Independence Day may have already passed us by, but the porchdrinking continues at a feverish pace. With several heat waves underway throughout these United States, it is only logical that we cool our hot bodies and fiery tempers with some cold brews. This is What We’re Drinking.
END_OF_DOCUMENT_TOKEN_TO_BE_REPLACED 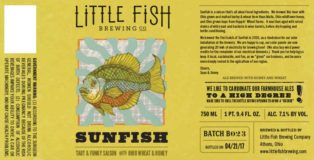 Little Fish Brewing sits at the western tip of Athens, Ohio, a small college town in the southwest region of the state. It’s at the very edge of town, with the county fairgrounds and a small state park separating it from the city proper and its compact and cozy downtown. The location geographically represents the philosophical space Little Fish occupies as a brewery, straddling the culture of the college town and the wilds of the southeastern Ohio Appalachian foothills. Little Fish Brewing Sunfish Saison serves as a shining example of the brewery’s dedication to conserving the resources found within that unique, beautiful location.

END_OF_DOCUMENT_TOKEN_TO_BE_REPLACED

It’s almost October. Why is it so damn hot outside? I’m usually a lover of spring and fall, so this unseasonable warmth has to stop. Instead of enjoying Porters and Brown Ales outside, I’m drinking Session IPAs and Pilsners in the air conditioning like some kind of animal! When will the insanity end?! In an attempt to stay cool and kill time while autumn drags its feet, I prepared a special double-issue for you to enjoy. Fire up the AC, pack yourself in ice and get ready to see What We’re Drinking.
END_OF_DOCUMENT_TOKEN_TO_BE_REPLACED

Have you ever taken an awesome beercation (that’s beer + vacation) to an awesome city, let’s say, an awesome city like Denver? And while you were on said beercation, you drank quite a bit of amazing beer, so much so that you needed to take a little break once you got back home from your beercation because it was just so much beer? But then all your friends started posting pictures of the delicious brews they were enjoying this past week and now you’re having some serious FOMO. Maybe it’s just me. If you’re in my position, hopefully these photos will ease your pains. This is What We’re Drinking.