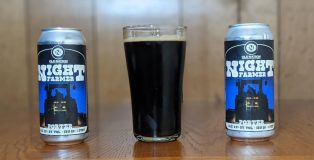 Old Nation Brewing Co. made waves a few years ago for their highly drinkable take on the New England IPA: M-43. What followed was a “New Orthodox” IPA series that has kept the brewery on top of best-in-beer lists. But the brewery ain’t no one-trick pony. Their Electron Brown and Over Privileged Stout have both been hits with beer enthusiasts and are a far cry from the Hazy IPAs that put them on the map. In what seems like a pattern of success, they’ve managed to create another winner with their newest brew, a 6.5% ABV Porter called Night Farmer.