Deschutes & Hair of the Dog – Conflux #1

The craft beer industry is a collaborative world. When the great minds of two breweries come together, the results are often twice as good. The barrel aged project between Hair of the Dog and Deschutes that results in Conflux #1 is an excellent example of this collaborative style.

When poured into a snifter glass, the beer pours a deep brown with red hues streaking through the glass. There is low carbonation and only a slight head rests on top of the liquid but dissipates quickly. Red wine, port and vanilla oak aromas leap from the glass. Unlike many of the barrel aged beers that I drink, there is no hint of the acidity or funk that would indicate brettanomyces or a sour character. The flavor leaves where aromas left off. Strong flavors of red wine strike the palate, followed by more mellow existences of whiskey and vanilla. The beer exhibits some caramel malt character that presents itself toward the end of the sip. The beer is medium-low body with just enough residual sweetness to not leave the mouth dry. The beer is incredibly complex. During the second sip, flavors of dark fruits and raisins present themselves. This beer is the tongue twister of all tongue twisters, the where’s waldo of the beer world. Its a good thing that I chose to write about this beer instead of describe it verbally. I am speechless and my mouth has no power to do anything besides remain lost in this seemingly impossible M.C. Escher-esque beer. 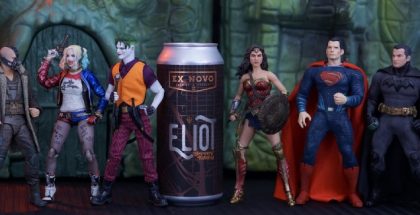