Jackie O’s Paw Paw Wheat has been a summer staple here in Athens for some time now. Kelly Sauber, a major influence in brewing in Southeast Ohio, first brewed Paw Paw Wheat in 2003, but only recently did it become available statewide. The 375mL bottles were released locally earlier this month and then sent out for distribution in other markets around the state. At $5.99 it’s not cheap, but this beer is well worth the cost. Within hours last Friday, the last 30 or so bottles at the Kenny Road Market in Columbus were gone.

The pawpaw is North America’s largest native tree fruit, and this region is home to some of the biggest and best tasting on the planet. The Ohio Pawpaw Growers’ Association has held the annual Ohio Pawpaw Festival in nearby Albany since 1999. It should come as no surprise then that the pawpaws used in Jackie O’s Paw Paw Wheat are locally harvested. Pawpaws tend to have a tropical flavor consisting of mango, banana, and cantaloupe, and while I’ve tried several other pawpaw beers that taste a lot like banana, mango is the standout flavor here.

Upon first opening the bottle, this beer smelled a little bit like a sour, but once it was in the glass, the scent was more comparable to an Orange Crush. Paw Paw Wheat pours a golden orange color with little to no head, and its clarity is similar to that of a hefeweizen, a little cloudy. At 9% ABV, it’s not the most sessionable, but it is extremely palatable. I highly recommend getting your hands on a bottle before they disappear. 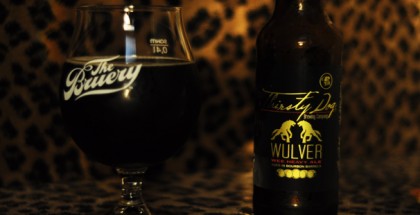