1984 was a hell of a year. I mean, seriously, look at that list. Teenage Mutant Ninja Turtles AND Scarlett Johansson AND Ghostbusters? You gotta be kidding me. Not to mention it was a leap year, the Olympics were in ‘Merica (the Soviets boycotted due to the Cold War and all), and crack was invented, leading to the wildly successfully “Just Say No” campaign.

It was also a big year for craft beer and for me. Laws passed under the Carter administration in the late 70’s paved the way, but the early 80’s were the true beginning of the proliferation of craft beer. A little book called The Complete Joy of Homebrewing was published and a little brewery was opened by the Widmer Brothers. Oh and I was born. To celebrate their 30th anniversary, Widmer Brothers Brewing has embarked on a series of collaborations with other Portland, OR based breweries. To celebrate my 30th, I figured I should just drink some.

I enjoyed their most recent release of Saison A’ Fleurs, brewed in collaboration with Breakside Brewery; a saison brewed with chrysanthemum, jasmine, and Szechuan peppercorns. First of all, I totally just nailed spelling those ingredients and I didn’t even look. Second of all, this is a really nice beer.

The beer pours a clear golden color with a malty, floral nose. Sweet malted barley and a touch of wheat is the dominant initial flavor but, true to its name, there is a pronounced floral quality to the beer. I recognize the jasmine from drinking Elysian’s Avatar Jasmine IPA, which is one of my favorites, but I’ll be honest I have no idea what a chrysanthemum tastes like. I assume that’s responsible for the slight difference in the floral flavors that I notice. The peppercorn is a bit sneakier, really not evident until a few second have passed after the initial swallow. But, it’s absolutely there and shows up more and more as the beer warms to room temperature, lending a nice spiciness that cuts through the sweetness of the beer nicely.

I’ve been asked several times leading up to my 30th birthday if I “feel older” or how I’m dealing with the milestone I’m faced with. I’ll be honest, I haven’t had any real epiphanies and I don’t feel any older than I did yesterday. But if 30 years in Scarlett is in a hit movie, LeBron is captivating sports fans with The Decision Part II, and Widmer is making beers like this one, I ain’t worried about nothin’ (note: French Montana, circa 1984). 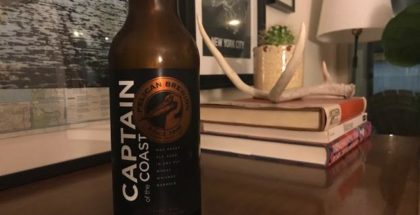