PorchDrinking made it to de Garde Brewing’s 3rd Anniversary to celebrate another year of world class wild beers, beautiful days amongst wild Oregon farmland, and the fantastic people that make it all happen. Read on to find out what was old, new, borrowed, and blue.

The alcohol enveloped pilgrimage to Tillamook began in Seattle on Sunday morning. Why you ask? I’ll tell you exactly why. I had 5 hours of driving alone to come up with the answer. De Garde Brewing is creating beer so good that it is making non-beer people into beer people, and beer people into obsessive, gotta-have-it, grab your pitch forks ’cause dG just released a new Imperial Xxxxxx Bu and we NEED IT NOW people. You’ll see what I mean later, but I digress.

I walked in late, and was bombarded by a couple of buddies who didn’t let me move forward until I feigned expressions of guilt and envy for missing multiple amazing beers that were poured at the start. Feeling bad about missing a good beer at de Garde is like showing up to Arizona and feeling bad about an overcast day. Yo, more sunshine is coming, like ASAP.

I was warmly greeted with a smile, a specially crafted 3rd Anniversary glass, and 5 blue tickets to ride the ferris wheel of delicious. Getting your goods and walking past this stand was like when you were 13 and the parents just dropped you off at the gate Six flags on the first day of Summer. It was time to indulge in Dippin Dots, and ride the Batman until you were dizzy as hell.

de Garde opens the door of their entire brewery for this event in order to accommodate the much larger than usual crowd.

A point of logistics that I had way too much fun with was the lack of a set tap list. Beers were poured at random times and locations throughout the many taps spread across the brewery. I don’t know with certainty why de Garde chose this format, but I do know what it prevents. Long. Ass. Lines. At other beer events, people start lining up 30, 60, 90 minutes before a certain beer will be poured. Who likes standing in lines for beer, after you’ve stood in a line to get in? No one. Besides maybe these guys:

So, the format works. But as mentioned, it allows for some fun forces in social dynamic to flourish via these 2 effects:

The Psychology of Random

The lottery, gambling, raffle tickets to certain beer events. All predicated on the excitement of potential winnings via random selection. Two of these things are multi-billion dollar industries precisely because the human mind becomes fixated on the chance of finding a reward amongst a mountainous pile of let downs. This concept was only partially in effect at de Garde, seeing as there was nothing I considered a let down. Rather, there were a few beers that were analogous to winning the lottery.

You are walking down the street and notice a guy staring up at the sky. You glance up, see nothing, and smugly murmur under your breath “Heh, what a blind fool” as you strut along. The next day, you walk down the same street and see thirty people staring up at the same point in the sky. This time you stop, turn and look at the point they seem to be staring at, confirming multiple times that you’re looking at the right spot by checking their gaze. 15 seconds of bewilderment go by before you drag your feet walking past them. “Man, am I a blind fool?”

There was nothing in the sky in either scenario. But seeing multiple people performing the same action gives it legitimacy and provides our brains with enough data to rationalize following the action. At de Garde, when you saw a group of people moving in one direction, God damn it, it was because they had the secret knowledge and pathway to the next blow-your-mind-to-smithereens beer and you didn’t, and you weren’t going to miss another one. Not this time.

My half sober idea consisted of exploiting the above to get a good laugh out of people. Three buddies and I were standing in a circle facing each other. “Guys, let’s start walking together towards the back tap station and see what happens. Have a look of intent on your face, and move like you mean it.” And so we did. And something like this is what happened…

When the mass of about 75 people passed the large rack of barrels where we waited, out of sight, they did not see bottles of 2011 Cantillion being poured. They didn’t even see a line. Looks of hurried anticipation quickly broke into laughs when they realized it was just 4 dudes standing there, cheesing with their glasses in the air.

Appreciating art is a highly contextual practice. Beer is no different. Therefore, it’s important to note the what, where, how and why of de Garde before delving into some of their creations. “It’s been sort of like a Cinderella Story” notes owner Linsey Hamacher. “We started this in our garage, and it’s grown into something a lot bigger than we ever expected.” Trevor, the head brewer, mentions that “we didn’t expect recognition from this. We did this because we were passionate about it.”

De Garde’s focus is on spontaneous fermentations inspired by the European farmhouse traditions. Not only does this rural Oregon brewery pay homage to the brewing styles of historic tradition, but they do so through taking full advantage of their surroundings while remaining mindful of their audience. “We want to brew the best possible beer based on the nature here, and embracing the historic traditions we are moving back towards. We also care about staying true to a fair price point so that everyday drinkers can enjoy the beer,” explains Linsey.

A unique ingredient in their beers is the naturally occurring yeast that floats all around us. De Garde does not add lab cultured yeast to their beer. Rather, they allow the natural yeast of their environment to settle in, and being fermenting their beer. These amazing, tiny, flying, alcohol-producing fungi are available in especially awesome quantities on farmlands like Tillamook.

Now a word from our cousins in the wine world on what makes the geography in which you create so important.

“Terroir: the idea that wine is chiefly a product of the physical environment (the soil, the microclimate) in which the grapes were grown, that matching the right grape to the right soil is the essential first step to making fine wine, and that a wine should not just taste good but exude a sense of place.” – Mike Steinberger**

Mr. Steinberger states that certain wines are great, chiefly because of their inputs. The French lands lend themselves to growing grapes in incredibly rich soil, and fantastic climate. In the same vein, de Garde’s surroundings, supportive flora, and access to the highest quality inputs are a critical component of their completed products.

Sure, the inputs are great. But I’ll argue that the inputs are only a means, not an end. It takes the minds, hearts, dedication, and finely tuned craft of people like Linsey and Trevor, to create something great from the inputs of a specific geography.

Without further ado, a highlight of a few of the beers available at the Third Anniversary event:

This multi-dimensional brew comes to us via collaboration of de Garde and Portland up-and-comers Great Notion Brewing. An insanely well put together melange of passionfruit sweetened by lactose, bittered with hops, and fermented with Lactobacillus. The visual is a golden yellow mango pulp. The taste of this Femme Fatale will seduce you in 5 different ways: a flavor dominated by sweet pineapple, tropical fruit and zesty tangerine, mild grassy hop oils, a touch of funk in the finish. After the 4th one, my mind was telling me no. But my body…

I’m partial to fruited sours. The under/overripe fruit tones. The tannins. The stunning colors imparted by the skins of the fruit. That’s why Imperial Raz Bu was the belle of my ball. A stunning dark pink color with shimmers of coral, the head faded quickly leaving behind minimal lacing. Fresh picked raspberries blast your nose before you delve into the much more balanced palate. The mild lactic acidity of the base beer rounds things out, leaving various levels of sour jam lingering.

Do beers poured out of Magnums just taste more epic? Probably. This lambic has had some time to do it’s thing in the bottle. Before that it was aged in oak wine barrels, and refermented on Oregon Black and Red raspberries. The liquid is reminiscent of a dark blue eggplant color; no head, but a touch of lacing. Berry, funk, a hint of lemon zest, and woodsy notes play throughout the flavor profile, none of which bullies the others into submission. The low carbonation makes for a pleasant change to some of the carb gushing monsters of the day. The marriage of farmhouse and forest present here works perfectly.

I didn’t see a single sad face in the crowd. Elated attendees weaved in and out of a sea of aging beers in barrels and foeders like clownfish buzzing through forests of kelp. Strangers in the crowd bonded easily. Making friends came naturally when you recognize you’re all there for the same reason.

It’s hard to imagine that it’s only taken de Garde three short years to create such a positive atmosphere, and dedicated following. When asked about what the next three years had in store for us, Trevor said simply: “Better beer always. We pay ourselves median wages so that we can reinvest everything back into our people and our commitment to progress.”

So how did Linsey and Trevor feel about the success of their 3rd Anniversary Event? Linsey’s eyes lit up when I asked the question. “This is absolutely insane! We are blown away by the excitement and support of our fans.” Trevor stated frankly: “We’re not making money on this event because preparing for it takes us away from brewing for over a week. We do this first and foremost because we love beer, and beer people.”

Finally, I asked what each would say if they could address every single person who attended the Anniversary Event or has supported de Garde Brewing over the years. 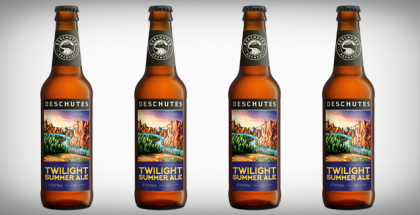 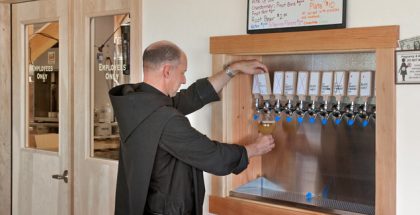