Welcome, boils and ghouls! Your pal, the Craft Keeper here, just “diggin’ up” some events for the week. Ah, what fun we will have. As the Brewmaster of Scaremonies, I’ll lead you along the way as this week’s events promise to be quite “wild” and will have all of your “heads” a-rollin with tons of beer releases, All Hollows Eve beer celebrations, and costume parties. Enjoy the spoils of our city and drive responsibly, kiddies!

Every Wednesday, CKBC releases a fun and interesting one off cask. This month is full of pumpkin goodnesses! Pumpkin pie flavored beers are all the rage and CKBC has been hit with the craze too!! So, this October, all of their Wednesday casks will be created with the pumpkin pie in mind! Everyone loved the Imperial Pumpkin Porter so much, they decided to dress it up and bring it out again!! This week’s cask is the 2014 Pumpkin Porter with bourbon soaked oak spirals. CKBC will tap a Bourbon Pumpkin Porter and pair it with Bourbon-Pumpkin Pie Bites (A mini pumpkin pie with tasty bourbon!). CKrêpes & CKatering here at 3pm serving up all your favorite gourmet cuisine items! 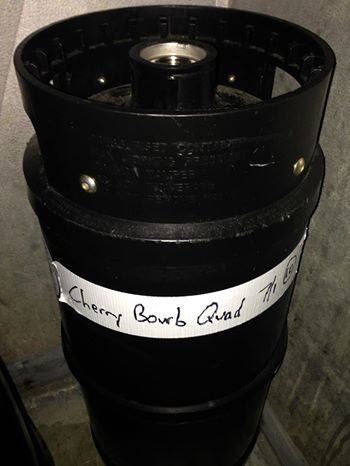 River North Brewery will showcase the absolute last keg of B-Side Quandary, hiding for over a year. Come drink it Wednesday at 3pm for Wayward Wednesday! They’ll also have classic Quandary and Big City Quad on tap as well…

Wednesday is $2 Craft Can Night from 5pm-close at Hops and Pie.  This week’s artist sando of the week is.Crispy Pancetta, Pesto Chicken, Balsamic Aioli, sundried tomato spread, baby arugula and provolone on a griddled house roll.

This October High Hops are taking a break from their “Firkin Hump Day” to release unto the world something dark and sinister, beers they discovered in the depths of Windsor, brews so evil that they are not sure that the small town is ready for them. They bring you “Ales from the Crypt.” Every Wednesday at 5PM. They’ll introduce one of the brews each Wednesday and on the night of All Hallows Eve, they will end the month will a special release to “appease the demons!” Try them all if you dare!

This Wednesday they’re releasing their “HOPrenomican DeaditePA!” In perfect homage to the Evil Dead films, High Hops rolls out this ale. “Klaatu, Barada…N…Necktie? Nickel?” This “brew of the dead” has enough hop flavor to appease the most primitive of screwheads with a nice balanced malt profile to make you feel “Groovy” …Good, Bad, you’re the guy with the beer! Keep an eye out for award winning food from Bottlecap BBQ too!

Buy the Round! Wednesday @ Our Mutual Friend (Five Points)

Buy the Round! Every Wednesday from open to close! Tell all your friends (to buy you beer). 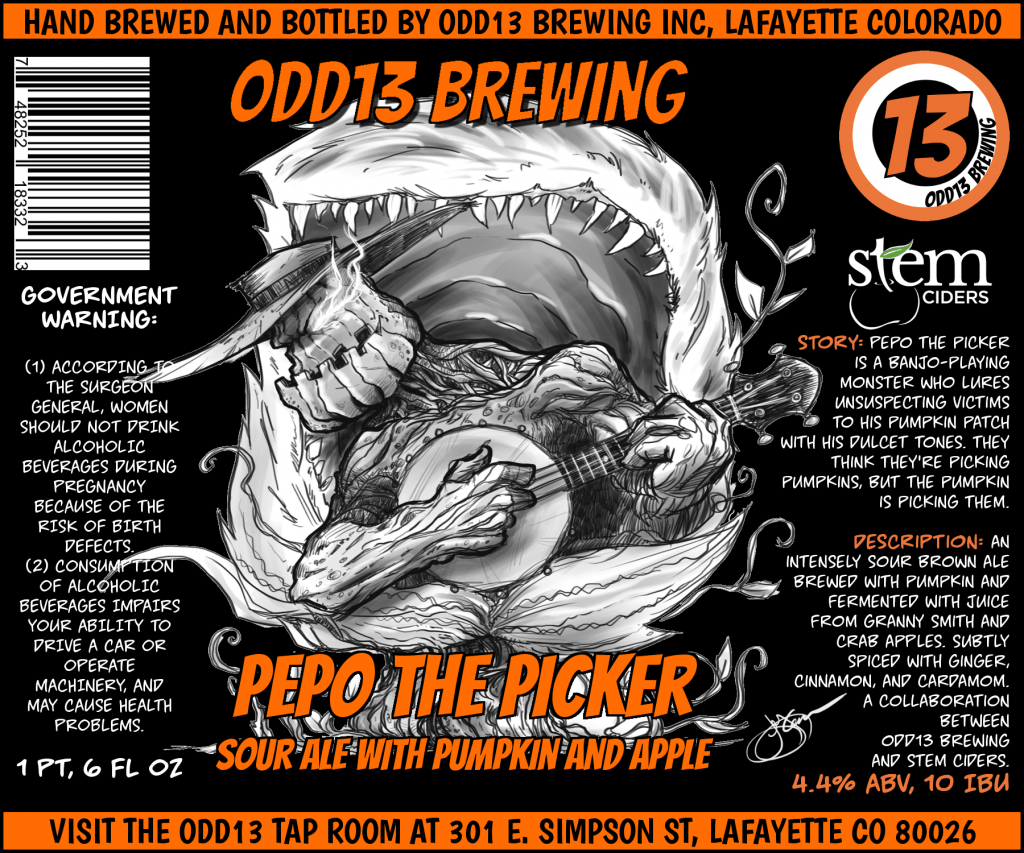 Ladies and Gentlemen, meet Pepo the Picker this Thursday! Odd13 will be tapping their highly anticipated collaboration sour ale with Stem Ciders. Pepo the Picker is an intensely sour brown ale brewed with pumpkin and fermented with juice from granny smith and crab apples. Subtly spiced with ginger, cinnamon, and cardamon. Bottles will also be available for purchase. #puckerup #pumpkinbeer

FIRKIN! It’s Firkin Friday at Dry Dock, where the brewery taps one of their beers that’s been cask-conditioned… usually with a twist! This week, they tap a Spicy Apricot Blonde Ale! 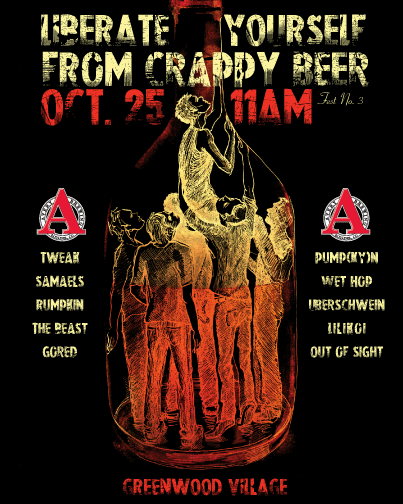 This is the third installment of their “Liberate Yourself from Crappy Beer Fest” and it’s going to be loaded with crafty drafts from Avery Brewing Co. Explore some tap room only offerings that are sure to shore up any doubts you may have had about Avery Brewing, if any. They’ll be tapping Tweak, Lilikoi, The Beast, Samaels, Rumpkin, Gored, Pump(KY)n, Wet Hop, Out of Sight and Ellie’s Brown Ale Chai. This is going down at their Greenwood Village location. #AleYeah 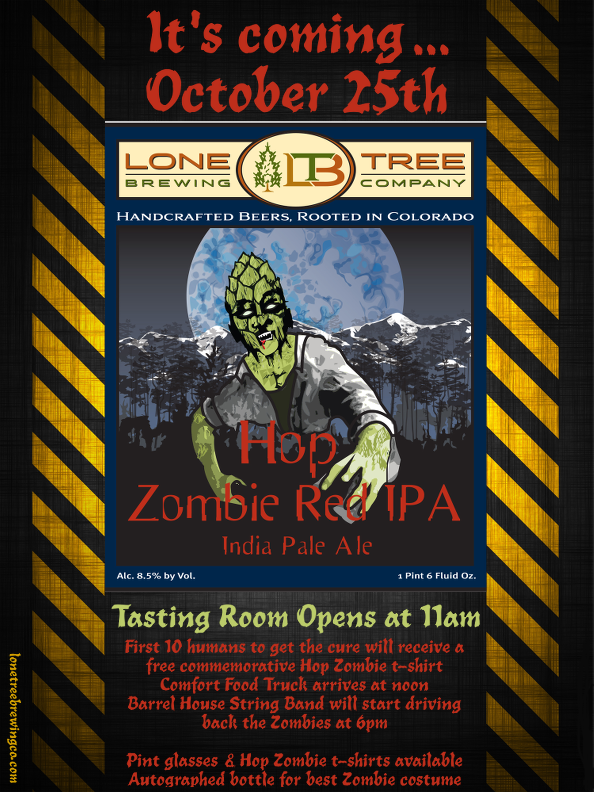 Lone Tree Brewing will begin selling 22-ounce bombers of its seasonal Hop Zombie Red IPA ($10 each) today from 11 a.m. to 10 p.m., or while supplies last. Only eighty cases will be available and, “based on last two years of sales,” they’ll sell out early, the brewery says. A small amount of the 8.5 percent ABV beer will be available in the taproom after that. The first ten people in the door today will get a commemorative Hop Zombie t-shirt. They will have giveaways…Zombie costume contest…T-shirts, pint glasses and hop zombies available for purchase. Fabulous food from CFTDenver – Comfortable Food Truck and music from Barrel House String Band! Last year the line started at 10:15am…draught was sold out by 2pm and ALL bombers were gone by 6pm!

Dry Dock Brewing in Aurora and the nearby Wing Hut will host their third annual Dante’s Wingferno Challenge today at the brewery from noon to 4 p.m. The wings-eating contest typically involves fifty to seventy people who all try to eat eight super-spicy wings (and Wing Hut has been working on a new, hotter sauce recipe) in five minutes. You can register on the Wing Hut’s Facebook page; it costs $10 in advance and $15 online. All proceeds go to the Aurora Fire Department, many of which plan to compete! Time to burn your lips, mouth, stomach, and whatever comes after that. Complete the challenge and get a free t-shirt. 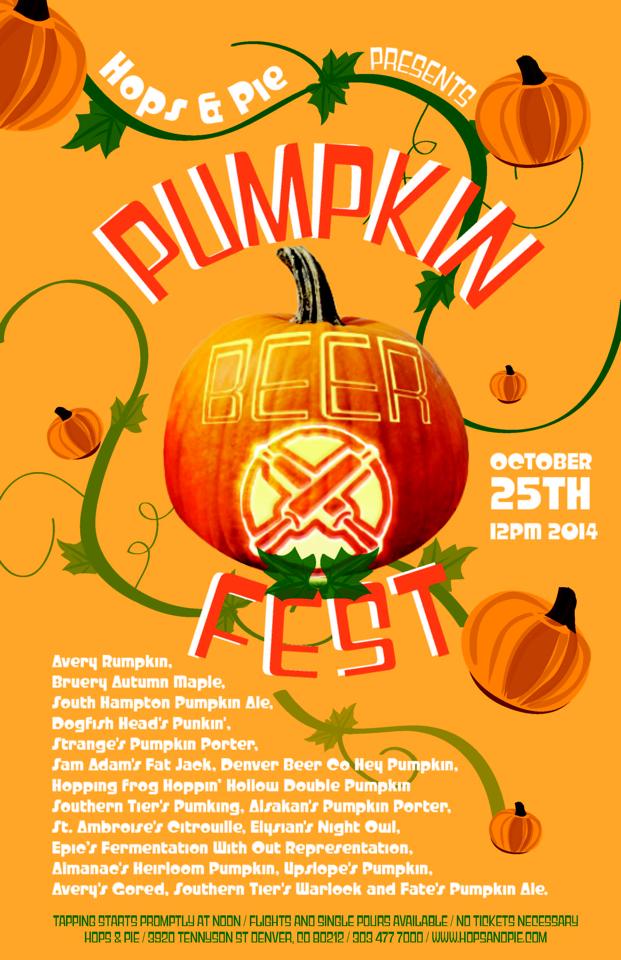 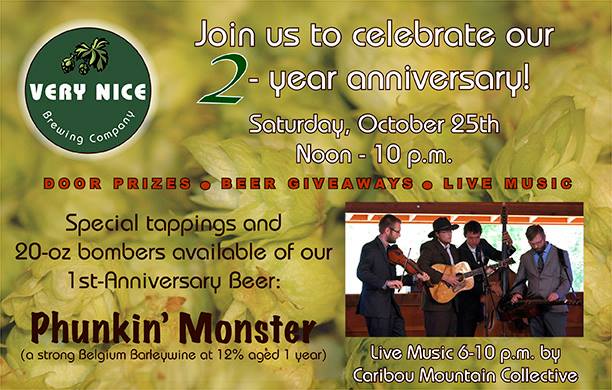 Join Very Nice Brewing as they celebrate their 2 year anniversary. The event runs from 12pm-10pm. They will have lots to do and lots to drink. They will have 20oz bombers of their 1st anniversary ale, the Phunkin’ Monster, for sale and many other special tappings. Join them from 6pm-10pm to catch the Caribou Mountain Collective, from Boulder as the put on a great show including some bluegrass, folk and Americana music. What better way to celebrate the weekend then to hang out at Very Nice Brewing and enjoy door prizes, beer giveaways, music and, of course, great beer! 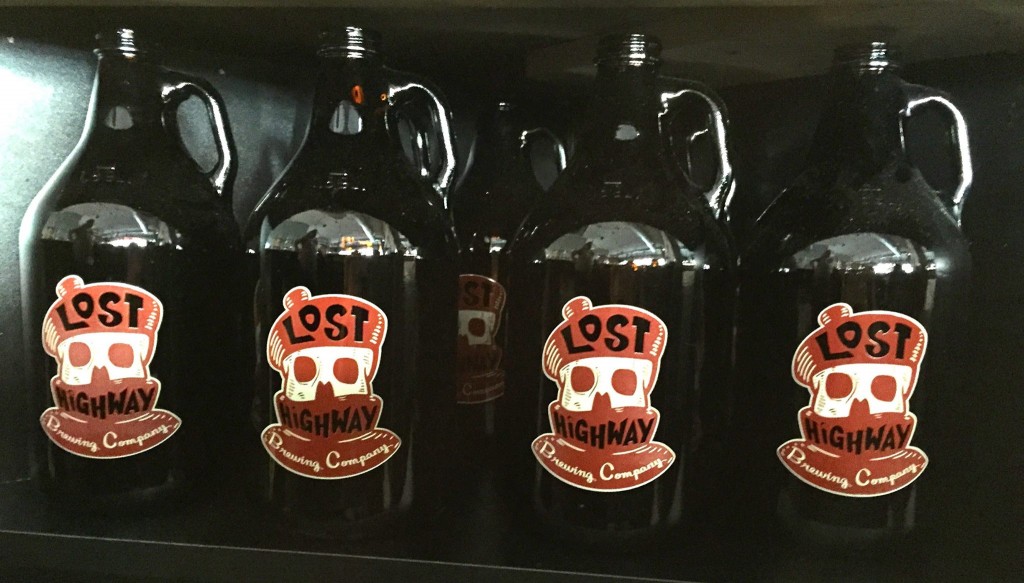 They are finally open. After three years of planning Lost Highway Brewing Company has opened their doors. They are having a Grand Opening party from 12-6PM with live music from Jim Dalton of the Railbenders, chile roasting, food and more. Founded by the owners of the Cheeky Monk Belgian Beer Cafe next door, Lost Highway has six of its own beers on tap: District 6 Pils, Grave Robber Fraud Quad, Golden Ghost Blond, Pumpkin Ale, Belghost IPA and Longest, Wickedest Wit. 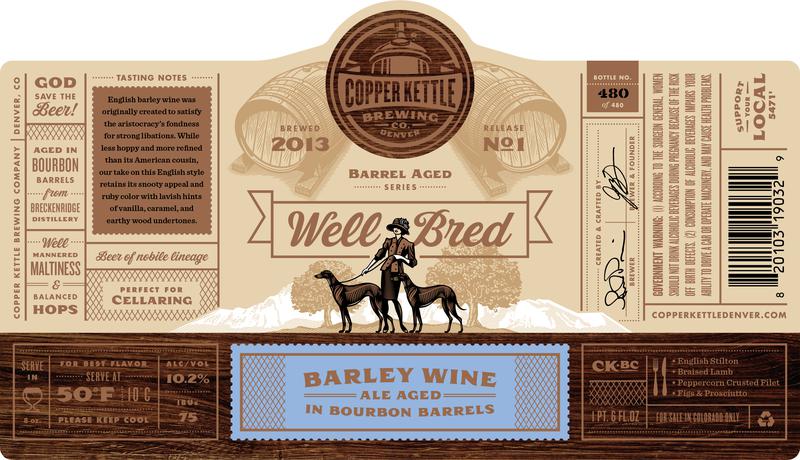 Copper Kettle has announced the release of the 2nd year of “Well Bred”, the company’s Barrel Aged Barleywine. This seasonal bottle will release on Saturday, October 25th, 2014, starting at noon when Copper Kettle’s doors open. An English Barleywine, rich in malt with hints of vanilla and caramel, also aged in Breckenridge Distillery bourbon barrels. This English Barleywine is far maltier than its American counterpart. 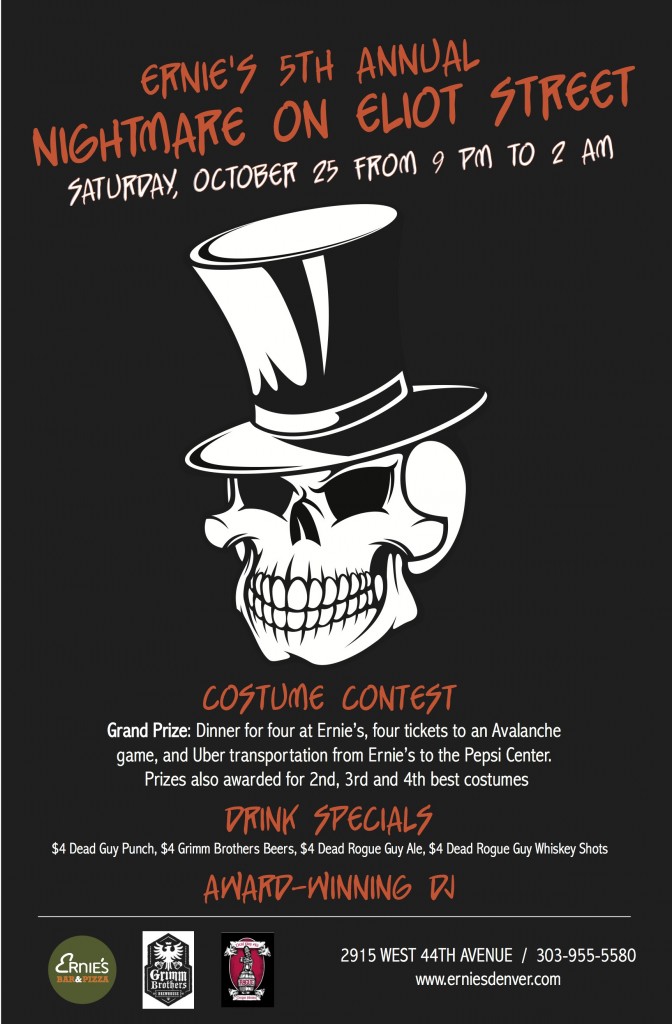 Join the Ernie’s crew on Saturday, October 25th for their 5th annual Nightmare on Eliot Street at Club Ernie’s and celebrate Halloween. We’re holding a costume contest… the grand prize is a Dinner for four at Ernie’s, four tickets to an Avalanche game, and Uber transportation from Ernie’s to the Pepsi Center. Prizes also awarded for 2nd, 3rd and 4th best costumes! $4 Dead Guy Punch, $4 Grimm Brothers Beers, $4 Dead Rogue Guy Ale, and $4 Dead Rogue Guy Whiskey Shots.The party goes from 9pm to 2am! See you there. Cheers.

Colorado’s rich brewing history has its roots in more than a century of brewing that took place as miners populated the western frontier. Barley’s Angels, a group devoted to providing beer education and social events for women, is exploring this history with an event in Golden that features Beer Historian, Dave Thomas, and his book “Of Mines and Beer, A History of Brewing in 19th Century Colorado.” The event includes lunch, beer taster samples, and a visit to AC Golden on the MillerCoors campus. Tickets are very limited, and men are invited if they are the guest of a female attendee. 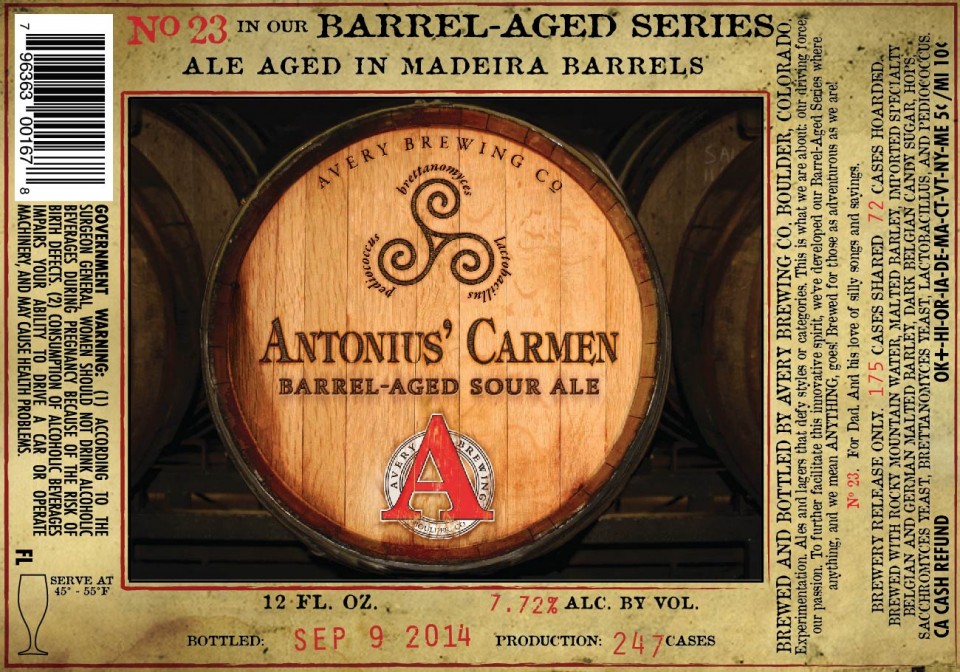 “No. 23. For Dad, and his love of silly songs and sayings.” Only 291 cases produced, so this is a brewery only release! Bottled Oct 14, 2014, Bottle sales begin at 1pm. Each bottle is $12 per 12oz. Rare beers on draft starting at 11am featuring: Drew’s Fuzzy Peach, Karmarita, Papa Sour, Eremita V, The Preacher, 2013 Mephistopheles’ Stout, and Vanilla Bourbon Coffee Chocolate Stout.

Today is Double Stamp Tuesday at Funkwerks. When you purchase 1 bottle from their taproom you’ll receive 2 stamps on your bottle card. That equates to Buy 6 Funkwerks bottles, get 1 for FREE! We think you should probably pick up a couple bottles of the Raspberry Provincial; afterall, it did just win another gold medal for the brewery this year at the Great American Beer Festival!

Thanks for joining us for another installment of PorchDrinking’s Weekly Denver Beer Beat boils and ghouls. The Denver Beer Beat brings news of openings, special tappings, firkins and one-off batches, bottle releases, dinners, pairings, anniversaries, tap takeovers etc. each and every week.