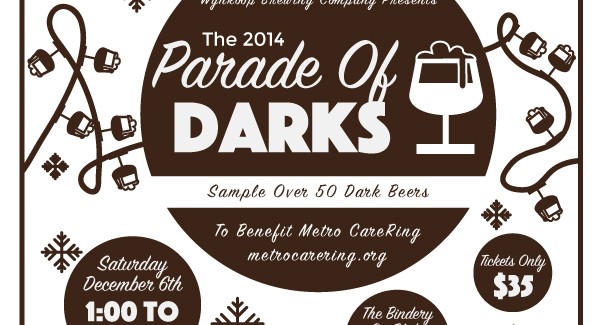 Parade of Darks, the beer festival for lovers of ambers, porters and stouts, will return for its fifth year on December 6 from 1-4:30 PM. Wynkoop Brewing Company has changed the location from their downtown brewery to the Bindery on Blake (2901 Blake St.). Your $35 ticket includes unlimited samples of more than 60 brews from 25+ breweries, a commemorative festival tasting glass, and that warm feeling inside that comes from knowing all the profits go to Metro CareRing.

After attending Parade of Darks a couple years ago, I look forward to this year’s event, sampling an even larger array of quality beers. I remember talking with the brewers and brewery reps in a smaller, more relaxed setting than most beer festivals. The combination of incredible brews and the goodwill everyone has during the holiday season made the festival something I was excited to continue being a part of.

The previous Parade of Darks events have raised more than $40,000 for Metro CareRing, and this year Wynkoop will again donate 100% of the profits to Metro CareRing. The festival moved to the Bindery location to accommodate more participants in a larger setting.

If you have not been to a Parade of Darks before, Andy Brown, the head brewer at Wynkoop, said “Craft brewing is an art form and this festival really highlights experimentation and adventures in brewing. You will see a wide range of beers like barleywines, porters, stouts, and sours, all dark in color, all in one place.”

Needless to say, you must be 21 or older to attend Parade of Darks. In addition to the beer festival, Parade of Darks will have a silent auction, including gift certificates and packages from local stores and restaurants. Proceeds from the silent auction will also benefit Metro CareRing.