March is here, which means Spring Skiing! After the abysmal weather on the east coast ruined three separate ski attempts, I’m FINALLY getting a chance to get on the slopes in the East Coast. While the East in general has a reputation for tighter runs and icier conditions, they balance that out with community minded hills and a bit more of hellfire spirit (how else do you explain Bode Miller?). Few places embrace that spirit more than Mad River Glen, who provide the namesake to Magic Hat’s Single Chair Golden Ale.

Home to one of the only two single rider chairlifts in the world (the other is located on Mt. Eyak in Alaska), Mad River Glen was founded with the idea of creating a space for skiers that limited commercialization. Their “ski it If you can” slogan speaks not only to the hill’s difficultly, but also to the fact their riders are fully focused ion the beauty of nature and the joy of skiing as opposed the carnival atmosphere of other resorts.

Magic Hat, in an effort to replicate the dedication to the pure love without the bells and whistles (or with beer, the multiple hops and crazy ingredients), have developed a great Golden Ale that’s perfect for outdoor decks and tailgates from the Rockies to the Adirondacks. When the spring weather starts making the snow soft around 1 p.m., your legs are burning by the time you get off the hill. You need to sit outside in the fresh air, catch a little tan, and get a little drunk. Any beer too intense, and you’re 100% likely to fall on your face. Perhaps due to the fact their within a hour of multiple ski hills, the good brewers at Magic Hat took all that into account and have created a craft alternative to the regular resort offerings of Coronas and light macrobrews.

If you have to drink it out of a glass, Single Chair pours light gold and doesn’t retain any head, but you really should be drinking this out of a bottle.

Single Chair carries a light aroma, mildly of sourdough bread. Taste-wise it has a medium body, heavier on barley and with a slight yeast spice. Unlike a lot of it’s competition, Single Chair has very well carbonated, keeping it bright and bubbly. The Pilsner malt is evident as well towards the end of your sip, adding a sharp finish. Infinitely sessionable, Magic Hat succeeds in their goal to create a beer that celebrates the simplicity of the ingredients and how they can add up to a highly enjoyable experience. 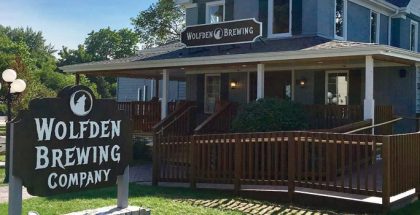