I stumbled across Backcountry Brewery when I was at Great American Beer Festival (GABF) a few weeks back. Their range of annual and seasonal beers combined has won six gold, silver and bronze medals at GABF from 1998-2011. But, what really put Backcountry on the map? In 2011, they submitted six beers for competition at the Colorado State Fair and all six received medals. Pretty impressive, if you ask me.

The 1996-year-old brewery and restaurant is located in Summit County on Main Street. If you’re like me and on your way to a ski resort out west, you are easily passing this place without knowing it.

When you are outside the brewpub, you are seeing an 8,000 square foot structure of log, stucco and stone. Upstairs there’s a second floor deck that displays nice mountain views.

Brothers Charlie and Joe Charlie Eazor purchased the brewery and restaurant in 2011 with plans to expand their distribution without compromising the quality of their craft beers.

Charlie explains what makes his beers unique and win awards.

The owners have been getting frequent inquiries from distributors in several states as well as bars and liquor stores in Colorado based on customer inquiries.

“As we begin packaging and distributing on the Front Range the end of this year we will start to address these requests. We are in the midst of a substantial brewery expansion that will include an automated bottling system and tripled capacity.” Charlie said.

What do you do if you want a Backcountry beer but don’t want to actually travel that far to get one? For those in Denver, you may be able to pick up a brew at Falling Rock Tap House, Freshcraft or Hops & Pie. If you are interested in a bomber, try visiting Grains Wine & Liquor (Denver) or Union Wine & Spirits (Lakewood). 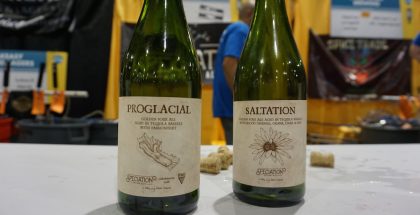