Inceptus, a wild ale from Three Taverns Brewery in Decatur, Georgia, is on the short list of good things to come out of a rather ugly situation in Atlanta last winter.

It’s been more than a year since the so-called Snowpocalypse strangled the city. It was a terrible day — the perfect combination of government officials not believing meteorologists, and the snow (gasp, Southern snow!) starting around noon when people were at school and work. Every big business and school district released early, never realizing the influx of traffic on already-iffy roads would leave hundreds of thousands of people stranded on highways and interstates for the next 12 to 24 hours. Hundred ditched their vehicles and chose a cold, dark, wet walk home. 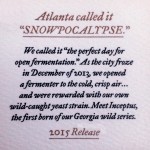 While the situation left most people in Atlanta angry and numb, Three Taverns Belgian brewmaster Joran Van Ginderachter walked into work “grinning ear-to-ear,” as the brewery puts it.

He knew the crisp winter air created ideal conditions for open fermentation — the process of capturing wild yeast from the elements, which is one of the pillars of Belgian brewing. After aging in North Georgia wine barrels, the beer became Three Taverns first sour release, aptly dubbed “Inceptus,” which is Latin for “beginning.”

The brewery rolled out Inceptus bottles in a limited release on August 23 (under much different weather conditions than the days it was created).

Outdated laws or not, #CraftBeer is going "Wild" in the South @ThreeTaverns #Inceptus #GAbeer pic.twitter.com/QRp86514VJ

(MORE: Georgia’s Three Taverns Craft Beers Is a Brewery with a lot of Heart)

Inceptus pours a golden, slightly orange hue into your glass. A foamy lacing of a white head whips neatly on top as the carbonation sends tiny bubbles fizzing from the bottom of your glass to the top.

The smell of that tart, wild yeast, captured from Decatur that cold day hits your nostrils, following through to the first sip. Inceptus is delightfully sour, but certainly not overly tongue-puckering. It makes me believe people who aren’t quite into sour beers yet will find this beer to be a delightful introduction.

Three Taverns released 900 bottles of Inceptus, along with limited kegs in its distribution area. While it may be hard-to-find, take solace knowing that the brewery is promising more wild ales to come. That is something we can all cheers to. 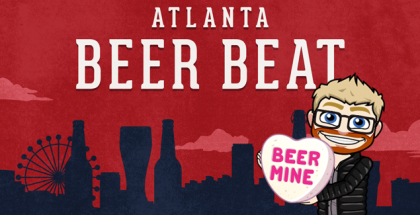 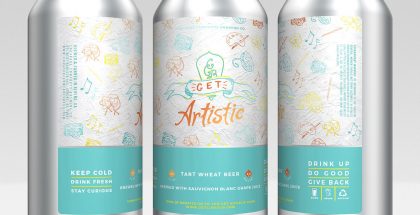