In the 1920s, industry was booming in Detroit. The car companies were producing jobs for the area faster than they could be filled, and the 18th Amendment turned Detroit, with its thin water barrier between the glory land of Canada and dry United States, into one of the most important towns for liquor running and bootlegging. In Detroit, the Purple Gang (run by the Bernstein brothers) was the most ruthless and terrifying group of people you could run into. Known for their general lack of discretion and ability to do anything from kidnappings to murder for hire and bombings, The Purple Gang was vicious enough that Al Capone stayed in Chicago and bought off them rather than attempting to battle them for territory. Eventually their complete disregard for covering their tracks got them caught and led to the group dismantling, but not before becoming notorious enough to make appearances in Elvis Presley’s Jailhouse Rock and multiple James Bond books.

Based in the Rivertown District of Detroit, on the same streets these intrepid gangsters brought their booze through back in the 1920s, Atwater Brewery decided it was time to pay homage to this bombastic time in Detroit and alcohol history with Purple Gang Pilsner.

In glass, Purple Gang’s a very sunny straw color with heavy, visible carbonation and an intial shock white pillow of head that would make the old guard approve. Also to form, the head maintains itself as a level above “lacing” for the whole drink. Appropriately for its namesake, Purple Gang is a real unruly pils. Atwater says they wanted to provide a bit of the “danger” that drinking and bootlegging carried with it in the 1920s and that wallop of spiciness at first taste is a definite shock to the sleepy tongue. I first tried it while eating Indian food and assumed the food had ruined my taste buds, but there’s a whole lot of cumin/curry action going on. It goes down with a mid and after taste that’s both floral and lightly touched with honey and lemon.

For Pilsner fans, the German style’s grainy quality lends itself easier to fall weather compared to the Czech crispness. Purple Gang though, captures enough of these last days of sunny weather and warm temps. Having received a silver medal at GABF, I definitely recommend you get your hands on a six pack to send the warm weather off in style. 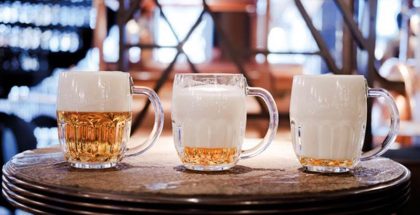