Put on your yarmulke, it’s time for Chanukah. If you need some ideas for what beers to drink during the holiday we’ve gone ahead and compiled a list of the Eight Beers of Chanukah. Now, whether you drink all eight on the first night or have one each night of Chanukah, make sure you try them all.

Some of the beers were chosen simply because the name insists on them being enjoyed during Chanukah. Others go perfectly with traditional Chanukah foods. Either way Chanukah is a festive holiday with lots of eating and drinking so what better way to celebrate than with a variety of great beer.

Of course the makers of the He’Brew series have to have a couple of mentions in an article talking about Chanukah beers. Believe it or not this beer hasn’t been around long, in fact it made its debut in 2014. This dark ale is brewed with eight different hops and eight different malts to create a really warm-feeling beer perfect for the season of Chanukah.

With no added spices you’ll get a strong nutty flavor that is balanced by notes of caramel and a slight chocolate taste. With an 8% ABV just a couple of these will really get your Chanukah party going.

Yes, we could probably fill this entire list with beers from Shmaltz. The He’Brew series has a long list of beers with clever names that would make anyone laugh. The reason Chanukah in Kentucky made the list is because of its uniqueness.

This barrel-aged beer was just released from Shmaltz this year. It’s a dark ale barrel-aged in Heaven Hill and Jim Beam bourbon barrels. This time of year screams barrel-aged beers so to see Shmaltz getting in on the trend is really cool. I’ll admit I haven’t had this one yet but, between the name and aging process, I want to get my hands on one. It comes in bombers and draft only, so look for it and add it to your holiday celebration. 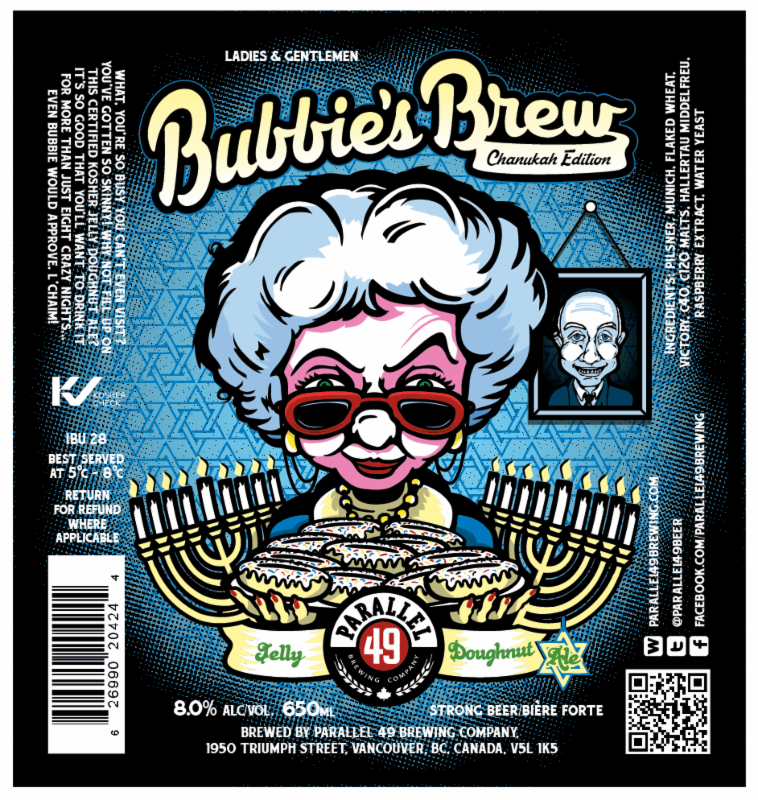 This beer has everything to make the list of beers to drink during Chanukah. It has a great name but then the beer will pair nicely with the jelly doughnuts you eat during the holiday.

This fruit beer features a strong raspberry flavor and smell but the beer itself is very light and easy to drink. The red color reflects just how much raspberry is in the beer – the sweetness in the taste might be overpowering to some but overall it’s exactly what you would expect from a fruit beer that uses so much fruit during the brewing process. 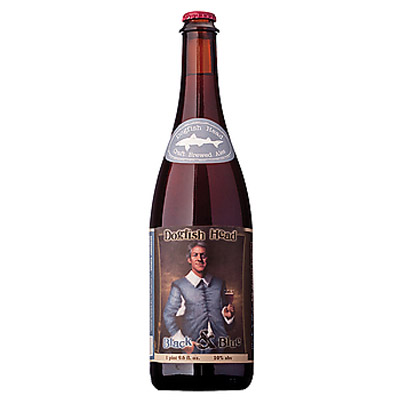 Potatoes can be paired with just about any beer it seems like. Their flavor profile can be adapted so much in how you prepare them that so many beers would go well with them. Assuming you have latkes (potato pancakes) at your Chanukah, and if you don’t what is wrong with you, you’ll want a nice light beer to go with these fried treats.

I chose Black & Blue to go with the latkes because the blueberry and blackberry notes will contrast nicely with the fried potato taste. This golden ale uses real fruit and not fruit flavoring so you don’t get that artificial smell and no taste in the beer. From aroma to taste you get a nice blend of fruit throughout. Be careful of the 10% ABV, you’ll want to make sure you’re eating plenty of fried foods to combat the heavy alcohol content in this beer. 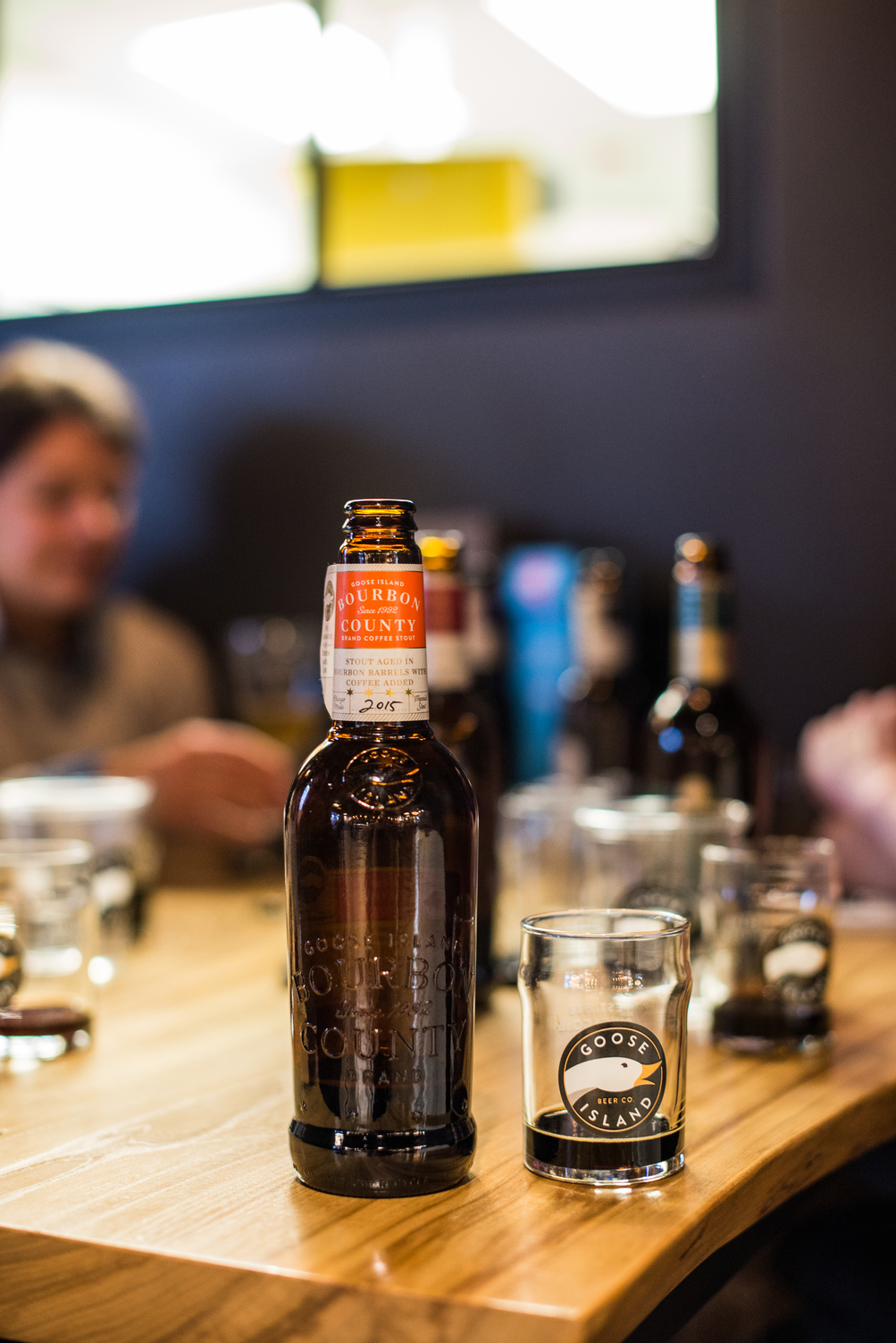 This year’s coffee variant of the popular limited release features Intelligentsia Los Delirios beans  and possesses a strong coffee flavor. You won’t get much alcohol in the taste which makes this beer perfect to go with your doughnuts. The biggest issue will be actually finding this beer as it’s one of the harder beers to find this time of year. Hopefully you got yours on Black Friday. 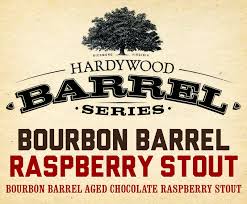 Chanukah gelt is about the worst tasting chocolate known to man. But despite the awful taste each year every Jew gets a bag of it and eats it all. This year improve the taste of the chocolate with a delicious raspberry stout.

I choose Hardywood’s raspberry stout because it also has nice vanilla undertones. Combining the vanilla flavor with the pronounced raspberries in the brew will be a great complement to the chocolate. Think chocolate covered raspberries with a vanilla aftertaste. That sounds delicious to me and that’s why you should definitely have a raspberry stout with your Chanukah gelt this year.

The main course of any good Chanukah dinner is brisket. That’s not an opinion – that’s a fact. With my brisket I like a more bitter beer to really give a contrast to the saltier meat. The combination of a sip of beer then a bite of brisket keeps the flavor profiles fresh throughout the meal.

I chose this amber ale because it’s not sweet. That’s the last flavor I’m looking for with my brisket. I want something that’s bitter with nice caramel notes and an overall earthy feel. That’s what I get from Nosferatu and while you can get creative with what ale you choose give this one from Great Lakes a try.

If for some reason you don’t have brisket at your Chanukah dinner I forgive you. I’m guessing you have chicken then, right? The great thing about chicken is that it’s so versatile to pair with beer. There really is no wrong beer to pair with chicken but I wanted to go with a pilsner because that way it won’t overpower the chicken.

Since chicken can be made hundreds of ways, the lightness of the pilsner is a safe bet because it will go nicely with everything from a more traditional roasted chicken to an “experimental” chicken recipe my mom is known to make. I feel like pilsners aren’t talked about much in the craft beer world because of their simplicity. Hometown blonde has a nice flavor complex for a pilsner that will go well with whatever chicken you’re served. 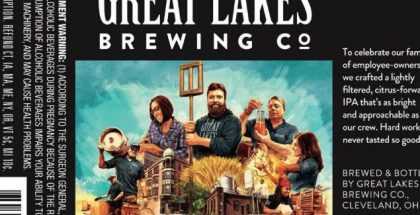 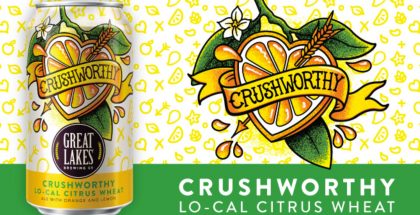