In what can only be described as the next chapter of Budweiser-y moves, Anheuser-Busch InBev has re-branded its domestic lager for the summer from Budweiser to “America”. Yes, you read that right, somewhere Frat-stars, and Nascar enthusiasts just got a chub at the thought of consuming an entire summers worth of bald eagles, fireworks, and ethnocentrism in a can. The Anheuser-Busch InBev announced this morning that their iconic Budweiser brand, will be re-named “America” for a limited run through the November election cycle.

The combination of the upcoming Summer Olympics, the on-going election, and the annual celebration of America’s birth, serve as the perfect platform for AB’s gimmicky re-branding. Ricardo Marques, a Budweiser executive noted that this is “maybe the most American summer ever.” It should be noted that Budweiser’s parent company, Anheuser-Busch InBev, is a Belgian-Brazilian owned company.

Big Beer’s most iconic can design will also get other patriotic updates throughout its label design with phrases like “E Pluribus Unum” replacing “The King of Beers”, “The World Renowned” changed to “Land of the Free,” “AB swapped out for “US” and “Anheuser-Busch, Inc.” switched to “Liberty & Justice For All”.

While, the beer conglomerate cites nationalism as the main cause for rebranding, Budweiser and Bud Light collectively saw a 5% Q2 dip in 2015, which could serve as a greater reason for the design and branding change. Bud Light also got a makeover at the start of the year with new label designs 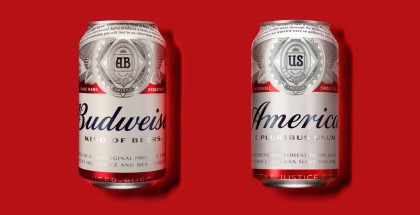