After getting my head around the crazy amount and pure quality of beer offered, our Barleys Angels group was walked through a brief history of how smoked beer came to be. Although nowadays smoked beer are not all that prevalent, back in the day all beers actually used to be smoked. Malts were dried out using an ancient kilning method and the smoky flavors were then passed along to the beers they made.

The legend of Rauch goes that the first smoked beer was actually a result of an unfortunate monastery fire back in the 1405. The fire did not damage the grains but it did give them a nice smoky flavor. The monks, not wanting to waste the hops, then made a beer with those hops and a new type of beer was born: The Rauchbier. After drinking in all this new knowledge of beer history, we got to drink some.

First up was Waddle by Off Color Brewing and HammerHeart Brewing Company‘s Herbstklagen. Waddle is Off Color’s only Oktoberfest tap – and it’s honestly everything… Deliciously sweet and caramel flavors jump out with a malt undertone. But lets be honest, we’re here for the smoke – and Hammerheart’s Herbstklagen does not disappoint. This cloudy amber has a distinct bacon, bonfire smell. First taste, like its smell, is velvet and smoke with notes of sweet caramel malt and toffee. Links paired these tastings with a smoked and unsmoked version of their chicken sausage accompanied with homemade stout, honey and jalapeño mustard to boot. 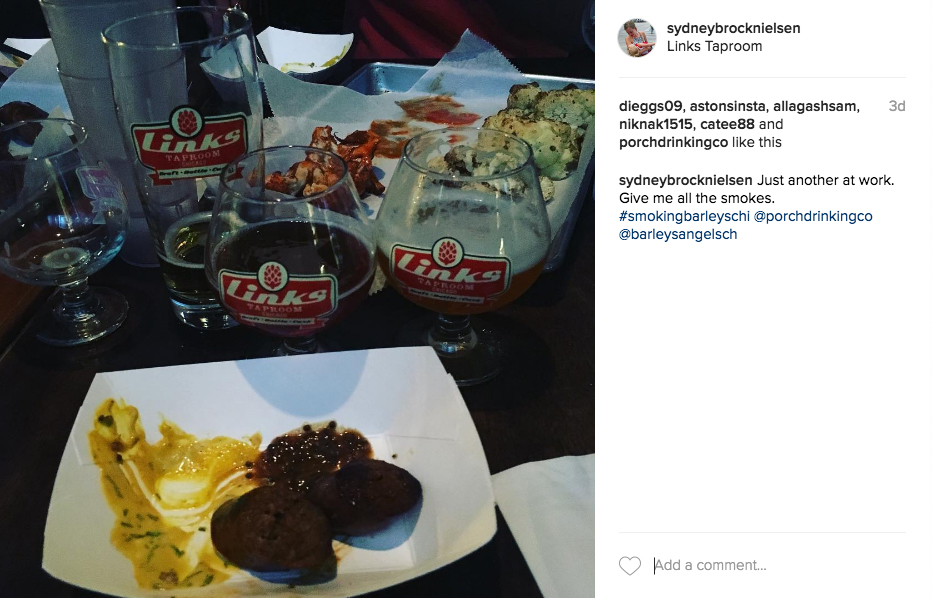 Next up was Stone Brewing‘s Enjoy by Tangerine and another smoked beer by Hammerheart, Surtr’s Flame IPA. All of us were extremely excited to try Stone’s Enjoy by Tangerine, as it is literally made with pureed tangerines… Yum. It also needs to be drunk quickly, generally within 37 days. Good for me – as I’m really good at drinking fast. This strong IPA tastes of pine and caramel but not much of a tangerine, just a slight citrus flavor at the end. As for the Surtr’s Flame IPA, if you-re not 100% sold on a smoked beer, I highly recommend this one. This IPA is made with both cascade and centennial hops and offers up a fresh, if not somewhat bitter, beer with only a slight smoky aftertaste. Not sure if they’re ready to jump into the world of smoked beer? This is a great gateway brew. Accompanying these tasty beers, Links served up some incredible chorizo sausage (both smoked and unsmoked) again with the aforementioned house made sausages.

As always, this was another great Barleys Angels event. If you’re currently experiencing serious FOMO and interested in checking out their upcoming events, visit their Facebook page and take a look at whats coming up. November’s event will be held at the Harold Washington Library and Monk’s Pub. The Barley’s Angels are going to be walked through the history of beer in Chicago exhibit at the library before heading over to Monk’s to enjoy some drinks and appetizers. Bringing in the holiday season, on December 10th Barleys Angels will host their annual “Beer Slay”. This event sells out very quickly, so act fast!

And feeling a bit of Links FOMO after hearing about these smoked beer? Well, lucky for us, Links also has an amazing selection of rare beers. Links recently launched Moby Dick Mondays. Every Monday that tap 36 is empty, they tap a new Whale Beer! Take a look at tap 36 to see what rare whale beer is currently on tap. Once this is gone, its gone – so act quick. Also, feel free to check it out on social #LinksWhiteWhale.

Needless to say, there is plenty on the schedule for Chicago beer lovers in the coming weeks. Take advantage – and we’ll see you there!