This time around, we have a scrappy, injury-laden team many have considered underdogs the entire way by almost all the sports analysts out there. But we like it that way. It’s just like Cleveland to be a fly in the ointment, the ones who people count out immediately. So in this Ultimate 6er we include  some of the best of Cleveland’s beer scene – with a few surprises that some people may not have considered to try as they head to their favorite bar to check out the Tribe battle with the best of ’em, or perhaps even watching the games in the comfort of home with a few close Cleveland Indians baseball fans.

Named after the famous drummer out in the Progressive Field bleachers for every Cleveland Indians home game, John Adams, this malty and slightly hoppy red ale is a perfect pour for a thrilling visit to the ballpark. It’s been there almost all season. I’m hoping that the brewpub will have it on tap for all those, like me, who are not lucky enough to posses the thousands of dollars for a standing-room-only ticket.

Nothing says a baseball game like a nice golden pilsner, and this is what we have by Platform, though we do have a flair of hops in this sudsy specialty. It is reminiscent of the fight and grit that the Indians have shown this postseason despite the seemingly endless injuries that have plagued the team, notably the pitching staff. After a few of these babies, I’m sure that even the roughest injury will feel bearable. Trevor Bauer’s a testament to gritting through a horror-movie laceration to his pinkie, after all.

Hopefully we won’t have any headhunters on the field. But in our glasses, yes, that’s what we want: A lot of ferocious hoppiness, and a excess of pine and citrus. We all need to be reminded a little bit of summertime in our beers from time to time, and what more refreshing way to do it than with this in-your-face pint from Fathead’s? So pour a few of these on the couch, since if you have a few you may not want to drive for a bit.

Of course, the C doesn’t stand for Chicago or the Cubs. It actually doesn’t stand for Cleveland either, but why not claim that last one to be true for this upcoming week? To be fair, the Cs are for the four types of hops found in this biting and bristly brew: Cascade, Centennial, Columbus and Chinook. The beer is perfect to have as you sit around the tube at a friend’s and watch the games transpire over the weekend over in Chicago. I think we can claim these four Cs for us and leave it at that.

Though the name probably isn’t a nod toward our ball club, I’m going to claim it as such for this review. Forest City Brewery is one of the newer and lesser-known faces in the Cleveland beer scene, but it’s a very welcome one. Notice a trend in the flavors of the beers I have chosen? Another beer with a healthy heaping of citrus, Tomahawk is crafted after the Tripel style of Belgian beers. It’s also another slightly strong one, and as underdogs we have to fight where the fighting’s good!

Yes, it’s the World Series. Yes, it’s still baseball season out there at the end of the October. But it’s going to be damn cold in Ohio this and next week, and I’m sure it’s going to feel quite chilly in the Windy City as well. So let’s just get some heavy roasting action here with a strong caramel taste and creamy mouthfeel. Thirsty Dog isn’t in Cleveland, but it’s in a city that’s birthed a champion in LeBron James: Akron! Plus, LeBron is already putting his support behind this Cleveland Indians club. Additionally, James isn’t the only one who has claimed certain accolades recently. This particular stout has won awards at GABF in the past, a nice handful of them actually. Hopefully we can win another trophy very soon. Hopefully. No jinxing! 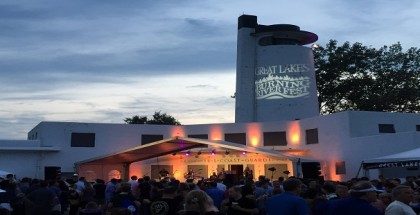