Carole King said it best when she sang, “where you lead, I will follow,” in the intro song for the Gilmore Girls. Since the beginning, the show has created a cult following that’s multi-generational, divisive (are you Team Jess or Team Logan) and very loyal. For seven seasons I followed the Gilmore Girls around the town of Stars Hollow, through the halls of Chilton, attended Friday night dinners, and had coffee at Luke’s. I cheered as Netflix announced the release of a four-episode continuation of the series and then mourned when it was all over (seriously, what’s up with those last four words)? But what I love about the show is that it’s always there waiting for you. Frozen in time, from the span of 2000 – 2007, filled with kooky characters and questionable fashion choices, the Gilmore Girls welcome you to step into their world and enjoy the ride.

So huddle up my fellow Gilmore Girls enthusiasts and let’s pay homage to some of the show’s most memorable characters by pairing them with beer.

Fearless and stubborn, Lorelai is a fast-talking force to be reckoned with. Her biting wit and razor sharp sarcasm would not be as influential if it weren’t for her co-dependency on coffee. She needs those daily jolts. She feeds on them.

Being part of the prominent Gilmore clan, her ancestors came down from the Mayflower, after all, Lorelai needs a boozier brew like Santa Fe’s Imperial Java Stout. This beer is a straight shooter with a nice roastiness and lingering bitterness (similar to Lorelai’s resentment towards her mother). The can says “not for use with donuts” but we all know Lorelai is a renegade. She’ll definitely eat many donuts with this beer.

Try it with: Pop Tarts (or donuts)

A favorite pastime for the Gilmore Girls is eating biscotti, preferably while watching all three The Godfathers. Alas, there could not be a more perfect pairing for Rory than Evil Twin’s Imperial Biscotti Break.

Imperial Biscotti Break is a dark mahogany hue with a bit of almond and cherry in the nose. But don’t let the fruity nose deceive you! There are many layers to this beer such as vanilla, coffee, roasty chocolate and caramel. At a hefty 11.5% ABV, this imperial stout is surprisingly drinkable with a sweetness that is balanced by a restrained bitterness — like Rory’s ability to crack the whip and lead the Yale Daily News staff.

Said to be brewed in the old tradition of imperial stouts provided to Catherine the Great’s imperial court, Old Rasputin is refined. It’ll make you want to go into your study and turn on Mozart’s Prague Symphony. Then you’ll settle into your plush, leather arm chair and read the History of the Peloponnesian War as the beer warms.

Like good old Richard, Old Rasputin is bold, rich and well balanced. Astringent with a drying after taste, this is a serious beer (seriously, it has won a ton of awards). I can’t think of a better beer to pay tribute to the late and great Edward Herrmann.

Try it with: a cuban cigar

Like Emily, La Folie ages very well. Upon first sip, you are startled with the abrupt, punch in the face, mouth puckering sour. This type of sucker punching is similar to being Gilmored — the art of throwing shade that only Emily herself can perfect. Moments after being Gilmored, you’ll realize that she’s just insulted your working class outfit and modest upbringing. Not a moment later she says your house is “charming” but rather small.

But take a few more sips, and it becomes apparent that La Folie is much more inviting than that initial meeting. Following the sharp acidity, green apple, tart cherry and plum-skin will tickle your senses. And then you’ll hang your head in shame because Emily was right all along.

Try it with: roasted lamb during Friday night dinner of course

Luke can get a bit crabby like the crab that’s portrayed on the One Claw Rye Pale Ale can. While he’s often seen fighting with Taylor Doose or blatantly hating on town antics, Luke is actually the most steady character on the show.

At an even tempered 5.5% ABV, this is an easy drinking beer for a reliable guy like Luke. A little biscuity with a touch of honey, one can only envision Luke grabbing a 6-pack to enjoy while fishing or after a long day at the diner.

Try it with: cheeseburger and fries from Luke’s Diner

The label reads: “Pour slowly as to not disturb the sediment, but with enough vigor to create a luxurious head and release the rich bouquet.” There is also a recommendation to serve Hennepin at 45 degrees Fahrenheit. This is the kind of precision and attention to detail that beloved chef Sookie appreciates. Bright and playful, this saison is a bit flighty with flavors of ginger, coriander, orange peel and grains of paradise that dance on your taste buds briefly but then disappear… you know kind of like how Sookie disappeared in A Year in the Life.

Try it with: Sookie’s famous risotto

How can I forget Paris? Nobody forgets Paris. Capable of making classmates transfer to other schools and grown men quiver with fear, Paris is nothing if not unique. Just like brett beers, with Paris you either like her immediately, grow to like her, or run fast the other way.

The nose is all brett and extremely pungent. What’s interesting is that when you drink Hop Savant, you expect the same type of barnyard flavor as you would in the aroma. Instead, the IPA is surprisingly approachable with hints of hops, tropical fruit and malt. As you settle into the beer, you think “well this is quite nice.” And then the lingering funky, horse blanket aftertaste comes back. And that’s Paris telling you she will always be the queen bee. Always.

Try it with: pizza but hold the cheese 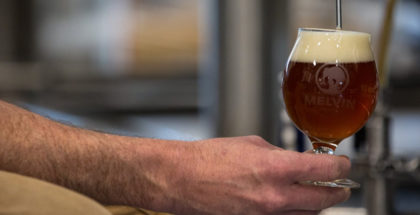