I had never met a nun before. That feels important to establish at the outset.

Though I grew up religious, the spiritual instruction of my youth came mostly from non-denominational preachers with overactive sweat glands and a predilection toward sermons about the end times rather than from black-clad Catholic nuns. So I had no idea what to expect when my wife and I arrived at Monastery Immaculate Conception, home of the Sisters of St. Benedict in Ferdinand, Indiana. I was there to interview Bruce Luecke, the brewmaster at Saint Benedict’s Brew Works, the only brewery in the country housed on the grounds of a women’s religious community. The graceful but imposing dome of the monastery’s century-old chapel rose above us on a hill as we stepped out of our car in front of the Kordes Center, the monastery’s guest lodging facility. The brewery was nowhere in sight as we entered the doors of the retreat center.

We were greeted immediately by a very kind, vivacious older woman who introduced herself as Sister Betty. Wearing dress slacks and a professional-looking top and sweater, Sister Betty did not match my mental image of a nun, which had been formed more or less exclusively from Hollywood movies—though most nuns no longer wear habits, as we were informed during our stay. Sister Betty showed us our room, gave us our keys, joked about the traffic we’d hit on our way, and invited us to Mass the next morning before energetically informing us that we simply had to try the Sister Betty Blonde Ale down at the brewery, a light and simple beer named in her honor.

“I don’t like beer,” she explained. “I told Vince that, and so he made me the easiest beer he could. I love it. When I have friends visit, I make them try it.” She explained she never has much more than a sample herself, but she’s quite proud of her eponymous brew. After further recommending the brewery’s excellent soft pretzels, Sister Betty left us in our room. Melinda and I smiled at each other, grabbed our room keys, and walked down the hill to a small, utilitarian building on the very back of the monastery’s expansive property. It was time to drink some nun beer.

A Newspaperman and a Nun Walk Into a Bar

St. Benedict’s Brew Works opened on October 15, 2015, and has carved out a niche for itself in the year and a half since Vince Luecke and Andy Hedinger leased the building and opened the brewery. Andy also runs nearby Monkey Hollow Winery, and has since sold much of his share in the brewery to Vince, who handles the day-to-day operations. As both brewmaster, owner, and barkeeper, Vince is surprisingly laid back. He greeted us kindly, and sat at the bar to talk as we sampled through his beers. We started, of course, with Sister Betty Blonde, a clean, all-malt ale that is unassumingly delicious. Vince smiled when we told him we’d just met the real Sister Betty. “She’s wonderful,” he said. “I think if I put that beer in bottles, she’d come down here and sign them for me.”

Vince has a good relationship with the sisters of the monastery, though he and Andy did face some concern when they approached the religious community about opening the brewery. Some of the sisters worked with ministries that assist alcoholics in recovery, and they were concerned about the image of having a drinking establishment on their grounds. “We don’t need a honky-tonk at the bottom of the hill,” some of the sisters expressed to Vince. But once he explained what the facility would be like, and how it would be run, they were willing to give it a shot. The entire order had to approve the venture before they could get started.

Vince is a newspaper editor by day, but once studied for the Catholic priesthood. He also spent some time in Europe in pursuit of great beer, and remembers visiting many abbey breweries in Belgium and Germany. “We went to Chimay, Westvleteren, a few others in Belgium. I don’t even remember where we were in Germany,” he laughs. Vince brought the sense of dedication to craft that defines those breweries back with him, and a little over a decade later, opened one of the only monastic breweries in the country.

St. Benedict’s Brew Works might be in its infancy, but the monastery that houses it is much older—the Ferdinand sisters are celebrating the monastery’s 150th anniversary in 2017. The entire region is strongly Catholic, having been settled by a Croatian priest in 1840. St. Meinrad, a men’s Benedictine abbey, is just five miles away. Vince initially approached the brothers there about brewing, and brewed several homebrew batches at their abbey, before ultimately forging a relationship with the Sisters of St. Benedict.

St. Benedict, a fifth century monk, established a way of living characterized by simplicity, hard work, community, and charity. Nuns and monks who take vows within the Benedictine order pledge to live by these principles, and while St. Benedict’s Brew Works is an independent business and Vince is not a monk, he seeks to honor the order by exemplifying those same qualities at the brewery. His beers are simple but tasty. They aren’t flashy, but they have no errors or off-flavors either, and their classic refinement is refreshing in a craft beer landscape often marked by inconsistency. They’re honest, working-class brews for a hardworking community. There’s a strong German influence in the area, and the German businessmen who often frequent the taproom have assured Vince his Sister Mary Kolsch is a spot-on representation of the style. Crisp, with the light fruit notes that characterize the style, the Kolsch is one of the most popular beers on the brewery’s four rotating taps. When I asked who Sister Mary was, Vince chuckled. “As you can imagine,” he told me, “there are quite a few Sister Marys.”

As we continued to drink through the beers Vince makes in the brewery’s 1 barrel brewhouse (a 3 barrel system is coming online currently), including the Centennial-hopped Afterlife IPA and the beautifully restrained Sanctimonious Stout, an American stout with notes of light-roast coffee and chocolate, he related some amusing stories from the regulars. One older gentleman is fond of a tale about a local boy in the 1950s (sources are out on whether or not the storyteller is the young man in question) who used to carry a pail of homebrewed beer up to the monastery, sneaking it around the back to avoid public eyes, and exchange it with the baker for some of the sisters’ delicious coffeecake. Whether or not the story is true, it shows the sense of community and history that holds the town together and the long-standing bond between the monastery and the townsfolk. Nuns and factory workers alike enjoy the brewery’s presence, and it provides another way for the sisters to interact with the town in which they work and minister. Additionally, some of the proceeds from the brewery help support the sisters.

While Vince has fun with the names of the beers (Witty Nun Witbier and Raising Lazarus IPA were on deck when we visited) and some of the design elements of the brewery (a cross hangs over the bar as if it were the front of a church, tap handles are black silhouettes of habited nuns, and the brewery’s t-shirts proclaim “Ale Mary!”), it all comes from a place of affection and mutual respect. Vince is proud to operate a brewery at a monastery, and would love to see more open. He is hoping to organize a small festival in September that will bring together the few other abbey breweries in the country, including Spencer Brewery in Massachusetts, the only Trappist certified brewery in the United States. He isn’t sure what form that will take, but he’s hoping to create something that can demonstrate what makes these breweries unique. He also leads weekend brewing retreats several times a year in which attendees learn how to brew, are taught Bible parables that relate to ingredients used in beer, and then stay overnight at the retreat center and attend Mass with the sisters. The brewery’s motto of “Pray, Work, Brew” is clearly more than just a catchy slogan.

Before we bid goodbye to Vince, he let us sample his newest beer, the William Tell Alt. Alt is no easy style to master, but this beer was a delight, unfolding layers of cold-brewed light coffee, nuts, toast, peanut shells, and even mild chocolate, but staying very light and bright on the tongue. Vince shrugged when I praised his beer, and smiled. He may not be a monk, but his humility and talent would make them proud.

My wife and I walked around the gorgeous monastery after we left the brewery, taking pictures of the beautiful chapel and well-manicured grounds. The place felt timeless, though the main chapel was built in the 1920s. The evening sun faded on that cool, early May evening, and as the golden light hit the high windows and brick walls, we had a sense of why someone might choose a life of such seclusion and peace.

The next morning, we rose early and walked back to the chapel to listen in on the sisters’ chanted morning prayers, the haunting but beautiful tones rising to the stained glass windows and arched ceiling high above. We stayed for Mass, then joined the sisters for breakfast. We sat with Sister Betty, who is celebrating her jubilee this year (her 50th year as a nun), and Sister Corda, who has been a nun for a decade longer. Sister Betty asked us about the beer that bears her name, and we assured her it was as good as she had promised. She smiled. We chatted about these sisters’ lives as nuns, the history of the town and the monastery, and even St. Hildegard, the 12th century German abbess who, in the midst of her pioneering work in the natural sciences, was the first person to document the preservative properties of hops and dictate their use in the beers made at her abbey in Bingen. After breakfast, Sister Betty and Sister Corda hugged us both warmly and sent us on our way. We lingered for a bit, taking pictures and soaking in the beautiful place, unwilling to leave.

As we exited the building into the morning sunshine, I noticed Vince’s truck behind the brewery at the bottom of the hill, and another vehicle beside it. Just before we had left the night before, I’d heard Vince tell a local customer he had plans to brew on this Saturday morning. “I was hoping to brew today, but Russ had a family thing come up. I might come in in the morning. We’ll see.” That kind of laid back attitude might scare another brewer, but it fits perfectly in this place that accepts so readily that what will happen is meant to happen. One way or another, the beer will get brewed, and the locals will drink it, both proud and grateful for these suds brewed right in their home town. When it comes to St. Benedict’s slogan of Pray Work Brew, well, they’ve been doing the first two here for a long time. They’ve found brewing fits in just fine.

Bike the World with Fat Tire: Lend a Hand and Win a Trip to Patagonia 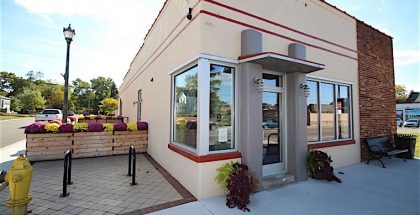 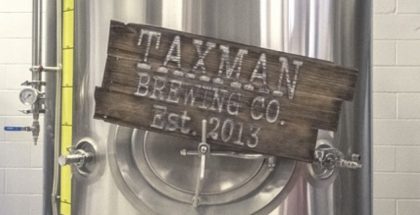