I still remember the first time I met up with Dustin & Marcia Hall to enjoy a beer. I had only seen Dustin’s work on Instagram via his Brewtography Project account, but even through the illuminated lens of a iPhone 4 screen, I could see Dustin’s passion and eye for the craft.

Over the past four years, Dustin Hall has brought life to the Colorado craft beer industry by documenting over 150 breweries and countless more beer festivals and events. Dustin typically spends between four to eight hours a session when shooting a single brewery, so as to best capture the essence of that brewery’s day to day operations. His photography is deeply personal, detailed and often uncovers perspectives that normal brewery goers rarely get to see. Dustin is not like any other photographer, or beer fan, he is one of the few true photojournalists of the beer industry.

Additionally, Dustin’s primary objective has always been to give back to the breweries, by allowing each of his subjects full access to use his images for marketing materials, social posts, promotional assets and prints that can be seen on premise without charging them a dime. It’s this sense of humility, this dedication to his craft, this willingness to give back, that echoes the true nature of the industry he covers.

We’ve been fortunate enough to showcase Dustin’s photography on PorchDrinking since that initial meeting. And I knew then that he shared our drive to promote the craft beer in a positive manner, through great imagery and storytelling. Last year, Dustin’s project The Brewtography Project: Discovering Colorado Breweries, a coffee table book celebrating Colorado brewery culture; exploring the passion and personality of local breweries through his photographs, was fully funded through a Kickstarter.

Tomorrow night Dustin previews some of the iconic images that will be featured in the book with a gallery opening at the Hotel Teatro. Dustin’s gallery will be on display until December 1st, however tomorrow night’s event will also feature a special collaboration beer made in partnership with Rocky Mountain Barrel Company and Call to Arms Brewing. The beer entitled ‘Beautiful Impression’ is an Oak-Fermented Brett Farmhouse Ale with notes of guava, pineapple, and orange zest – with a balance of soft vanilla from the oak. 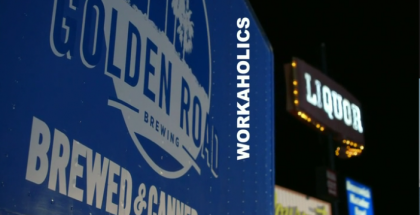