Burning Barrel Brewing is the vision of a father/son duo; Jack and Duncan Alexander. Jack, a longtime homebrewer, and Duncan are leading the way on the build-out of the brewery located within the Barrel District of Rancho Cordova, a city just east of downtown Sacramento. Rancho Cordova has embraced the “Maker Spirit” by creating its Barrel District, streamlining the process of opening a brewery — and more. The Barrel District currently includes six breweries, two distilleries, and one meadery.

The Burning Barrel name invokes the idea of wood-aged beer, but according to Duncan, the name is more about the brand. Duncan wanted a name that is aggressive but not strictly tied to beer. So, does that mean they are also planning to open a distillery? Yes, but not in the immediate future; it’s a goal they will be working towards down the road.

In addition to Jack and Duncan’s vision for the brewery, the two planned extensively and produced quality beer, which bodes well for Burning Barrel. Rather than settle for the prototypical business-park brewery, tucked in an out-of-sight corner with limited signage and parking, Jack and Duncan desired a place that would stand out. After spending more than two years planning and reviewing numerous, potential locations, they discovered a building that will likely get them noticed. Sitting less than one mile off the US 50 freeway, the 4,860-square-foot, 150-seat brewery and tasting room also offers its patrons ample parking and nearby food options.

Unlike many new breweries, the two have spent considerable time and money building a tasting room that is both functional and comfortable, while also visually standing out above the crowd. Jack took the lead, making all the tables and bar tops from a single tree the had died from a beetle infestation, and the back wall of the bar is all made from reclaimed fencing. Jack also did all the metal work for the tasting room. The tasting room is wide open with communal tables and a large bar top, and guests get a full view of the brewery (they intend on brewing during business hours to add to the beer tasting experience). The entire space is air-conditioned, which should make this a great spot during the heat of the Sacramento summers.

Putting on the Finishing Touches

They will be open to the public on July 19 and will host its Grand Opening on July 28. A few of the beers on tap when they open include; Golden Dreams Blond Stout, Loral Waves Blond Ale and Noice Aus, an Australian-hopped Hazy IPA that was brewed in collaboration with Hop Dogma.

Jason Williams, who was previously with New Glory Brewing, is the head brewer for Burning Barrel. Jason’s plans to brew a wide variety of styles, including everything from the traditional to the innovative. Expect to see both hazy and West Coast IPAs, as well as kettle sours and stouts. Duncan explained that they intend on having a continuously changing tap list rather than have an emphasis on a strict core beer lineup. They will be filling their first 24 bourbon barrels, which will be used as part of the brewery’s First Anniversary beer — with more to come soon. Crowlers will be offered, and well as periodic can releases. 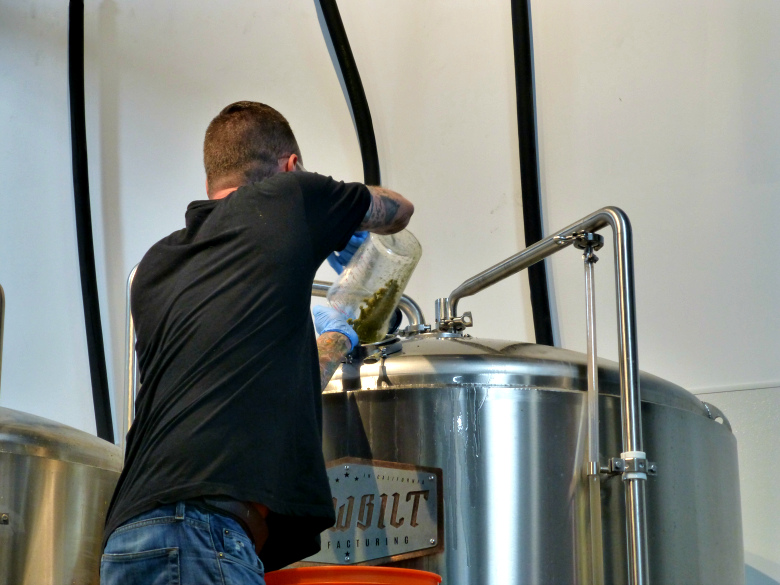 As new breweries go, Burning Barrel is set on raising the bar. After touring their brewery and talking to the team, I have no doubt these guys are up for the challenge.