During my time in Salzburg, I learned the special relationship the city has with the Untersberg. It provides all of the drinking water for the city; it also provides all of the water used to produce beers like their iconic Stiegl-Brauwelt Goldenbrau. All of the beer made in Salzburg is sourced from Austrian ingredients, hops from the north, water from the Alps, yeast from local sources. The city of Salzburg is built around a storied fortress that housed the Prince-Archbishop of Salzburg during times of distress and war. And yet, Salzburg and the beer its local brewers create are inherently inviting, brewed to be consumed by the everyday citizen, tourist and royal alike.

My day in Salzburg lasted about 12 hours, with each minute well spent exploring its amazing architecture, cobbled passageways, and sinewy side streets. There’s a lot to experience as a first-timer, which makes it no surprise that the city’s primary export is tourism. While many take the voyage to this scenic city to explore the sights and sounds associated with the classic film The Sound of Music, I had an early morning reservation with Martina, dubbed the Salzburg bierguide, who illuminated the unique beer history of the city. Side note—if you go to Salzburg, I recommend you schedule a tour with her given her knowledge, friendliness, and the fact that she speaks numerous languages—perfect for tourists coming from various parts of the world.

During our morning walk, Martina illustrated why Salzburg is considered the beer capital of Austria. With more than 600 years of brewing tradition, the history of brewing is present in a myriad of ways, not only in the beer and brauhaus symbolage that peeks out around every corner, but in the architecture as well. One of the most memorable stops left us looking at the “Beer Bell,” which would ring every evening at 8:00 p.m. to signal a curfew for the city. While it is no longer in commission, it served as an interesting reminder of how ingrained the art of beer is within the city.

Martina also brought me to St. Peter’s Abbey, a piece of history that has been around since around 800 AD. During this stop, she highlighted just how big the role of Christianity played in the history of Salzburg’s brewing tradition. The first two commercial breweries, including Stiegl, were created near the end of the 14th century. Soon after, the Prince-Archbishop, who’s large palace is stationed nearby the Abbey, declared a series of strict regulations and taxes on beer brewing in the city via “court brewing.” Although the strict court regulations basically gave him a monopoly on the beer brewing process for many years until the laws were repealed, the beer scene in Salzburg continued to grow locally and is now a vibrant part of this city’s unique culture.

The Brewery By the Stairs

Today, Salzburg has 11 brewers in and around the city: six major brewers and five smaller brewing inns. Austria’s biggest privately-owned brewery is Stiegl-Brauwelt, dubbed the brewery by the stairs. Why? While the first mention of Stiegl came in a brewer’s purchasing document in 1492, there was a unique mention 30 years afterwards that called out a “brewery by the staircase.” Stiegl, which is German slang for stairs, became an obvious choice for a brewery that is now over 525 years old. The iconic stair branding now stands out on all of its packaging.

Speaking of its packaging, my first experience with Stiegl was seeing a brightly orange-and-white-branded can of Stiegl grapefruit radler in a supermarket back in Chicago. I feel like every summer I’d see a bevy of these 16-oz cans at any summer outing. Was this a shrewd marketing strategy to appeal to Americans love of lighter beers? Apparently it was the opposite. Luke, the guide who walked me around the brewery, noted that he was “not sure” how their grapefruit radler became so pervasive in North America. He looked a little perplexed himself.

And while the brewery isn’t sure how their radler became big in North America, they are sure that two-thirds of the radler they produce goes to the US and Canada. It is also available in cans, which Stiegl, and most Austrian breweries for that matter, don’t do often. Of the 1 million hecto liters of beer Stiegl produces per year, only 10% of that is devoted to cans. Why? Through my conversations with Luke and others in the industry, it became clear that the Austrian beer drinker looks down on canned beer. Instead of seeing the benefits of cans—stability, longevity on-shelves, etc., many Austrians dub the canned stuff as cheap so they shy away. Stiegl goes as far as to outsource the canning of their beer to an entirely different facility so they can focus on bottles and house brews.

Of the beer they do produce in bottles, the biggest cash-cow, dubbed “Salzburg’s liquid-gold,” is Stiegl-Goldbräu, a deliciously refreshing Helles beer. Luke says that 75% of their total production goes towards producing Goldbrau. It’s a Salzburg-staple that is pervasive across taplists and beer aisles alike because it’s a damn good beer.

With the success of Goldbrau and Grapefruit Radler, Stiegl has a good deal of room to experiment in other areas, whether that be wood-aging beers, pale ales, or one of the other 30+ beers they produce. Alongside a serving of their Goldbrau, I got to taste their house-brew of the moment, a gin-barrel aged IPA which came in with a lofty alcohol profile (7+%) and huge hits of pine. My favorite beer of the day, though, was their Columbus 1492 Pale Ale, a deliciously floral and hop-filled session pale ale that helped fuel my sunny session in their spacious biergarten.

Teaching Moments at the Biergarten

While Stiegl boasts the biggest brewery in Austria, the biggest biergarten in the country belongs to Augustiner Brau’s Salzburg outpost. Amidst a canopy of trees, wooden benches, and jovial crowds, beer drinkers indulged in the Augustiner Marzen served in 1-liter mugs. It’s tradition to “wash” your mug in the fountain before getting your customary fill. Through my trip, it became clear how important tradition is to the beer scene here. People are invested in the beer they drink and committed to the brewery that makes it. Some particularly curious folks take things a step further and pursue a higher level of Cicerone accreditation at places like Kiesbye Bierkulturhaus, which is a beer academy and self-dubbed “nature brewery” steps away from the historic Trumer brewery location on the outskirts of Salzburg.

Speaking of beer gardens, Augustiner Brau has the biggest one in Austria. Perfect way to end a perfect day in #salzburg. pic.twitter.com/JBzR6ud8ts

During my first liter of Marzen, I had the chance to speak with Oliver Klamminger, who teaches brewing and beer education classes at Kiesbye. Oliver says that the academy was started 15 years by Axel Kiesbye, who had a passion for beer and for expanding the influence of the Austrian beer scene onto a new generation of beer drinkers. The academy does this through many ways, including their two week specialized Cicerone preparation course, which offers individuals a set curriculum of beer courses and teachings that teach things like beer history, styles, pairing strategy, brewing process, and more. The Monday-Friday curriculum is high-intensity and is designed to prepare folks to achieve their Cicerone accreditation.

But the impact of Kiesbye reaches farther than standard beer education. It also delves into beer innovation, which includes creating unique, one-of-a-kind beers with natural ingredients Axel finds during his nature hikes. Once a year, the Kiesbye team brew a special beer at Trumer and self-distributes it out to the market afterwards. These “Waldbiers” have been brewed for eight years now and include crazy ingredients like pear skin or flower petals. Oliver says that the 2019 version is dubbed Elsbeere, made with elderberry found by Axel on hikes along with the yeast found on top of the actual berries.

Oliver was nice enough to give me a few bottles of their older variants for my train ride back to my home base in Vienna. Just like in the morning, the cottages and mountains whirred by as the train started its smooth journey home. Unlike the morning leg of the trip, I came equipped with a beer in-hand along with a greater understanding of Salzburg’s immense history and storied beer scene. Being two hours from Munich, the influence of German brewing culture is present, but I came away equally impressed with just how inventive the beers from Stiegl and Kiesbye can be. There’s room for growth and there’s space to appreciate the past. I can’t wait till I’m on this train back to Salzburg again. Cheers! 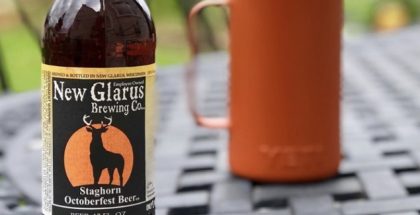 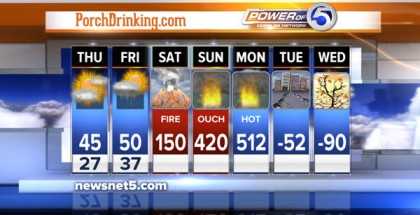 A Look at the Young but Ambitious Craft Beer Scene in Vienna... June 6, 2019 | Taylor Laabs 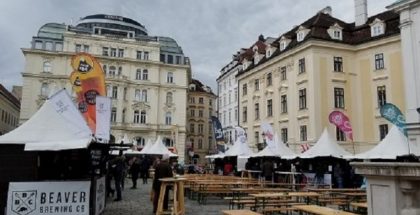