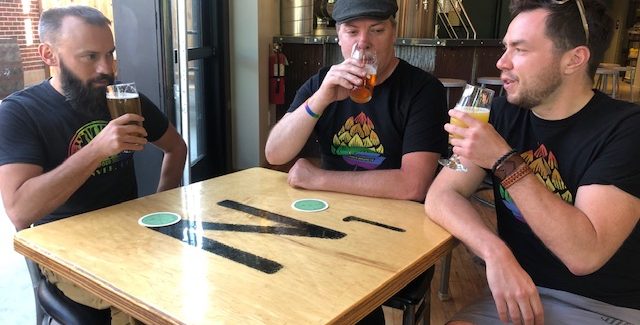 “A lot of folks who identify as queer aren’t comfortable with the bar scenes,” said Michael Pare, co-founder and organizer of the Denver Beer Queers, a group of people in the LGBTQ community and their straight allies who get together at breweries. “They want a more low-key, more social, friendly environment.”

Pare, an IT operations and senior system administrator, excitedly walked into Long Table Brewhouse in Denver’s Park Hill neighborhood on a Wednesday evening in June to show off the new sign featuring the DBQ’s new logo.

Pare had the sign printed for the Brewer’s Light Pride Parade—a craft brewery-organized parade that was held in response to being shut out of Denver Pride, which is exclusively sponsored by Coors—but the sign will hang proudly at each of the upcoming meetings, which are held up to three times a month at a rotating list of breweries in Denver and its metro area.

A Maryland native, Pare founded the Denver Beer Queers in July 2016 with a friend after participating in other craft beer-centered meet-up groups. He felt he could implement a similar premise within the LGBTQ community.

“There are people in the queer community that appreciate craft beer,” Pare said. “We wanted to form a comfortable environment for people to come in and have a beer and make a new group of friends.”

The meet-ups, which average between a dozen and 20 people, attract a range of the rainbow. The 20-something lesbian who just moved to Denver. The gay couple in their 60s who reflect on the importance of gay bars when they were growing up in Little Rock, Arkansas. First-timers, long-timers, men and women and non-conforming members who may or may not be back.

But for a couple of hours, a few times a month, they’re the Denver Beer Queers, loud and proud, at a brewery table near you.

“I live in Denver, I like beer and I’m queer,” said Stephen Adams, a satellite engineer and craft beer blogger known as the Colorado Beer Geek. “I thought, ‘Sounds like a good time.’”

Adams joined the group only months after its inception. He found it after searching meet-up groups. Recently, Pare and Adams asked Kurt M. Kopec, a Denver native and a DBQ member since late 2016, to join them as a lead organizer. The trio is trying to raise awareness of just how much the LGBTQ community drinks craft beer. Adams thinks breweries are listening.

“I did a listing of all the Pride events this year. It was about half the size last year,” said Adams, who monitors brewery openings, closings, and events as the Colorado Beer Geek. “They’re not just saying, ‘Okay, pay us for this beer.’ They’ve been really supportive.”

Plenty of Room for Growth

Statistics of LGBTQ people who work in the craft beer industry aren’t readily available. But that doesn’t mean the Brewers Association, the not-for-profit trade group for craft brewers that records data, isn’t making moves to increase visibility of underrepresented demographics in the industry.

Last year, the BA hired Dr. J. Nikol Jackson-Beckman, a black, gay professor from Virginia, as its diversity ambassador. Despite how hard she works—including giving frequent conference lectures and tweeting lots of wisdom—the BA still does not offer hard data or statistics on the state of LGBTQ representation in the craft beer industry. In a tweet, Beckham joked that brewers want these and other demographic numbers but don’t take the time to answer surveys to provide them.

Betsy Lay, co-founder and the “queer ownership” of Lady Justice Brewing in Denver, said that although the local scene is visibly supportive of the LGBTQ community, she thinks that the national industry as a whole has a lot of growing left to do.

“I don’t see a lot of it. I don’t think I see a large organization trying to figure out,” Lay said. “I couldn’t say off the top of my head that the BA is focusing on LGBT issues. I think it happens on a local level, but maybe not on an organized, national level.”

Lady Justice Brewing, a non-profit brewery that donates its profit above cost to Colorado organizations that benefit women and children, proudly touts that it’s queer- and woman-owned. Lay said it’s important for “Lady J,” as the brewery is casually called, to advertise what it genuinely is and who it represents.

“We want to be authentic in who we are as people, as brewers, as small business owners,” Lay said.

And just like Lady J sold a glitter Gose as its Pride beer, multiple breweries across Colorado packaged, distributed, and advertised an LGBTQ-themed beer, including Boulder Beer Co.’s Gender Fluid Lager and Burns Family Artisan Ales’ Non-Binary beer. Lay said that’s fine for breweries to do—if only they talk the talk and walk the walk.

“I think if it’s going to raise money for communities, I think it’s great,” Lay said. “I just want to know about the authenticity of these producers. What are their intentions? Is it to cash in on Pride month? To bring awareness to issues in the community or help make people feel more supported? If breweries are doing that, and it’s making queer communities feel like they have a place to go, then it’s wonderful.”

Both Boulder Beer Co. and Burns Family Artisan Ales, as well as Station 26 Brewing, Denver Beer Co., and several others, donated part of the proceeds from their Pride beer sales to LGBTQ organizations.

But despite the local support, Lay thinks a lot more can be done to increase LGBTQ employment numbers in the industry.

“I would love to see breweries pay attention when they’re producing beers and naming beers,” she said. “To recognize the craft beer drinkers hold a wide variety of identities. Understanding not just one type of person drinks beer and knowing more about the communities you serve.”

Even though they’re not technically in the industry, the trio of DBQ organizers is actively and heavily involved with craft beer. And for their part, they find the local scene not just accepting, but welcoming and inviting.

“While there might not be a big number [of LGBTQ employees],” Adams said, “it’s not because the industry is exclusive. It’s because people haven’t gotten into it.”

Pare agreed. Although the representation in the industry is largely straight and cisgendered, he said craft beer has a lot in common with the LGBTQ community.

It’s not “if” the craft beer community gets gayer, it’s “when.” But until that happens, and after, DBQ will continue to meet and grow. Plans include taking weekend trips to breweries in the mountains or to cities across the Front Range. Maybe another collaboration beer with a brewery. And their semi-annual bottle share is in July. Pride month will be over then, but the DBQ’s mission never ends.

“We want to encourage people to get out of their comfort zone, but we want them to be comfortable,” Kopec said. “We want people to be proud to be out here.”