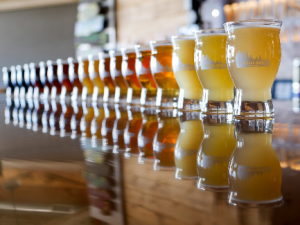 Woods Boss’s vast range of expertly-crafted beer is a key part of their identity, explained Chad Moore, co-owner and head of business operations, because Woods Boss is dedicated to providing all members of the community a “third space.” As he discussed, people generally have two spaces: a work space and a home space. Creating a come-as-you-are environment that allows for individuals to truly interact and appreciate one another is the primary goal of Woods Boss. Gathering with others and enjoying beers builds a community that perpetuates positivity and connection, which are some of the traits of a true Woods Boss.

Before Woods Boss was a brewery, Fink spent some time as a true “woods boss,” leading groups of students on expeditions. As a leader in the wilderness, he followed tenants that are now posted on the Woods Boss website and in the brewery. Moore and the rest of the Woods Boss team adopted these guiding principals which focus on integrity, work ethic, being environmentally conscientious and giving back. They are so integral to the brewery that they hang on the entryway to the brewery, serving as a constant reminder of the type of space Woods Boss strives to be.

Because Woods Boss offers a variety of well crafted, fresh beers, each visit promises to offer both familiar and experimental beers. Oswald, Woods Boss’s early standout, is a New England IPA showcasing a great balance of floral and bitter flavors. Full mouthfeel and a crisp finish make this a lovely and approachable offering that’s true to style and is available most of the time. A past beer worth discussing is Peripatetic, a Belgian Dark Strong Ale which is aged in wine barrels and on plums. Showcasing a malty, roasty character in the mouth a hint of sweetness from the barrels and fruit on the nose, Peripatetic exhibits a complexity that appeals to the most advanced beer fanatics. A few sips reveal a hint of sour, but one that pairs well with the dark characters mentioned before. This beer had great flavor and a high ABV to boot at 9.4%.

The atmosphere is fittingly woodsy with hardwood paneling on the walls (not that 1970s stuff!), cozy couches and a patio for enjoying the mountain views along California Street. It’s in this atmospheric space that Woods Boss is working to build a community one non-profit, Hawaiian Shirt Day, open-mic night and hand-crafted beer at a time.