From Bean to Beer | The New World of Chocolate Beers

Chocolate beer is nothing new. Brewers have been throwing cacao nibs into stouts for years now. But with a growing recognition among brewers of the flavor potential of fine cacao in various forms, the possibilities for how chocolate can be used in brewing are expanding rapidly. And that’s exciting.

I started a podcast in 2020 called Bean to Barstool, which uses craft beer and bean to bar chocolate as dual lenses for exploring the world of flavor. I wrote in the initial media announcement for the show that people should “think of it as a dream journal written in the complex alphabet of beer and the eloquent vocabulary of chocolate.”

A bit fussy? Sure. But our senses are made of magic (or at least really cool science, which is basically the same thing), and talking about how our senses respond to beer and chocolate can make me wax a bit poetic. Forgive me.

The majority of the world’s commodity cacao is sourced from farms in Ivory Coast or Ghana in west Africa, and unfortunately labor abuses are rampant throughout the supply chain. Some estimates hold that around 70% of the world’s chocolate was grown, harvested, or processed with child slave labor and other human rights violations. The big chocolate makers have repeatedly promised to eliminated these abuses and have repeatedly failed to do so.

Additionally, the big chocolate companies want a repeatable product that will always taste the same, which means commodity cacao is blended into a homogenous chocolate product that is then turned into candy. This erases the remarkable nuances brought about by varietal, terroir, and seasonal variation within cacao.

Bean to bar chocolate makers trace their cacao sourcing directly back to specific farms, paying a fair price to the farmers and verifying no labor abuses were involved in its production. They then process the cacao bean directly into chocolate themselves, controlling the entire production process. Using specific origins, they are able to highlight the nuances of each crop of cacao, showcasing the profound complexity of fine cacao. From a flavor standpoint, you can compare this to the difference between single origin coffee from your local roaster and canister coffee from the supermarket.

There is a world of flavor possible with fine cacao, and that’s good news for brewers and beer fans. So how does it get used in brewing?

The most common method of adding cacao to beer is in the form of nibs, which are the crushed pieces of cacao beans. After the beans have fermented and bean dried, they will usually be roasted. This process is nearly identical to the roasting of coffee beans or dark malts, which is why it’s common to find coffee or chocolate flavors in Porter and Stout styles that use those malts. That roasty harmony makes cacao nibs a natural addition to these dark styles.

At Rabid Brewing in the south suburbs of Chicago, Tobias Cichon decided to purchase nibs from Ethereal Confections, a bean to bar maker on the northwest side of Chicagoland. The first time he smelled their Dominican cacao, he knew he needed to use it in Dwarves of Doom, an Imperial Stout that also uses Smugglers Coffee. 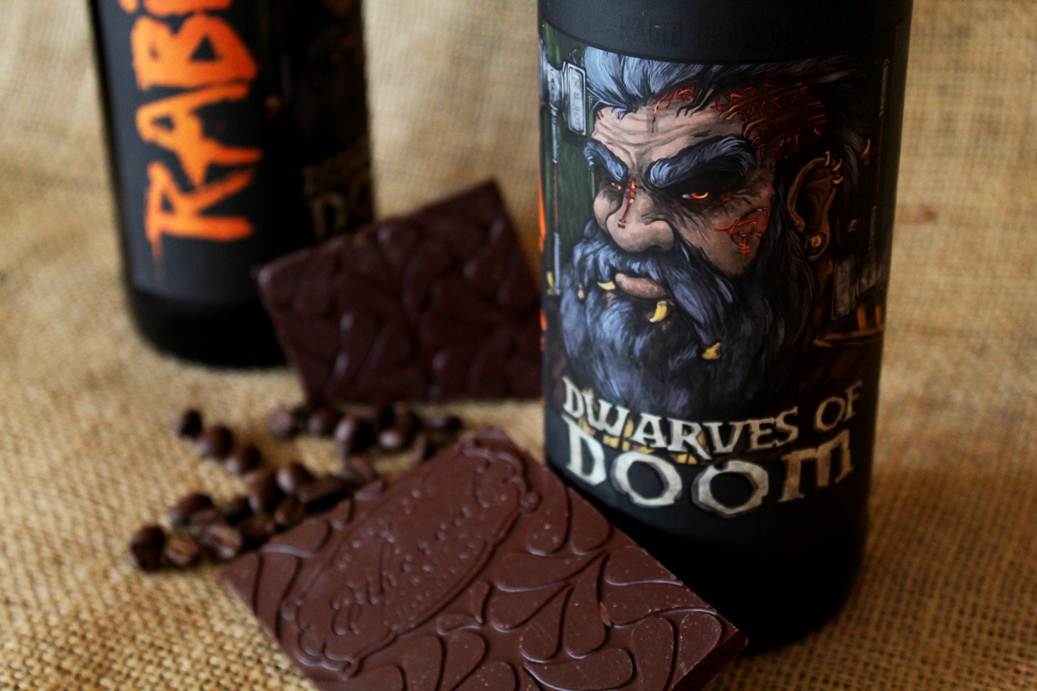 “The richness of the aroma exploded out of the sample package in a way that we weren’t even experiencing with thirty pound sacks of nibs from other providers,” he says. “In a market where aroma is king, chocolate is a deity.”

Rabid themes its beer names and labels around fantasy and mythology, and Cichon employs the same language when describing the nibs he used in this beer.

“The Dominican cacao was just so intensely pretty, like draping a warm, soft blanket made by high elves over your brain. I was looking for luxury and the Dominican brought it in spades,” he recalls. “With Dwarves of Doom, that luxury gives the chocolate nose a more penetrative ability hitting you deep back between the eyes, rather than a flatter chocolate scent.”

At Branch & Bone Artisan Ales in Dayton, Ohio, a serendipitous collaboration brew exposed founder Brett Smith to the wonder of good cacao. While brewing a beer with his friends at Transient Artisan Ales, he was handed chocolate bars from Violet Sky Chocolate, a bean to bar maker in Indiana. The flavors were unlike anything he’d tasted before. 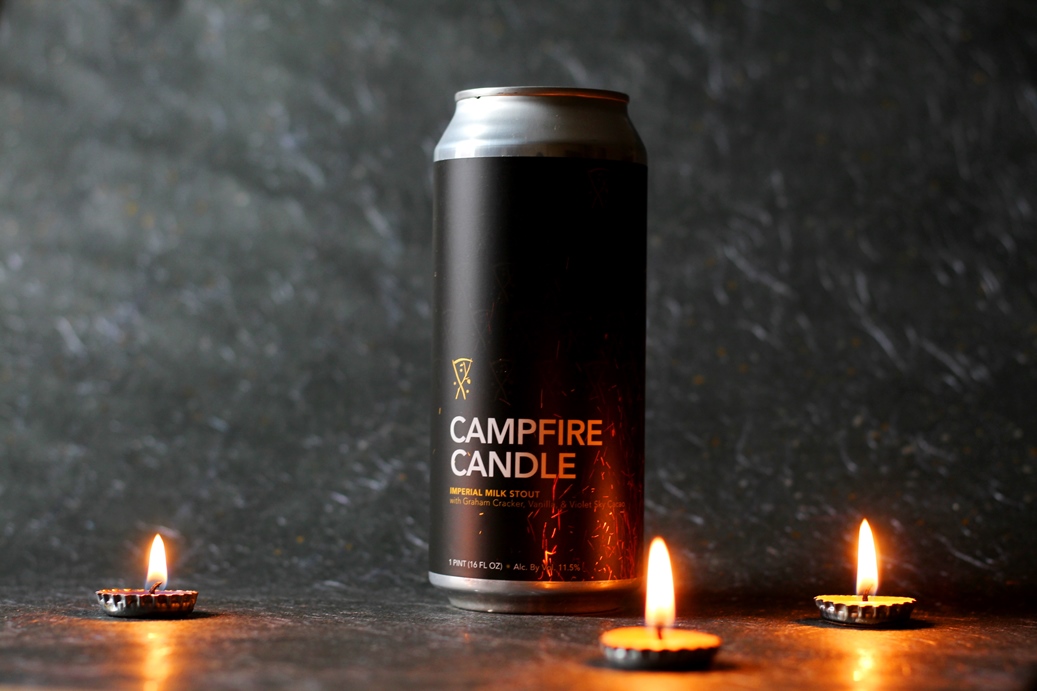 “It was mind-blowing,” says Smith. “Chocolate wasn’t something I’d explored a lot as an ingredient in beer, but when I tasted those, it was like, oh yeah, we’ve got to get some of this.” 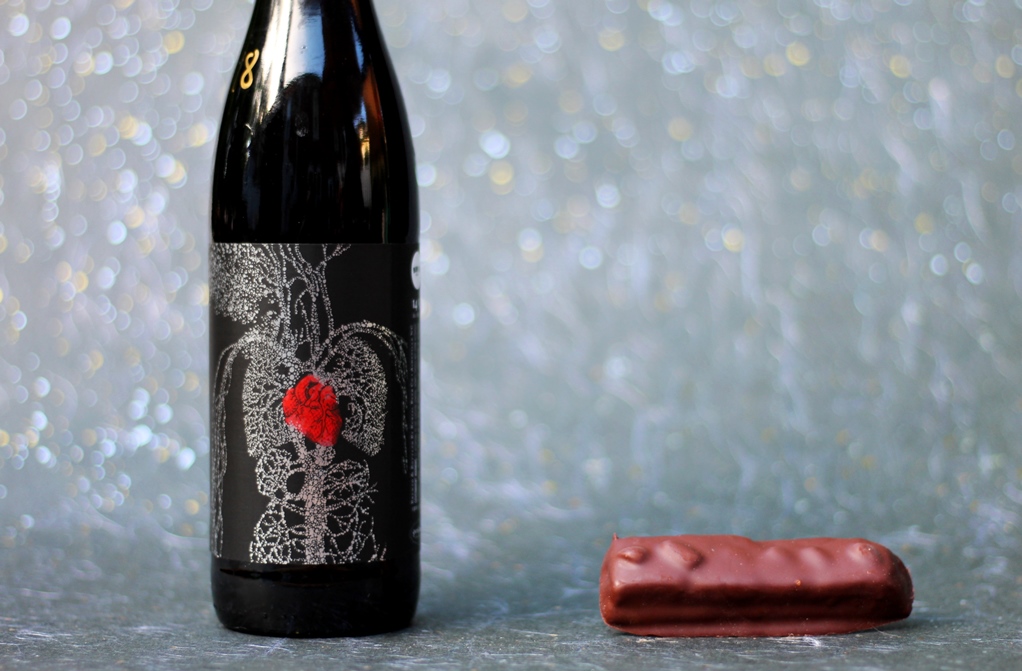 Burial’s I Was Particles Among the Sky and My Existence Became Nevermore, released in 2020, was an Imperial Milk Stout made with roasted peanuts, caramel, vanilla bean, lactose, and Nicaraguan cacao from French Broad. The beer is an indulgent dessert all its own, a liquid night sky filled with roiling layers of darkness, and in the center of those enveloping shadows is the warm beating heart of chocolate.

Working with cacao nibs can be messy and tedious. Their flavor is unmatched, but scraping cacao sludge out of a tank a few times can lead a brewer to look for a simpler option. And that’s where Cholaca comes in.

Ira Leibtag founded Cholaca in Boulder, Colorado, in 2012, after realizing there was no liquid pure cacao product available in the U.S. Leibtag originally conceived Cholaca—which is just 100% cacao and water—as a drink, but quickly realized there was a market for it as a brewing ingredient. Since then hundreds of breweries have opted to use Cholaca in place of messier nibs.

Brazos Valley Brewing in Texas started using Cholaca about three years ago, and owner Josh Bass hasn’t looked back after making the switch.

“We originally were using cocoa nibs, and the process of getting good extract and flavor was cumbersome,” says Bass. “It’s so much easier to get Cholaca injected into the brite tank and recirculated, and it’s easier to clean up after.” 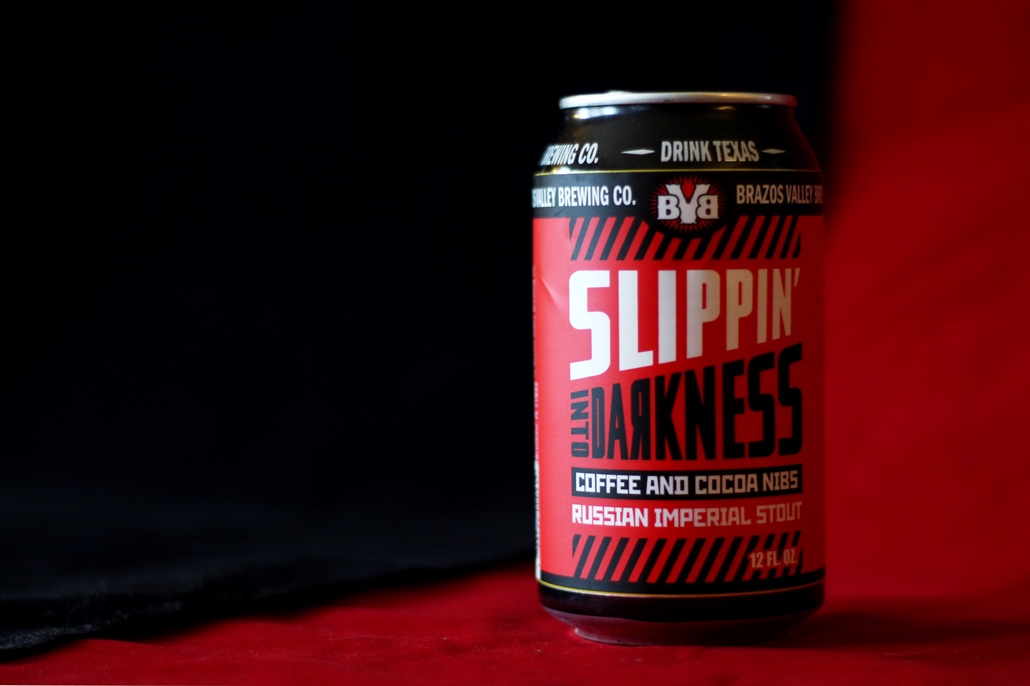 While Cholaca is easier to use and provides a good general dark chocolate flavor, depending on the beer style it doesn’t always offer the nuances available using nibs. Some breweries, like Orpheus Brewing in Atlanta, Georgia, use a combination of both depending on the beer.

“We find with some beers [using nibs] are hard to scale up to full production,” says founder Jason Pellett. “It ends up being a huge mess. The nibs are better, but dealing with all that sludge is a mess.”

Pellett thinks he might opt to use Cholaca when he’s looking for a straight-ahead chocolate flavor in packaged beers, and nibs or a combination for his smaller batch beers.

Food of the Gods

The scientific name for the tree that gives us chocolate is Theobroma Cacao. The genus name comes from Greek words that together mean “food of the gods.” Long before chocolate candy bars became childhood staples, the fruit of the cacao tree was revered by Mesoamerican cultures as a divine source of delight and inspiration.

The fruit of the cacao tree can offer us more than just chocolate from its beans. Cacao pods that contain those seeds are large fruits, and everything inside the pod is edible, including the pulp surrounding the seeds. Cacao fruit has a very bright, tart flavor similar to passionfruit or lychee. Orpheus Brewing recently used cacao fruit pulp in Artifice of Eternity, a Méthode Traditionelle sour ale. 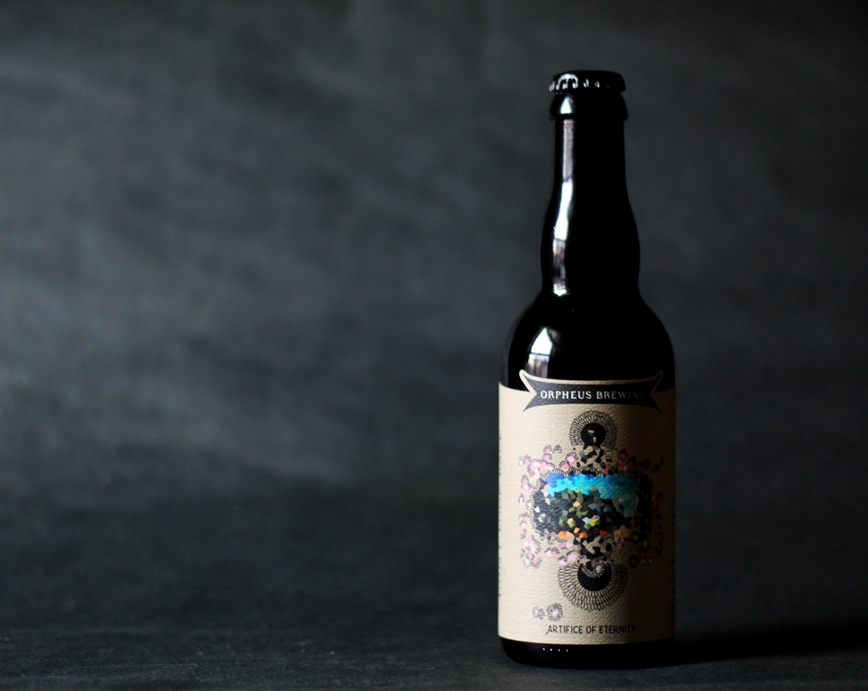 The Orpheus staff spent days splitting open cacao pods sourced from Miami Fruit and scooping out the pulp and seeds. The sour ale was then conditioned on that wet pulp and seeds, and took on a dazzling tropical profile of lychee, passionfruit, tart grape must, and melon from the cacao. It’s tropical sunshine in a glass.

The husks of cacao seeds are usually discarded, but they carry a cocoa-like flavor as well, and an astringency that can amplify the mouthfeel in some beers. This is showcased beautifully in New Belgium Exquisite Extraction, a dark sour ale aged on coffee from Black & White Roasters and cacao nibs and husks from Videri Chocolate, both of Raleigh, North Carolina.

There is so much more to chocolate than just mass-produced candy, and there is more behind the scenes than oompa-loompas in a magical factory. Cacao is full of incredible sensory possibilities, but those experiences must be protected from the terrible human cost of labor abuses in the cacao supply chain.

The next time you enjoy a chocolate beer, ask the brewery where they got their cacao. Express that you’re interested in the origin of this ingredient, both for flavor and ethics.
It’s important that brewers think about this, and it’s important that you let brewers know you care.

If you want to learn more about the possibilities between these two exciting flavor worlds, check out my Bean to Barstool podcast, which comes out on the first and third Tuesday of every month on all the major podcast platforms and on beantobarstool.com.

Beer and chocolate belong together. If you’ll excuse me, I think I’ll go have some now.

A post shared by Bean to Barstool Podcast (@beantobarstool)