Start your Sunday off right! Cow Tipper is on draft and available in 4-packs at 11am. No cows were injured (or tipped) in the creation of this delicious 6% chocolate milk stout. #MilkStout #CowTipper

Cow Tipper is a chocolate milk stout brewed with chocolate and lactose.

#Dinosmores makes it seasonal debut tomorrow at our bottle shop. We open at 3pm, if you were curious.

Dino Smores is described by the brewery as “imperial stout with graham flour, marshmallow fluff, vanilla, and cocoa nibs.”

Hey pussycats. Please note that some of the Stone #EnjoyBy 02.14.17 Chocolate & Coffee IPA is quite cloudy / yeasty. If you’re at all concerned about it, you shouldn’t be. It’s an #unfilteredIPA – just as intended and delicious! So enjoy the heck out of it. The yeast appearance can occasionally be pretty typical of an unfiltered beer that hasn’t aged long in the cold tank so consider it the freshest of unfiltered beers! And just in case some folks still want to complain about it being too funky looking, be aware that there have been plenty of people who have gotten in a royal bundle sometimes that it’s not cloudy enough. Maybe we should just let them shout at each other across a protest line…while the rest of everyone else kicks back, drinks it and says “Mmmm…tasty!” 📷 @mbeach717 #flirtatiouslyfresh #stonebrewing

Enjoy By 2.14.17 is a chocolate and coffee IPA brewed fresh to be enjoyed by Valentine’s Day.

Chocolate Rain is a high intensity imperial stout aged in bourbon barrels with cacao nibs and vanilla beans. Share this one with several friends!

Sexual Chocolate is an imperial stout, described by the brewery as “a cocoa infused Imperial Stout. Opaque black in color with a dark brown head. Big chocolate aroma with notes of espresso, blackstrap molasses, dark sweet toffee and dark fruit.”

Red Velvet is a new release from Ballast Point, a golden oatmeal stout brewed with beets and chocolate. The brewery describes it as “Our Red Velvet oatmeal stout is a mind-bending beer. Like the cake that inspired it, the deep red color comes from beets, which add a rich, earthy character that complements the chocolate flavor and aroma. The foamy head of the nitro pour is our ‘icing,’ adding a creamy smoothness to the mouthfeel. But this liquid dessert still finishes like a beer – not sweet, but just as satisfying.”

Chocolate Obsession is an imperial chocolate stout perfect for your Valentine’s Day dessert. The brewery describes it: “Chocolate Obsession’s stunning chocolate flavor derives from the combination of hundreds of pounds of chocolate malts sourced from all over the world and ridiculous amounts of South American grown cocoa nibs. Stunning chocolate flavor, full bodied and quaffable. Tastes as if it were dipped in chocolate and made to be imbibed with the one you love. Pour the bottle, turn off the lights & cue the music.”

The Nib Smuggler is back! Starting today in our taproom and this week throughout the state you can find our winter seasonal which blends our creamy milk porter with a borderline illicit amount of cocoa to deliver a chocolaty ride you won't soon forget. Pick up a four-pack at your favorite craft beer retailer, but do it soon! As with most smuggled things, it's not meant to last. #GetFunky #SeasonalBuddha #NibSmuggler

Nib Smuggler is a chocolate milk porter brewed with cacao nibs and vanilla. The brewery describes it as “the finest, purest black cocoa straight from the source: the rugged mountains of Brazil, where chocolate is life. We smuggled these beans back to our brewhouse, where they were blended with creamy milk porter and fragrant Madagascar vanilla beans. Get cocoa’d up.”

A post shared by Copper Kettle Brewing Company (@copperkettlebrewing) on Oct 8, 2016 at 10:51am PDT

The brewery describes Mexican Chocolate Stout as “a rich black ale with dark roasted malt flavors blended with bittersweet chocolate, our own blend of three Mexican chili peppers and cinnamon.”

If you donut know, now you know—who needs coffee when you have #BlackChocolateStout? 🍫🍩🍻👍

Black Chocolate Stout is a Russian imperial stout that achieves its rich chocolate flavor strictly from the brewing process, a blend of six different malts during three mashes.

We've got the last 30 cases of Starsky & Dutch of the season. Come and get them before they are gone. We're open Saturday 1-7pm with our homeys @fedcitybros. #igdc #madeindc #acreativedc

It's #NationalChocolateDay… More like National #Choklat Day, right?! This @ratebeer 100 rated Imperial Stout is already on a lot of taps and shelves. Check stbcbeer.com/beer-finder and treat yoself this Friday / National Chocolate Day!

Choklat is an imperial stout brewed with bittersweet Belgian chocolate.

Chocolate Porter as described by the brewery: “We start with a brown porter brewed with dark roasted malts, and add one pound of chocolate per barrel. We then throw in some Madagascar vanilla beans to accentuate the chocolate flavors, resulting in a decadent porter.”

Calm, cool and handcrafted. The brewery is silent now but join us tonight and let's #liftonetolife! 📸: @photogdslavey

Graeter’s Black Raspberry Chocolate Chip Milk Stout is a beer incarnation of the most popular flavor of ice cream from Graeter’s in Cincinnati. The brewery used the same black raspberry puree that Graeter’s uses in its ice cream along with bittersweet chocolate chips.

We recently brewed our last batch of Hop Cocoa for the year. This winter seasonal is going away in order to make room for Hop Burglar, our blood orange and grapefruit IPA. So, if you long for one last crack at winter, this Chocolate Porter may help. #WickedWeed #HopCocoa #Asheville #AVL

The brewery describes Hop Cocoa as “a smooth porter that packs a potent chocolate punch into every sip. Authentic Dutch cocoa powder combines with robust, dark cocoa nibs from our neighbors at French Broad Chocolate Lounge to create a silky smooth balance with our heavy handed hopping process. This dark beauty is a comforting companion at the end, or beginning, of any day!
*marshmallows not included”

It sure feels like #spring in #colorado! Yesterday it was 70 and sunny. 😎☀️ Today we are getting tons of snow and making beer snow angels! ❄️🍻 Thanks @lucklys for sharing! #OdellintheWild #lugene #milkstout #craftbeer #snowday #getoutside #regram

The brewery has a neat story explaining the name behind their Chocolate Milk Stout, which is brewed with milk chocolate. “If you’ve ever been to our brewery, you’ve likely seen the old, beat-up truck that hauls away our spent grain. That truck belongs to Lugene, a local farmer who’s been feeding his dairy cows the hearty malt for over a decade. Named in his honor, Lugene Chocolate Milk Stout is brewed with milk sugar and milk chocolate. The rich and creamy brew reminds us of a cold glass of chocolate milk, and our hometown ‘Aggie’ roots.”

Ho Ho Ho! Red Sea of Cacao into bottles yo!

The Nothing | Smog City Brewing Co.

The brewery describes this imperial stout as a “double chocolate imperial stout aged on raw cocoa nibs is about as decadent as they come. This fan favorite is brewed once a year and its anticipated return is wide spread. Named in honor of The Neverending Story’s character, The Nothing, who was the embodiment of lost hope and dreams and is set upon destroying Fantasia.”

Where are our Double Chocolate Milk fans at?!

A post shared by Lancaster Brewing Company (@lancasterbrewingcompany) on Dec 19, 2014 at 11:34am PST

This Double Chocolate Milk stout is brewed with cacao nibs, which gives it that chocolate punch.

(Read More: 10 Dessert Beers You Should Be Drinking After Each Meal)

Rye Barrel Chocolate Porter is here! Currently available at the tap room, and rolling out to all markets in the next couple weeks! #cwbrewing #centralwaters #craftbeer #solarpowered #independent #barrelaged

“Chocolatey beyond compare, Rye Barrel Chocolate Porter is made with our Imperial Porter brewed with cocoa nibs and oatmeal for body. Aged in rye barrels, this small-batch ale goes down like a bourbon and dessert all in one,” as described by the brewery.

When you find out @sixpointbrewery 4beans wont be locally available until 8/10 – easing the blow with @westbrookbrewingco Mexican Cake. TGIF 🍻

The ever infamous Mexican Cake is brewed with cacao nibs, vanilla beans, cinnamon and habanero peppers.

TGIF, y'all! Join us on the Mountain tonight for the official re-release of Cocoborealis, our decadent triple chocolate stout! The first kegs of the fall and winter season have been tapped and we've got it flowing on our nitro tap, as well as a second regular tap for growler fills. There's plenty of six packs and cases available to go as well! @_rickswrapitup_ is here slingin' chow and we've got live music by Kyle Forry and Justin Arnett from the @barefootwestband starting at 6. See y'all on the Mountain! #ChaosMountainBrewing #ChaosIsBrewing #CraftBeer #VACraftBeer #VABeer #VABrewery #DrinkCraft #DrinkLocal #Cocoborealis #ChocolateStout #StoutSeason

Cocoborealis is a triple chocolate stout brewed with two chocolate roasted malts and cocoa powder, then is aged on cacao nibs.

The rest of the Chocolate Gang: 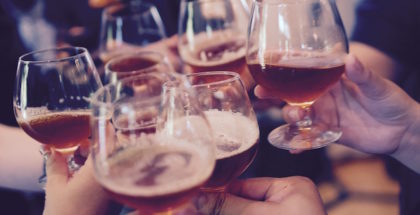