How does a brewery in today’s craft beer market keep a specific beer around and keep it relevant? One way to do that would be to have a rotational series of a specific beer that feature different hops and ingredients each time it’s brewed and released. Although that’s a very good start, that’s not all that goes into keeping a beer alive. Obviously, each version would have to be of superior quality and taste as well. We’re going to take a closer look at the latest offering from Wild Leap Brew Co out of Lagrange, GA and their Alpha Abstraction rotational series of Double IPAs.

It’s hard to fathom that the Alpha Abstraction series is already up to the 20th volume in their rotational series. Wild Leap first released Volume One back in 2018 and hasn’t looked back. Each volume in the series is a Double IPA coming in at 8% ABV and features a different hop profile with each one. Volume 20 (or XX as it’s labeled on the can), is hopped with Cryo Trial 603 and Mosaic Cryo and it’s loaded with that juicy goodness that we’ve all come to know and love from this series. Going back to my question above though, how do you keep that beer fresh and exciting? We had the pleasure of picking the brain of Chief Brewing Officer, Chris Elliot to find out more about what keeps this series alive.

Chris explained that when they started the Alpha Abstraction series, they had a list of over twenty-five hops they wanted to feature. Since then, the industry has developed so many new hop varieties and hop products that Wild Leap can barely keep up. Chris notes that “There’s always an exciting hop that they can’t wait to test, and because we only do about 6 Alpha Abstraction volumes per year, we usually have a short list of the most exciting varieties.” Each volume of Alpha Abstraction begins with a brainstorming session as part of a plan and product calendar every fourth quarter. Chris noted that at least half of the Alpha volumes change before they brew due to supply opportunities or shortages, “It’s an incredibly dynamic series, and that is part of the fun for us,” said Chris.

Chris also explained that, although they try to plan in advance, they have had quite a few volumes that were impulsive hop decisions. A last-minute call from a hop rep about a new experimental variety or a pilot batch with surprising results. Or, finding a hop farm advertising an old school variety grown in a different terroir, “We can always count on last minute changes that will drive our marketing department crazy,” said Chris.

When asked about the hops used in this version, Chris explained that they try to do something special for every tenth volume and this Alpha was no exception. One of their favorite hop products last year was YCH Cryo Trial 603, which Yakima Chief casually called Cryo Trial Blueberry. It was a hop blend with a lot of “survivable” compounds with huge berry and blueberry notes. Wild Leap paired that with their favorite “berry-forward” hop product in the form of Mosaic Cryo. The result was an Alpha Abstraction with huge berry aroma and flavor, “we are very proud of this volume,” said Chris.

One of our absolute favorite aspects of the Alpha series besides the flavor, is the fact that it still comes in twelve ounce six packs. The majority of this style of beer today comes in the sixteen ounce four-packs, so you are getting an additional eight ounces of beer, or for convenience, two extra cans. When asked about why Wild Leap continued to use the six pack, Chris said it was a decision that Wild Leap put a tremendous amount of thought into. Chris noted that they received a lot of push back when they first released the product because the “unofficial” standard packaging for that style was the sixteen ounce four-pack. However, they chose to go with the twelve-ounce six pack for three main reasons. First and foremost, they wanted to offer the best Double IPA value on the beer shelves, and they felt this format was the best to help customers compare with other brands. Secondly, it is the most common format on retailers’ cold shelves, which is where Wild Leap prefers to store all of their beer, especially fresh IPAs. Lastly, the twelve ounce is the most common can size, so as the industry experiences aluminum shortages they have the best chance of preventing supply chain issues. “Personally, If I plan on have a few beers, the twelve ounce is the perfect service size for Double and Triple IPAs”, said Chris. While we know this is a matter of opinion for most folks, but we couldn’t agree more with that sentiment.

With all of that said, the Alpha Abstraction series, specifically Volume twenty that we are writing about today, is one of the absolute best values in the craft beer market today for the Double IPA style. You get loads of juicy flavor with subtle hop bitterness with each volume. Not to mention you’re getting an 8% Double IPA that drinks like a 5% beer.

If you can find this beer near you, go give it a try, you won’t be disappointed! Maybe even discuss with friends which version is better? That always seems to be a common theme with this series. Cheers! 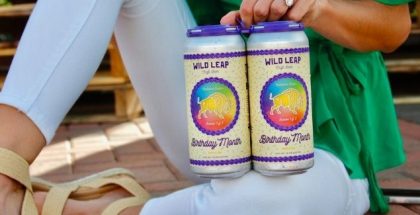