Second in our series of Denver-area father-son breweries, Seedstock Brewery had a long and successful history under brothers Ron and Jason Abbott before being sold to the McIlvenna family in late 2021.The McIlvennas look to continue making Seedstock’s flagship styles, while adding touches of their own heritage.

A Long Path to Brewery Ownership

For father Jerry and son Adam McIlvenna, the purchase of Seedstock was the culmination of a long route to brewery ownership. After years of homebrewing and working together at a brewing-supply store, things finally fell into place for them to buy Seedstock in 2021. They were joined by Jerry’s wife and Adam’s mother Kathy who is both an owner and involved in brewing operations.

Jerry initially homebrewed when Adam was young but gave it up as his children entered their teenage, beer-experimentation years. The current partnership came about when Adam approached Jerry as an adult about brewing together. Jerry was excited to share their common interest. “We jumped in whole hog,” he says.

The pair became such frequent customers at The Brew Hut, their local brewing-supply store, that the manager asked them to come on as employees. Over years of brewing and working together, Jerry and Adam also entered and won awards at numerous competitions including the Great American Beer Festival Pro-Am.

The McIlvennas kicked around the idea of opening a brewery and even created a brand and LLC but the timing was never right. However, when the former owners of Seedstock decided to sell, it seemed like a great fit. Jerry and Adam had brewed at Seedstock before and were already comfortable operating the system.

The business operations take on a similar dynamic to Diebolt. Son Adam primarily focuses on brewing and beer development while father Jerry covers the business side. Both work on recipes. Says Jerry, “Because I enjoy so many styles of beer I can’t say that Adam and I are ever at odds about what should we brew.”

The McIlvennas find that working together at the brewery comes easy due to the longstanding family relationship. Says Adam, “There’s days when we’re brewing, and we don’t have to talk. He knows what he needs to do, I know what I need to do. It was the same thing at home. If one person wasn’t doing something the other person jumped in and did it.”

One topic that has generated light-hearted disagreement over the years is recipe changes. Jerry explains, “A given beer would bring home a medal and Adam would say ‘Well I think we ought to do this or that’” to change it. Jerry’s opinion was, “Just leave it alone!”

Jerry explains what their father-son bond means to him. “The real great connection with Adam and I is the passion for craft beer and the really cool thing is that we get to share that. That’s something that not every father and son get the opportunity to have . . . to have a common passion and then be able to do something with it.”

Seedstock will celebrate dads with beer and food by hosting a Father’s Day potluck on Sunday. Stop by and sign up with the bartenders, then bring dad by for a feast and a beer!

Next Up: A son takes an interest in his father’s brewery business and makes his own mark as their brewer.

Bean to Barstool Podcast | Everybody Is Welcome: Em Sauter of Pints & Panels 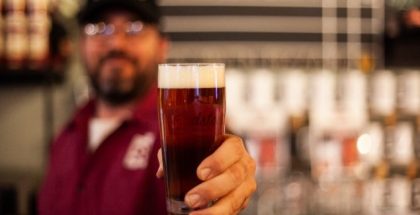 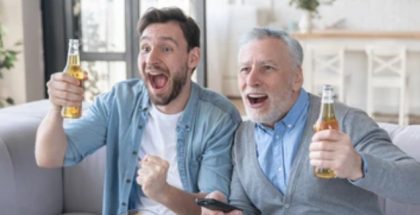