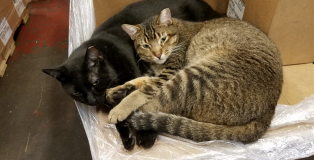 Located in the heart of Ravenswood’s Malt Row, Empirical Brewery has drawn a significant following thanks its scientific approach to brewing and great sour beers. Oh, and the cats are a huge draw too. You won’t find them roaming around the taproom or on much of their branding, but there’s no doubt that their three Ghostbuster-themed cats, Venkman, Egon and Raymond have had a significant impact on the staff at Empirical and on their business as a whole. On a given Saturday brewery tour, it’s common for patrons to be more interested in finding the cats hidden amongst pallets or perched in their cat castle than getting a close look at Empirical impressive experimental brewing system. We asked Head Brewer and COO Jacob Huston about his feline employees and how they’ve become a vital part of the brewery’s family – and business. END_OF_DOCUMENT_TOKEN_TO_BE_REPLACED 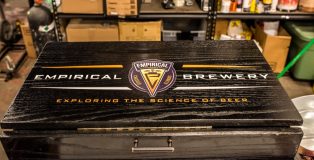 A lot has changed over the past year for Empirical Brewery. They moved to self-distribution, the brewpub, just a stones throw away from the taproom, is in full-swing, and they are moving from bottles to cans. There’s a lot of great beer coming out of the small taproom in Andersonville so we went out there and spoke with CEO Bill Hurley and Head Brewer/Taproom Manager Jacob Huston about Empirical, craft beer in Chicago and the industry in general. END_OF_DOCUMENT_TOKEN_TO_BE_REPLACED

When I think of the combination of beer and basketball, initially my mind drifts towards Trey Parker and Matt Stone’s critically acclaimed, Oscar nominated, box office smash hit BasketBall.  While their biopic about the creation of America’s newest national … END_OF_DOCUMENT_TOKEN_TO_BE_REPLACED