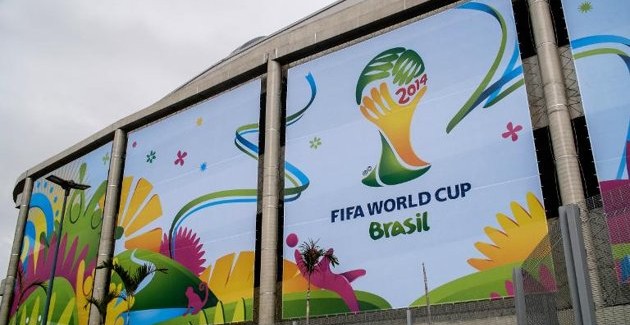 It’s that time again. Thirty-two teams representing nations from across the world come together for one reason. To give us an excuse to drink for a month straight! Oh, and something about national pride and the glory of being crowned the greatest team in the world’s most popular sport. That too.

For the next 30 days it will be impossible to escape the World Cup. The atmosphere will be composed of atoms in the form of soccer balls. You’ll breathe, sweat, and bleed fútbol — so you might as well taste it as well with a great drinking game. Don’t be worried if the only thing you know about soccer is that it’s what David Beckham did before he became an internationally renowned underwear model. There’s no better time than now to learn the game and find people to watch it with than now. Just like in craft beer culture, the few snobs that exist are far outnumbered by the people who are looking to bring more fans into the fold.

What you need to play the World Cup Drinking Game:

1. A drink. Literally any drink will do. Your focus is on enjoying the game, not making sure you have 18 necessary items and four drink variations. In a perfect world, you’d drink a beer from the team you’re rooting for. However, we understand it might be difficult to get your hands on some brews from Greece or the Ivory Coast.

2. A team. Even if you’re the biggest die-hard fan of your country,  you still have an insane number of games on your must-watch list that your boys won’t be in. Pick them cause you like the country. Pick them cause you hate their opponent. Pick them because you think orange is an under-utilized color and the Dutch pull it off so well. Just make sure to root for someone.

Remember, the ball is round. The game is 90 minutes. That’s a fact. Everything else is pure theory. Here we go!

World Cup Preview Part One: Groups A, B, D, and G