Canada: our neighbor to the north. Most of the beer stereotypes about Canada involve strength over weaker American macros. While this may hold when comparing Bud Light to Molson Canadian or Labatt Blue, the craft market busts these stereotypes wide open. Those of us who have had 1 or 2 Hog Heavens then stood up can attest to this.

The next thought – certainly one I held – was that the Canadian craft market was small, not many to name. After all, go to your favorite bottle shop and look at Canada in the international section. Aside from the major brewers, there may be a few choices at best: maybe a few Unibroue choices, maybe one or two choices from Dieu du Ciel or McAuslan if you’re in the right region. Nevertheless, offerings tend to be sparse. To put things in perspective, the same can be said about Bell’s in Colorado, or Russian River in Ohio – they don’t exist (outside of a bottle share, or some convoluted Smokey and the Bandit type scheme). The quagmire of laws involved with selling a Michigan beer in CO, or vice versa  is sufficient to act as a significant barrier to entry, imagine the hoops you have to go through to sell a beer across international boundaries.

In June of 2014, my brother and I went on a road trip from Ohio to St. John’s Newfoundland via Montreal and Quebec City. As a beer lover, this was the perfect opportunity to get a first-hand view of the state of the Canadian micro industry. In the next few articles of this fleeting series, I’ll be giving you my brief travelogue, one pint at a time.

On the first (non-travel) day of our trip, we found ourselves in Montreal. I’ve been to Montreal before, so I had a good idea where to go for our first beer.

After checking out the Montreal Jazz Festival and the old city, we procured a pair of BIXIs (Montreal’s fantastic bike share system) and headed to Dieu di Ciel (DdC). For those of you who keep up to date on Beer Advocate or any of the other major beer rating sites, you’ll know DdC is the Elephant of in the room of Canadian Crafts. One of the best brewpubs in North America. We each ordered a pint of #13 and started our journey.

This beer has a lovely straw color, with a light white head and a biting aroma of citrus and hops. Disco Soleil is brewed with kumquats, another of the underappreciated citrus varieties. The kumquat  is subtle – so often a “fruit beer” trends towards the oft dreaded (and relatively new) shandy category. This beer is no shandy. The sharp hoppiness at the front of the beer is perfectly punctuated by the citrusy tinge of the kumquats that peak at the back. This beer has an asininely good malt balance, the hops are bright and floral, and they perfectly cut the slightly sweet maltiness, without any lingering bitterness. I really enjoyed this beer. 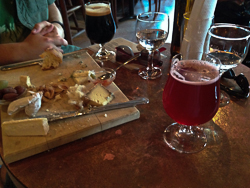 After the first beer, it was time for a cheese board, DdC delivered – they presented an amazing cheese board with 4 Quebec cheeses and a generous supply of bread and nuts. This calls for another beer! I ordered the Solstice, described on the menu as a “raspberry ale”.

The tulip glass that the server brought me can only be described as the shade of red clown makeup. It was crazy how red this beer was. Even the head looked like someone had taken a can of candy apple red spray paint to it. The first sip was of perfectly unripe raspberries. Sour. Exploding with raspberry flavor.  The raspberry flavor is so intense that you can almost feel each individual berry breaking in your mouth. The danger with a beer like this is that the sweetness can be off putting. No danger of that here, there is little sweetness to be had, but the little that there is helps to balance out the tartness of the berries. This is the perfect beer for a porch drink on a hot summer day. One of the best fruit beers I’ve ever had.

Welcome to the InterNEAT! Volume 49