Best story of the week: Barack Obama ordered a ton of craft beer for Air Force One. Other great stories include Mikkeller making a home in the US, another step towards the end of the Florida growler ban, and many beer releases. I summarized the craft beer news of the week so your short attention span could handle it. Read on to get the details of these stories and more in this edition of the Weekly Growler Fill.

According to these reports, Mikkeller may be ending it’s “gypsy brewing” ways very soon. The Danish beer maker is said to have struck a deal with AleSmith, in which Mikeller would partner with AleSmith at one of their old brewing facilities in San Diego when they vacate later this year. The brewery will produce primarily Mikkeller beers, but other creations may be in the works. Currently, details are vague. One of the great things that could come out of this is cheaper Mikkeller beers, which are priced on the higher end due to shipping from Europe to the US. We will report further details about this collaboration as they come our way.

Hop heads, unite! It seems quite appropriate that as I write this, I’m drinking Stone’s Go To IPA. Statistics from 2014 show that IPA sales increased by 48.7%, according to IRI, a Chicago-based market research firm. Craft beer sales overall increased by 20% with IPAs accounting for a quarter of the craft market. Suck on that, craft haters!

Back in November I told you about Anheuser Busch/InBev’s plan to take over the Owensboro, KY distributorship and how it would threaten the three-tier system. In doing this, they could theoretically push retailers to sell more of their products which would hurt smaller craft breweries. Well, they did purchase that distributorship and they now own two in KY. To be fair, ABI now distributes more products from outside companies than were distributed before they took over. Still, the craft brewers are rioting and their pleas are being heard. On Thursday, a House Committee approved a bill, “that would require Anheuser-Busch to sell its two distributors and ban it and other brewers from owning any in the future.” The problem is, many of the committee members that approved the bill said they will likely vote against it when it is time to pass it through the House. Hopefully the groups can come up with a compromise that would create a more level playing field for everyone.

Florida is One Step Closer to Ending the Growler Ban

If you read The Growler, you’ve been reading about this story for weeks on end. Brewers in Florida have been pushing state legislators to end the ban on 64 oz. growlers. The reasons this process is moving so slowly are: 1. it’s the government and 2. distributors are pushing against it because in a way, it violates the three tier system. If a brewery sells growlers, which are ‘take home’ vessels, they are selling directly to consumers and avoiding the distributor and retailer all-together. (Stepping on my soap box) I’m no expert, but I just can’t imagine how allowing 64 oz growlers could cause catastrophic financial damage to other institutions. It may even help them in the long run as breweries could become more popular and see increased retail sales. (End soap box rant). Nevertheless, multiple bills have been making their way to the Florida House of Representatives and all were passed through committees this week. Only a few more steps until one finally becomes a law.

No matter what your feelings are about the President, you have to agree this story is pretty damn cool. Four bottles of Pullman Monumental Lager by Argus Brewery were given to Rahm Emmanuel, one of Obama’s homies and former White House Chief of Staff. After hearing rumblings about this delicious brew, Obama was intrigued so he set his boys to work. A little bit later, Argus Brewery was contacted by the Secret Service with a request for four cases of Pullman Monumental Lager, intended to stock Air Force One. Obviously, the brewery obliged the request. The part of this story that I find most intriguing is the fact that our President ordered not one, not two, but four cases of the craft beer. I have a feeling that Barack likes to slam a few brews in his spare time and I’m totally cool with that. Cheers, Mr. President.

Fort Collins Brewery – Maibock,  A gold medal winner at BTI World Beer Championships that features a smooth malty flavor attained from the richness of Munich malts that finishes with a gentle warming sweetness. It is brewed in the fall, aged in the winter, and celebrated in the spring. (available this week) 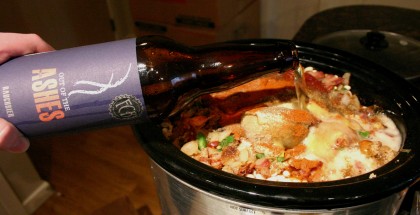