Brew Ha-Ha features more than 100 beers and 50+ comedians on four stages in downtown Cincinnati at Sawyer Point over the course of three days. There is a lot going on. If you’re coming for the comedy (not the beer) the whole thing is free. You can just walk in and have a seat in front of whatever comedian you like. If however, you want to sample a few different brews while you stew in Cincinnati’s characteristic summer humidity, that’ll cost you. $5 to get a wrist band, then $1/ticket after that. One ticket gets you a 2 oz sampler, or you can use 5 for a full beer. Not a bad deal. 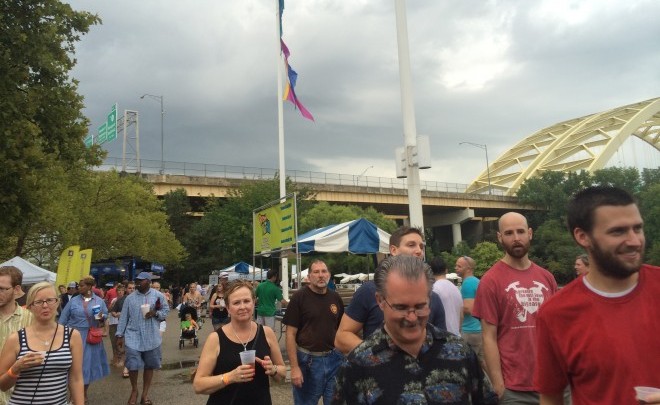 As for me, I sampled a lot of beer. Now, I know it’s not fall yet, but there are a couple Pumpkin beers in there. I consider this research and preparation for the fall, not cheating.

New Belgium Snapshot— This crisp and citrusy wheat beer is just a little sweet. I would love this on a hot day. (Which this was not, but I loved it anyway.)
Rivertown Pumpkin—I think this is the most pumpkin-y of pumpkin beers I’ve had… and I think that’s a good thing.
Rhinegeist Oktoberfest— This is definitely the least hoppy beer I’ve ever had from Rhinegeist, and will likely entice me back to their taproom this fall.
Kentucky Pumpkin Barrel Ale— Another pumpkin beer, differentiated by the characteristic sweetness of Alltech’s bourbon barrel aged line.
Ei8ht Ball Tarnished— Bready, malty, and citrusy.
Moerlein Barbarossa Dark Lager— Tasted deep and malty, but had a thinner mouthfeel than I expected.
Founder’s Rübæus— Very, very raspberry.

And then I ate some soba noodles from Island Noodles which were amazing and exactly what I needed to get a few more tasters in me before the end of the night.

Deschutes Black Butte— I’m a sucker for a good porter, and this went really well with my noodles. The notes of chocolate combined with a little bitterness at the start of each sip remind me of a good dark chocolate.
Rivertowne Hala Kahiki—This beer has strong notes of pineapple, but it’s not sickly sweet. I could drink it for days. Days! I was very sad when I realized this is Rivertowne and not Rivertown. The difference is that Rivertown is a Cincinnati brewery, and Rivertowne is in Pittsburgh. As a Cincinnatian, I am supposed to dislike all things Pittsburgh, but I just can’t. The event guide states, “A beer so enticing you may think it’s nectar from the gods.” I cannot disagree.
Southern Tier Pumking— Okay, this was cheating. I just really wanted it. The notes of vanilla remind me of my mom’s pumpkin pie.
Southern Tier Warlock— Also, just wanted this. It was late in the night, and the combination of pumpkin and rich malts makes this one of my favorite beers ever. I can’t deprive myself. 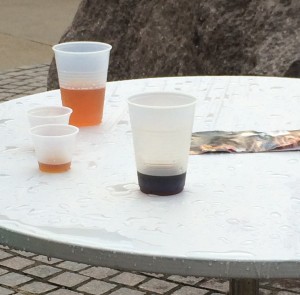 Brew Ha-Ha goes on rain or shine, and while I was there Saturday there were several downpours. It wasn’t the worst thing though. Some of the beer vendors opened up their booths to allow people a shelter, and when there wasn’t enough room, one guy at the Lazy Magnolia & Summit booth even gave me his umbrella! So, I offered to share it with some other people who were huddled under a tree, and made umbrella buddies. Nothing brings people close quite like beer, a torrential downpour, and an umbrella. 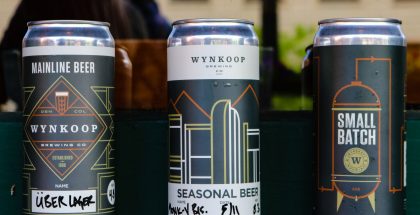