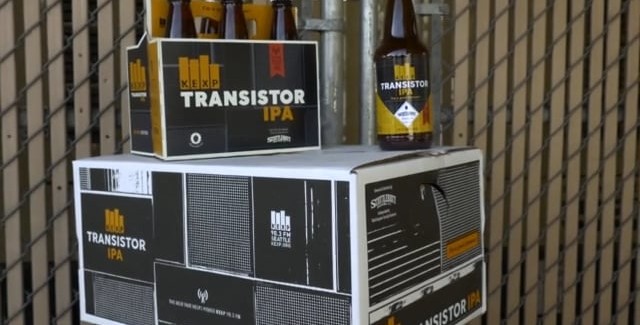 If you don’t live in Seattle, the letters KEXP might not mean much to you. If you do live in Seattle, you know that these are not just four, jumbled letters. KEXP is 90.3 FM – the radio station bringing the Emerald City innovative and experimental culture, groundbreaking music and now, great… beer?

KEXP was founded in 1972 with a goal of bringing culture, through music, to its city. And, of course, there are worse places to start a radio station than Seattle. Seattle is the home to Nirvana, Pearl Jam, Soundgarden, Band of Horses, Fleet Foxes, Macklemore and countless others. But as the city has evolved through the years, music is not the only thing that continues to push limits. Beer does too. And KEXP took note.

Cue the birth of the KEXP Transistor IPA from Scuttlebutt Brewing Company. The beer was formed in partnership between the two companies and will help to fund KEXP’s new offices as they grow as a station.

This beer is brewed with the culture of Seattle at heart, and uses key ingredients to capture the distinctive flavor of the Pacific Northwest. Scuttlebutt has paired barley from Vancouver, Washington, Columbus, Chinook, Glacier and Nugget hops from Yakima Valley, Washington, yeast from Odell, Oregon, and some of the nation’s finest drinking water from the Spada Reservoir in the Cascade Mountains to craft a perfect, refreshing IPA.

This beer proves that the beer of Seattle is on par with the music when it comes to its distinction, its fandom, and of course, its taste. So pour this into your glasses, crank up the tunes and let the culture of Seattle completely take over your mind and palate.

Transistor IPA is available at retail establishments throughout greater Seattle, and 100% of the net proceeds with benefit KEXP’s New Home capital campaign.