Carrboro’s Steel String Brewery has grabbed my attention once again. This time, for their Berliner Weisse, Der Schneid. From what I can muster, “der Schneid” translates into something like guts or courage. It’s difficult to be sure, since the only context is a funny bunch of buggy, alien-y cartoon characters on the bottle.

Regardless, Der Schneid is a Berliner Weisse, a style characterized by its cloudy appearance, relatively low alcohol content, and sourness. In my book, Der Schneid scores well on all three. When first poured, the liquid looks translucent yellow, but as the glass fills, a tinge of red emerges, as though someone juiced a grapefruit over the glass. Any head that forms readily dissipates and creates tiny popping sounds, reminiscent of club soda. Der Schneid gives off a musty, earthy scent, something I’m used to smelling in farmhouse ales. When tasted, the beer’s tart, acidic character hits the tongue immediately and is followed by mild fruit sweetness, with little in the way of hoppy bitterness. Thanks to its low ABV, Der Schneid is readily drinkable. All together, it’s a refreshing beer with enough zip to linger on the tongue and in the mind.

According to their beer map, Steel String distributes to a dozen or so locations all over Raleigh, Durham, and Chapel Hill. As always, call ahead before getting your heart set on picking it up.

If you’re ever in Carrboro, I highly recommend dropping into their taproom. For the colder months, the inside is nice and cozy, and for the warmer months, they have plenty of outside seating.

Inside the Tank | Off Color Brewing’s John Laffler 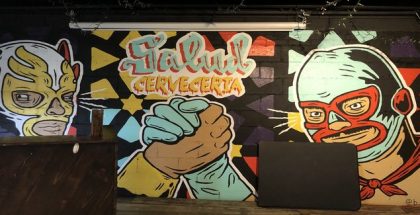