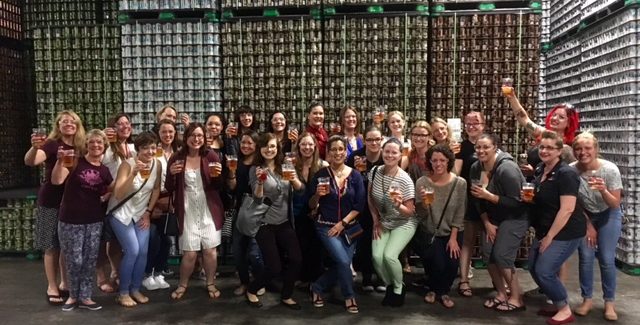 The last time I was at this location, it was for a friend’s wedding, and the atmosphere and energy of the space was completely different from the moment I crossed the threshold. When I walked through the doors and up the metal steps, my ears were greeted with jovial sounds of people talking, laughing and alternative music. There was a high lofted ceiling with exposed pipes and ventilation system, a dark wood bar lay directly in front of me which was the length of the room on the western wall. Floor to ceiling windows made up the north wall between the Taproom and Brewery, long community tables lined the open space, hundreds of barrels lined the east wall next to a gigantic American flag. 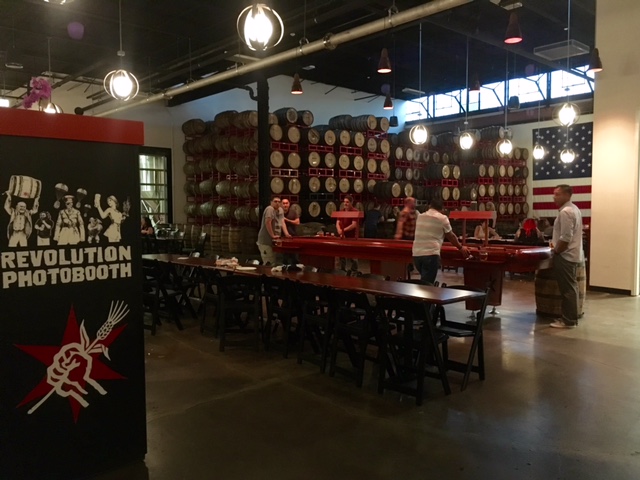 I moseyed on over to the larger group of women in the back niche and was greeted with the elated faces of Kylie and Shannon, our amazing hosts for this event! They handed me a Rosa, Revolution’s Hibiscus Ale, asked me to pick a spot to get to know the other ladies in attendance, and told me the brewery tour would begin at 6:30 sharp. If you hadn’t guessed by now, this event was an all-women event put on by the Chicago chapter of Barley’s Angels, an all-women beer enthusiast group. Each place setting had a beer tasting sheet, labeled with the beers we would be sampling throughout the evening: Rosa, Rev Pils, Rhine Rye, IL Golden Ale, Crystal Hero.

Once the clock hit 6:30, my very first event during Chicago Craft Beer Week had officially begun with the tour of the Rev Brewery! I felt an overwhelming sense of community, and was privileged to be in attendance at the Barley’s Angels Women of Revolution Brewing event. I was surrounded by women of all ages and backgrounds. Their love of craft beer, of Revolution’s brews to be specific, is what brought us together. We donned our stylish safety glasses, grabbed our pint of Rev Pils, Revolution’s take on a German Pilsner, and we were introduced to the 3 Revolution women who would be guiding us through our tours and tastings: Katie, Dre and Ray!

Katie is the Beer Traffic Controller for Revolution

What this means is that no beer leaves the premises of the warehouse without her consent! It may seem to be a lot of responsibility, but after 14 years in the industry, this lady knows the in’s and out’s of every part of the Revolution Brewery, from the hops, to the canning process, to the final distribution. She allowed us special access to ‘Katie’s Room’ or the large cooler in the brewery that was added due to rising demand. It is normally closed off to everyone, but she showed us all of the final products that were ready to be shipped off. Even the chairman of the board informs Katie when he is going in. Needless to say, it made me feel pretty special, even though it felt like a Chicago winter in there.

Dre is the Brand Activation Specialist for Revolution

She handles and coordinates all of the beer and giveaways at events that they attend or sponsor to ensures that everyone is having a great time and the beer is served cold and fresh.

Ray is the Communications Specialist for Revolution

She is in charge of all of the social media that is Rev is posting daily! She has been with revolution full-time for a year, after starting her career there as an intern back in 2014.

After the three ladies of Revolution introduced themselves and explained the role they play, we started our tour of the brewery, pint in hand. The very first thing  that Katie told us was that May 25th is the anniversary date for the opening of the warehouse and taproom!

After that, each of the ladies took a turn explaining every section of the brewery in great detail. Our 1st stop was the canning line. 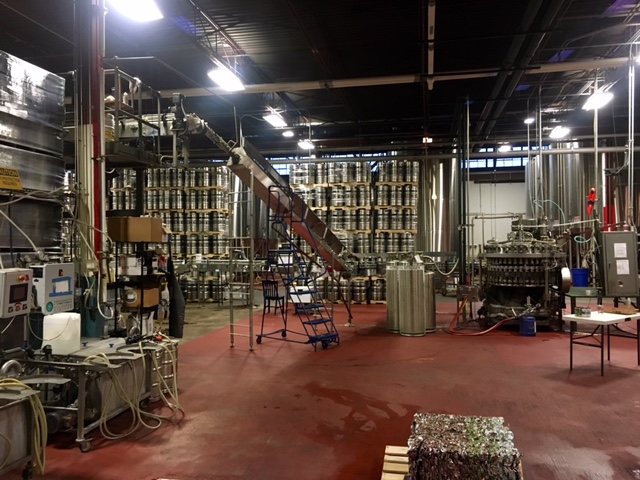 It is a renovated 1970’s RC Cola canning line and they package and fill all of their cans. I learned two interesting facts:

1)  Revolution is moving away from bombers and will be canning all of their beer moving forward.

2)  They are now producing personalized kegs and distributing them! 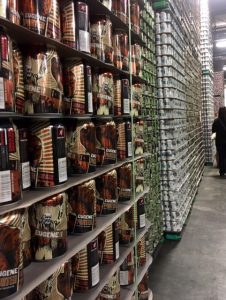 A few of the reasons for these shifts are that they will help keep the beer colder for longer, protect against light for a longer shelf life, and kegs and cans are more environmentally friendly. It is essentially a mini keg for your beer. The only beers to remain in bottles will be their barrel aged series, when they are released. 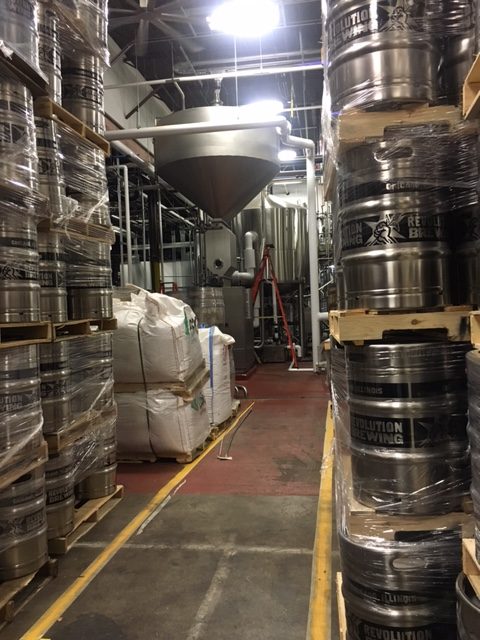 We then made our way to the malt and hops silos, walking through the malt section which smelled so sweet and delicious, to the new 800-barrel fermentation tanks. These were the brewers’ ‘new toys’ and they are expecting 4 more 800-barrel tanks in a few weeks, which will up their production to 140,000 barrels. We were also introduced to the wet mill that they have on site. Revolution has 1 of the 9 wet mills in the country and it helps with the production time of their beer. The other breweries to have them are Bell’s, Firestone and Sierra Nevada.

We finished off our tour with Dre teaching the group about Rev’s barrel program. The warehouse is where the deep wood series beers are being held. Almost all of the Woodford Reserve barrels in this picture are silently working for 9-12 months to produce one the 6 beers in their deep wood series. In November they are slated to release Batch 1000, an Imperial Brown Ale. So be on the look out for it or stop by 1 of the 2 locations in Chicago. 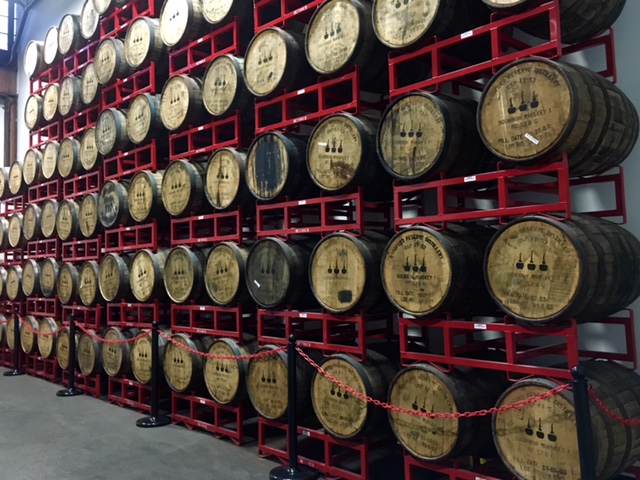 After the tour was completed, we were led back to our seats for a beer tasting, accompanied by exotic pizza from Dimo’s. I was extremely excited for Dimo’s since they are known for their wacky combinations. I chose the Mac & Cheese pizza and Caprese and was not disappointed! 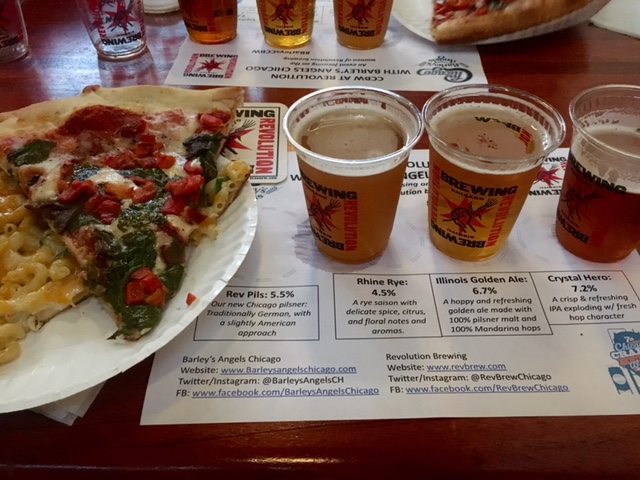 Once everyone had food in their bellies, the Rev ladies began to pass out the brews to each table. The three beers were Rhine Rye, IL Golden Ale and Crystal Hero. Dre went around to each table, as it was little loud with the laughter, music and chatter of the other patrons, and described each beer individually as we sipped them and formulated our own opinions.

My favorite beers of the tour were the Rev Pils and the Crystal Hero. The Rev Pils came in at a 5.5% ABV and was light, fresh and slightly hoppy for a Pilsner which was a nice twist to experience. Crystal Hero came in at a 7.2% ABV and it is brewed with Crystal hops, which give it a light body bursting with fresh citrus flavor. 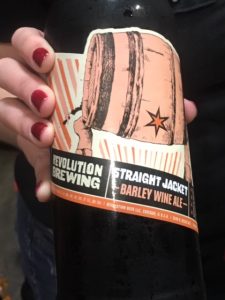 To end the night, the Rev ladies cracked open a 2014 Straight Jacket, a barrel aged barley wine with strong notes of fruit and bourbon a little vanilla, and had a quiz on everything that we had learned that night with little giveaways for the right answers. I am now the proud owner of a Rev church key!

Overall, I absolutely loved this event, from learning about the Rev ladies, to the community of women in attendance, and our wonderful Barley’s Angel hosts, Kylie and Shannon. I will definitely be attending more Barley’s Angels events here in Chicago and, of course, drinking more Revolution brews. 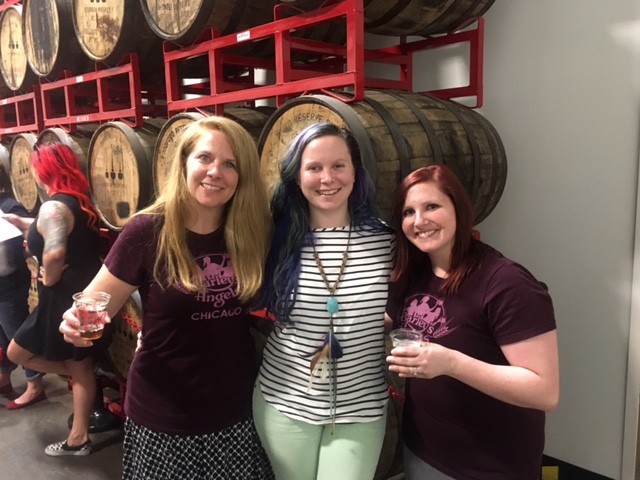 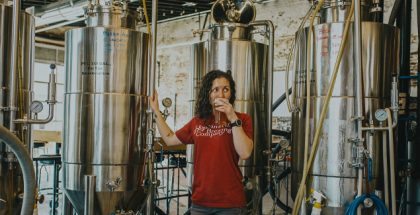