What I know about tailors is from the “here’s what they won’t tell you about tailors” had-to-be-there stories from friends I’ve never seen in fitted suits. I leave work late in the evening to drive to Traverse City, Michigan, expecting early the next day to stand bare-assed in front of a five-sided mirror and a woolen man with circular glasses and pins in his teeth. He’ll shift my inner thighs someplace more manageable, while muttering, “No, no, this won’t do.”

Body image problems aside, I can’t say I have tremendous qualms with exposure and professionals, though past physicals have left me perplexed. The most recent, before a hernia exam, my doctor loosens the shoulder pop and head bob of a violently suppressed hiccup, says, Huh, in the tone of a unneeded answer to a long-forgotten question.

I suppose I exhausted too much energy thinking about it for nothing, since my friend (the groom), his (and kind of my) ma, and his fiancé and I go to a Men’s Warehouse, where there is no tailor. They do have a five-sided mirror, but we don’t use it. We’re measured, fully clothed, in front of other customers by a guy named Josh who is too patient, especially when Ma outwardly objects to a jacket because it’d, “Make you look like a suit salesman.” Four times. Next to Josh, who’s wearing the same jacket.

To be fair, it’s a nice jacket (not that I know anything about fabric; it’s silvery beige with line-things?), but doesn’t exactly fit the happy couple’s plan. They’re looking for something a little more autumn (not seasonally available yet) and old fashioned. They’re traditionally-minded people looking for tweed or something like it. I don’t know. I wasn’t really paying attention.

What I was paying attention to was lunchtime, which we were nearing. My friends knew I wanted to take advantage of being out of the Upper Peninsula and visit a brewery whose water isn’t supplied from Lake Superior. Traverse City (TC) harbors near my second favorite of the five Great Lakes (Lake Michigan, there is a difference) and is most of the reason TC is a tourist attraction.

This is a fair and unfortunate analysis, and I have to sadly admit that I write this as a tourist. I was only a visitor until I bought gourmet popcorn and noticed at least five people staring at my gift bag in a rage (assumed locals) who just want me to leave. I understand that glare; I don’t like me either, or the others, this sea of man buns and sun hats, and campsite novelty t-shirts worn by older men who are sneakered and sockless and leaning against curbside sprouted trees, waiting on wives with matching t-shirts and stretch shorts, whose purses are clenched security-like between elbow and abdomen. This is also the same week Pokémon GO dominated the already-engendered attention spans of youth so badly that navigating the sidewalk has become a damn slalom run. And for these reasons (and others I won’t burden you with), I am not particularly excited to try a new brewery, believing it’ll be another institution that caters to strangers with money.

Luckily when I enter Mackinaw Brewing Company, I feel immediately separated from the tourist vibe; honestly, it feels like I’ve stepped into a renovated train depot, high ceilinged and bricked in places, good natural light, but not blinding. It’s not modern here, and it’s exactly what I need to see, a place that does what it does for you, not because of you.

I order their Red 8 Ale, which brewer Mike Dwyer says is brewed more toward an English ale that happens to be red. I choose the Red 8 for a number of reasons; the main being that a red ale was the first beer I’ve ever had where I discovered that I enjoyed beer (before that I had been served only the generic domestics you’re now supposed to turn your nose up at). Plus, it was recommended that it went well with everything on the menu and I wasn’t about to mix a porter with fish (not again).

The Red 8’s aroma is straight forward malt and a little sweet, and the color is a smooth auburn and nice mahogany, but what I appreciate (aside from the flavor), is it’s texture, which is thick, what I imagine beer first was supposed to be, back in the colonies. Perhaps it’s traditional style is a coincidence to my day, but it’s a welcomed peek into history. I could be wrong about that, but I associate malt as old, and the Red 8 is all malt which is such an easy flavor to over or underdo. At Mackinaw, it’s done just right, and I’d be curious how great it would be to see this served at room temperature, the way it used to be, when colonists were the original tourists.

Take Mackinaw’s word for it and feel free to order just about anything on the menu to accompany the Red 8. It’s a subtle and simple ale that satisfies either hot or cold dishes, particularly sandwiches. Probably avoid dessert, unless chocolate cake or a neutral palate cleansing favorite. For example: not Key lime pie. 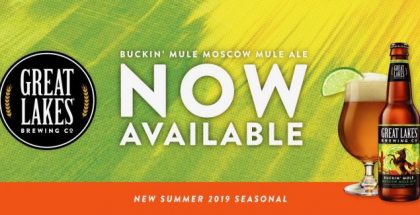