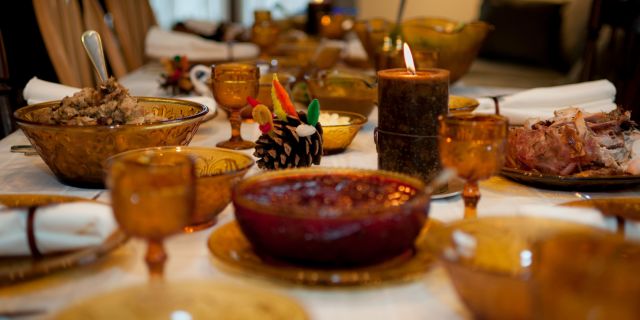 Only the high school marching bands offer live entertainment, while the rest of the parade is bloated with understudy casts performing pre-recorded show tunes, and one-hit wonder Billboard-chart newbies attempting to look excited while lip-syncing vapid hits next to puppets and Teletubbies. The floats are kind of cool, if you mute the scripted minutiae rattled off by the commentators, and a strangely skinny Al Roker donning his Indiana Jones hat while inserting puns and cutesy anecdotes. But this Thanksgiving, the parade may be the best part of the day. Think about it. How long after the turkey is carved might the conversation rumble down this dangerous road:

Politics aside, what makes the holiday gathering so volatile? The clash of personalities, the weight of the past, and those oddballs relatives from unfamiliar branches of the family tree. It’s a week early, but given the lessons of history, here is the predicted transcript from my own Thanksgiving dinner, focusing on The Uncles and their beers. (The names, backgrounds, relationships, and personalities have been changed to protect the innocent.)

Uncle Marv swears he could’ve gone to Harvard, but chose acting instead. (Proof of Harvard acceptance is still under review). His lineage is questionable. He’s the only one at the table with a bright shock of red hair. Dad often makes a milkman’s kid references, just out of earshot. This year Uncle Marv will be excited to talk about his recent foray into voice-over work. Specifically the grocery bagging instructional video produced by and for a local chain store, for which he provided the voice.

“It’s not about the money,” he says. “I mean, sure, these are just high school kids learning to bag groceries, but you gotta make it good. And who better? Am I right?” Here he’ll close his eyes and say, “A true artist never wastes his audience’s time.”

As Uncle Marv prattles on as if he were holding forth to James Lipton, he’ll plow through bottles of Arrogant Bastard Ale by Arrogant Brewing. At 7.2% this is a strong American Ale, medium bodied, with some toffee, roasted malt, and a generous serving of hops. The more Uncle Marv has, the better his acting becomes. At least in his eyes.

Uncle Dale will interrupt Uncle Marv by pointing a turkey leg and saying, “You couldn’t act your way out of a paper bag. I’ll show you acting. Gimme a line, any line. I’ll nail it!” Dale is the shortest male in the family. “Shakespeare? Tom Hanks? Keanu Reeves? Come on. Or,” he’ll say, rolling up his sleeves, “we could just take it outside.” Dale once challenged Dad to an arm wrestling contest over an argument about the bartender’s name from The Love Boat.

When no one takes him up on his offer to take it outside, Uncle Dale will sigh and guzzle a Napolean Complex by Wicked Weed Brewing, a 5.0% IPA that begins with some pine and citrus, ends with some nice hoppiness, and just might help him forget his vertical challenges. At least for a session or two.

“Shall I curve the turkey this year?,” Uncle Jack will say, his voice slicing through the conversation. He never says much, but when he does, his words come out hissing like an evil summons whispered in darkness. He is thin, speaks with a vague British accent, and does this weird thing where he scans the room without turning his head. “Happy to slice as needed,” he’ll say and take up the carving knife, an instrument he wields with surprisingly alarming dexterity. Meanwhile, the pint glass by his plate is filled with Jack the Sipper by Southern Prohibition Brewing out of Hattiesburg, Mississippi. This is a 5.0% ESB that pours the dark tan expected of the style. It is malt forward with a hoppy hint and a clean finish.

“Fine by me, chief. Carve away. I’m fresh off a mani-pedi so you won’t see me doing any cutting.” This is Uncle James who is single, oddly ageless, well-groomed, and brandishes very white teeth. He peppers conversations with Barney Stinson quotes and references to his portfolio, all the while making damned sure you notice his Spazzolato Captoe Oxfords from Prada. The beer by his plate is Metro Man by Evil Twin Brewing. The impeccable taste of this Imperial Stout fits James’s taste. The flavor notes—coffee, malt, chocolate complement one another as well as a newly pressed shirt—untucked but neat—complements slim fit jeans held up with a thin leather belt.

In this group, Uncle Jim seems normal, although his haircut always looks a little off, as if it were a plastic sheath of Lego man hair popped onto his head just off-center. He is thirty-three, hates tension, and usually responds to awkward moments  by hurling random factoids into the conversation, like last year when he announced that the average life-span of a spark is three seconds (True story). This year, he’ll reel off the names of pardoned Thanksgiving turkeys during President Obama’s tenure: “Courage, Apple, Liberty, Cobbler, Popcorn, Cheese, and Abe. There are alternates as well, starting with Carolina, Cider—”

There have been at least ninteen ‘Dammit Jims’ in seven Thanksgivings.

As Uncle Jim prepares his next poorly placed bit of random knowledge, he opens a bottle of Nerd Alert by Monday Night Brewing. They call this a Pseudo Pilsner. Technically it’s an ale, but Nerds delight in the chemistry behind this beer. “You see,” Jim will point out, “the folks at Monday Night ferment the beer with ale yeast at low temps, hence the clean, crisp pilsner-esque experience.”

“—Dammit, Jim,” Uncle Paul will say again, as he opens up a bottle of, yes, that’s right, Dammit, Jim! by New Republic Brewing out of College Station. They label it a Texas Amber but its shares the coloring of an American Amber and Red Ale combined. Unlike Uncle Paul’s temper, this is a balanced beer, with nice hoppiness and light caramel notes that work off one another cleanly. Dammit, it’s good.

Either way, the meal will continue, and although someone may stuff the next pocket of silence with a “Speaking of the President” line, the beer will be worth the lively conversation to follow.

This year, perhaps, we give thanks for all the personalities around our tables, and the beer they drink.