Gluten-free – trendy, healthy, high maintenance or life altering. Those are just some of the reactions you might receive when you ask people what they think about gluten-free. In truth, those two words evoke vastly different reactions from just about everyone. For Karen Hertz, gluten-free became part of her life during a treatment plan as she battled and beat melanoma in 2007 and then both papillary thyroid cancer and Hashimoto’s thyroiditis, an autoimmune disease, in 2008. After beating cancer twice Karen developed a passion for health and happiness. This centered around gluten-free options, but there weren’t many out there in the world of beer.

Being highly social, Karen found everyday activities like happy hours, tailgating, hiking or apres ski that often included beer, problematic. While wine, cider and hard alcohol are options, sometimes the feeling of a cold beer in your hand cannot be replaced. So began Karen’s business plan.

Going to beer conferences, many in the industry weren’t sure what to think about the idea of a 100% dedicated gluten-free brewery,  While breweries like Lakefront Brewery out of Milwaukee were making gluten-free New Grist, few breweries were focusing 100% of their time on gluten-free beer.

Not one to be deterred easily, Karen pushed ahead and began looking for a brewer to help make her dream of a gluten-free brewery a reality.

Around the same time, industry vet Wayne Burns was seeking a new challenge. “High Octane” Wayne has been brewing for over 25 years at midwestern breweries such as Local Color Brewing Co., Kuhnhenn Brewing Co. and Bell’s Brewery before moving to Colorado and brewing at Vine St. Pub, Jagged Mountain Brewery and Wynkoop Brewing Co. Karen and Wayne got together, rounded up as many gluten-frees as they could find, and held a taste test. During the taste test, Wayne realized the opportunity gluten-free beers presented as he felt many were lacking something present in gluten beers. 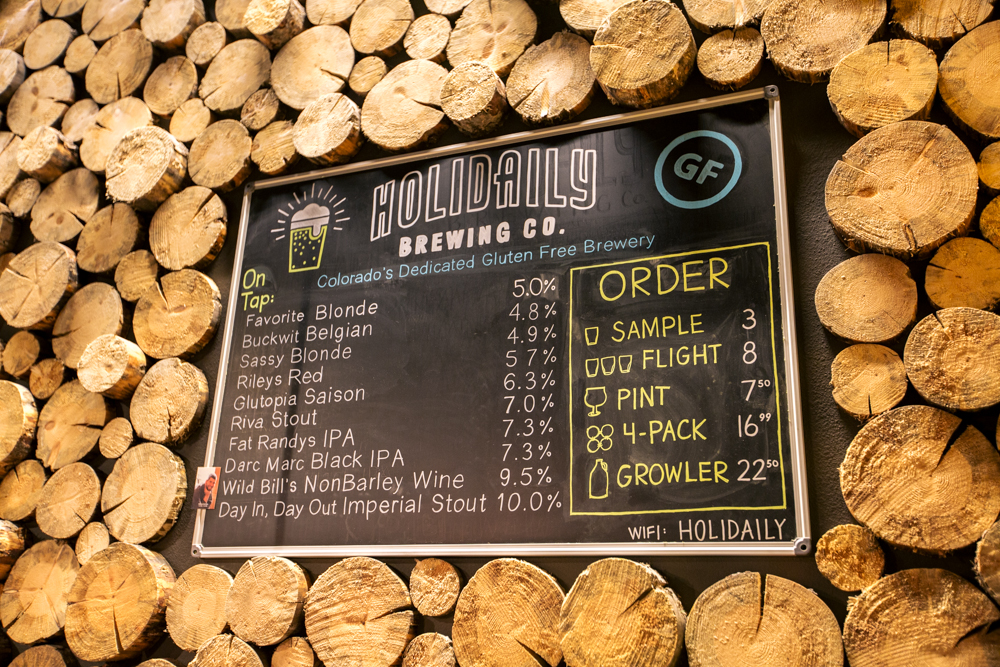 Brewing in their kitchens, Wayne quickly realized many of the styles and even the equipment he was used to using were going to need to be altered in order to use these new ingredients. Many gluten-free beers are brewed with sorghum, rice, and even syrups, but Holidaily has focused initially on millet and buckwheat.

Millet is a small pearl like ancient grain and buckwheat is what I would describe as a chocolate chip looking grain. These smaller ingredients required new lagering screens to be installed during the brewing process to help filter out the particles. Not only did the brewing equipment need to be altered, but the ingredients used needed to be gluten-free certified as well. Luckily, Grouse Malting and Roasting makes gluten-free ancient grains and is located in Colorado.

From buckwheat and millet to quinoa, maize and oats Grouse offers many a handful of different ingredients Holidaily will use in future batches of beer. Exploring these new frontiers, Holidaily has found the other gluten-free breweries to be very collaborative when discussing recipes and how to use the likes of chestnuts, lentils and other ancient grains. Karen and Wayne both do not want their beer to be limited just because it is gluten-free and with so many ingredients out there, the challenge becomes how to use them best.

Holidaily started out with only three gluten-free beers, but when I visited they had 10 different beer styles on tap and already have two of their fan favorites in cans (Fat Randy’s IPA and Favorite Blonde).

Wayne does not have a gluten restriction like Karen, so he will often compare their beers to some of the best in the industry as a litmus test. While at the brewery, I was honestly shocked to see how many styles they had on tap and I learned so much from Wayne and Karen. My three favorites when I visited were the IPA, Black IPA and Imperial Stout.

Fat Randy’s IPA – Very floral and citrusy with a hint of bitterness reminding you it is an IPA.

Darc Marc Black IPA – Bit roastier like a stout, but still has a balanced amount of bitterness from the hops. I hope this one gets canned next!

Day In, Day Out Imperial Stout – Hints of chocolate with a nice roasty finish and super smooth to drink; you might forget this one packs a punch at over 10% ABV.

From a blonde and saison to a black IPA and imperial stout, Holidaily offers a little bit for everyone. Holidaily has seen first-time beer drinkers come in and enjoy a pint and the excitement this brings to some people has coined the phrase “we’ve got a crier.” Holidaily has seen a handful of people get quite emotional with this new found freedom. 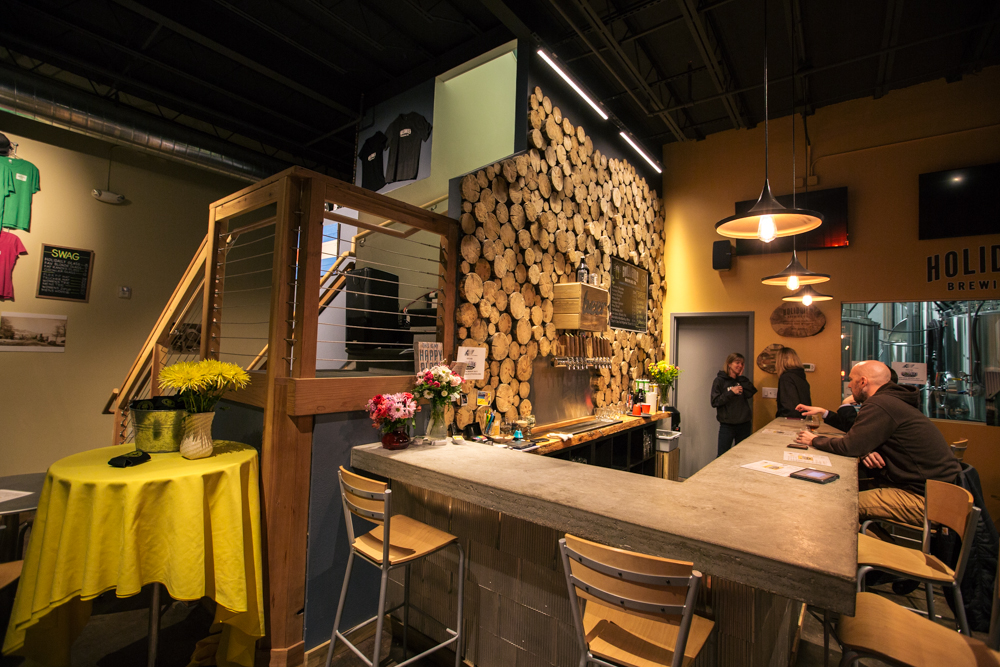 Celebrating their first anniversary on Feb 4, Holidaily is commemorating the occasion in style, with new beer releases, giveaways, live music and gluten-free food and cupcakes! Check out their Facebook page and website for more details! The party doesn’t stop that weekend though as Holidaily will begin increased hours of operation going from Thursday-Sunday to seven days a week.

What better way to celebrate being open for a year than to install new brewing equipment to help keep up with demand? The brewhouse will be getting an overhaul the same month with plans to can a few new beers and help increase distribution. Karen personally knows how difficult it is to find gluten-free beers, so distribution is a priority for Holidaily, to ensure everyone can enjoy a can of cold gluten-free beer and celebrate a holiday daily. 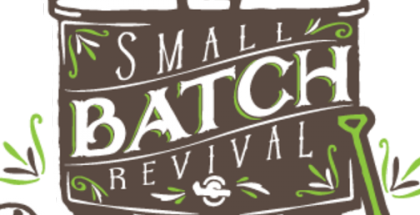