“As any swalwe sittynge on a berne. Therto she koude skippe and make game, As any kyde or calf folwynge his dame. Hir mouth was sweete as bragot or the meeth, Or hoord of apples leyd in hey heeth.” – The Miller’s Tale, from the Canterbury Tales.

Written about since the 12th century, braggots, (also called bragot or brackett) are hybrids. Being part barley-based ale and part honey-based mead, braggots are often associated with medieval times. A few centuries have given brewers enough time to perfect their craft and Flying Fish Brewing Co. has brought us their interpretation of the historic drink- Exit 3 Blueberry Braggot.

In 2009, Flying Fish introduced the Exit Series: a series of big beers that focuses on aspects that derive from the regions of each exit off of the New Jersey turnpike. Exit 3 is home to a vast amount of farmland. Using one of the state’s famed crops, blueberries, Flying Fish has crafted an uncommon style of beer that utilizes the freshest local products the area has to offer: the Blueberry Braggot.

As the largest craft brewery in New Jersey, Flying Fish Brewing Co. has been producing year-round craft beers and seasonal favorites since 1995. Beginning with their flagship ESB, Flying Fish has since produced signature favorites, such as the award-winning Abbey Dubbel, the Red Fish and Hopfish IPA, an English-style IPA. Brewing a wide variety of styles, Flying Fish has produced everything from Belgian styles to IPAs, Pale Ales to the newly retired Forever Unloved Sandy, a brew that doubled as a fundraiser for the Hurricane Sandy relief efforts.

Exit 3 is made only with locally-sourced blueberries and honey, which makes sense since New Jersey is home to the blueberry capital of the world, Hammonton. The aroma of blueberries, honey and herbs will emanate from your glass as you pour the golden straw-colored braggot into a tulip glass. Your first sip will burst with flavors of honey and blueberry and there will be some light sweetness, but it will not become overpowering. Notes of wildflowers & grain will follow and the braggot has a very well-balanced malty character. The medium-bodied braggot has a slightly carbonated mouthfeel, but there is no lingering booziness. This braggot’s smooth flavor is extremely deceiving, so please take your time when imbibing.

With smooth its honey notes, Exit 3 is categorized as a dessert beer. When you are looking for complementary foods to pair with this braggot, consider dishes that involve aged cheddar, such as aged cheddar and parmesan mac and cheese (you will need some serious carbs for every ounce of this 15% ABV beauty) or aged cheddar hush puppies. If you are feeling super medieval, a fancy turkey leg and some dark pumpernickel bread should help soak up all of that alcohol.

Exit 3 is available in 12oz bottle 4-packs and in extremely limited draft. 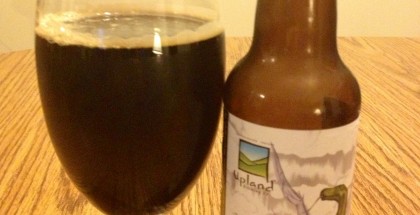