Mainline Ale House is not content with beers from some of the biggest names in the craft beer game. While Odell and Prost have made their presence felt with the previous beer dinners, this time Mainline turned to Snowbank Brewing for their February beer pairing dinner. Big, bold flavors were on display, and Snowbank brought some of its flagship beers to the table, while showcasing new heavy hitters and imperial showstoppers. The meal truly highlighted these beers and the magic that Snowbank is working with in their taproom while showcasing the talented kitchen at Mainline.

Cranknbrew is one of Snowbank’s more well-known beers. The normal Cranknbrew is a coffee pale ale, defined by it’s bright color and wonderful balance of hop and coffee flavor. The Imperial version of the Cranknbrew is stronger and a dark, amber color with some red undertones. It packs a punch that is certain to wake you up (thanks to the caffeine from the coffee), but doesn’t overpower you with a coffee taste. The smell is hop-forward at first, but is finished with the scent reminiscent of an empty coffee mug on a cold morning.

The initial paired beer of the evening was Snowbank’s Cucumber Sourado. The Cucumber Sourado is another spin on one of Snowbank’s flagship beers. The Sourado, according to head brewer and owner Dave Rosso, is a kettle sour that is dry-hopped with citra hops, and this version has cucumber juice added directly into the brew. The beer has what I would call a zesty color, bright and vibrant with some hues of light green to really drive home the cucumber note.

This beer was paired with arctic char, a mixed green salad, compressed fruit, and a chili Tobiko dressing. Mainline’s executive chef Paul described the process of the compressed fruit as simply sucking the oxygen out of the fruit and replacing it with sugars, which made every piece of fruit sweet and an amazing contrast to the rest of the plate.

The arctic char was cooked perfectly, and the fattiness of the fish combined with the sweet fruit and the sourness of the beer was a delicate and well-constructed balance. The amazing piece was the cucumber in the beer shined as the aftertaste, essentially cleansing your palate, and prepping you for the next bite.

The second course was an airline pheasant (a boneless breast with the wing still attached. Get it? “Air” line) accompanied by a purple potato polenta cake, grilled carrots, and a demi-glace made with this course’s beer—Snow Juice Ale.

Snow Juice is another of Snowbank’s flagship beers and one of the tastiest IPAs I’ve had. A New England style IPA, Snow Juice is sweet and citrusy with a wonderful balance of hoppiness, but not one that will destroy your taste buds. Dave explained a bit about the “war” amongst brewers over New England IPAs: the camp that loves them versus the camp that views them as “lazy brewing.” He explained the history of IPAs and how, originally, IPAs from England were all about the bitter, which stemmed from the brewing style and the water. However, with the clean water in Colorado, there is no need to filter things out, rather the brewers in the state get to add minerals they want in their brewing process. With that, there is no added bitterness in this beer, and it is apparent the balance the Snowbank team was able to strike.

This beer was truly the star of the plate. As a demi-glace, the sweetness and tartness from the beer enhanced the carrots natural sweetness, made the pheasant taste meatier and more hearty, and made for a wonderful gravy on the polenta cake.

The third course was a powerhouse. This bad boy came out swinging and never stopped. An espresso rubbed venison with heirloom cauliflower, parsnip puree, and honey habanero sweet potato hash were all paired with Snowbank’s Imperial Cacao Wheat.

This beer is deceptive, as it comes out looking like a Belgian double. A dark beer that still has some opacity to it, you would think you’re going to drink a heavy hitting stout. However, this beer is light with nice hints of stone fruit and the cacao nibs from local Fort Collins chocolate shop Nuance. It’s light at first, but then you get the taste of fruits like raspberry and potentially a bit of plum. The dark chocolate balances the fruit taste, and it brought out the espresso flavor on the venison chop.
The best note from this plate was the way the sweet potato hash worked in unison with the beer. The fruit notes were highlighted from the natural flavors of the honey and the sweet potato, while the habanero and wheat collided for a beautiful, earthy aftertaste. Dessert—the true test of your ability to finish a four-course meal. This course consisted of a flourless chocolate cake topped with ganache, a salted caramel sweet crème, and a cherry dark ale gastrique. This course was paired with a remarkable zinfandel barrel aged raspberry dark ale. This beer was a beautiful dark red, verging on black, and shone beautifully in the low lighting of the room. The taste of this beer on its own was amazing, bursting with countless different flavors that made you wonder what was coming next. The first taste is the tart raspberry and chocolate-esq flavor, similar to a filled truffle you’d find in a box of Valentine’s chocolates. Then the sharp taste of wine comes in hot, with the sweet bite you’d find in a bottle of Zinfandel. After a few sips, it would be easy to mistake this beer for a glass of port, which is far from a bad thing.

When paired with the dessert, this beer truly highlights the cherry and chocolate flavors. I was hard-pressed to not pour the beer over the dessert as a syrup because it worked in such perfect unison. The cake was light and fluffy, and the sweet cream was airy and deceptively looked like a scoop of delicious, caramelized ice cream.

To say this meal was extraordinary would be doing it a disservice. The beer selections were truly exceptional and were flawless in highlighting the food on the plate. If you have an opportunity to attend a beer pairing dinner, especially one at the Mainline Ale House, I would highly recommend you make the trip. Be sure to stop by Snowbank’s taproom, where you will find all of the beers from this dinner currently on tap. Here’s to many more successful beer pairings. 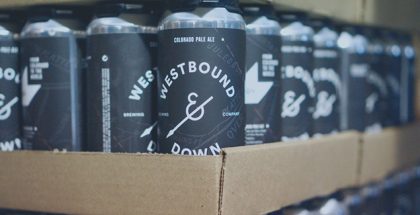