If you haven’t heard about Cleophus Quealy Beer Co. consider this your formal introduction to a great farmhouse brewery in the East Bay! They are located at 448 Hester Street, San Leandro, CA 94577 – which is right by the Oakland International Airport! So, you know it’s good to grab a great beer on your layover or on your way out of town.

Their permanent food truck is Canasta Kitchen food truck, located right outside their taproom. They offer Latin fare, such chile relleno, locos nachos and flautas. Check out their full menu here. Their happy hour (Thursday and Friday 4 p.m. to 6 p.m.) menu features a street taco and one of two beers for only $5! That’s only $5.50 after tax, which is a steal.

They have a seven-barrel brew system, which is the same size they started with. A lot of small breweries start with a system smaller than this, but CQ decided to go big. Their system can yield about 14 kegs from a full brew.

The inspiration for Cleophus Quealy was brewing the low country styles, like farmhouse ales. Dan, one of the founders, lived in Europe for a while and likes the style. Cleophus comes from Dan’s great grandfather’s name and Quealy from Peter’s, another founder, mother’s maiden name.

The style is fun to brew and the ability to play around more with the style was a huge draw. Peter and Dan had met in London, both there for work but independent from each other. Both have brewed together for a long time, maybe 10 to 12 years before they opened CQ. Their homebrew system is actually in the back of the brew house, which they’ll use going forward for experimental brews and other small batch ales.

Although their beers change during each batch, the core of the beer stays the same. They add seasonal ingredients to keep the beers fresh and you won’t generally find the same type of beer on tap week after week. Their tap list changes about every two weeks, or more frequently when a keg kicks. Some of their beers include:

They will be keeping the Saison around, with different variations of it like the Hibiscus Saison. They are also thinking of doubling up on their fruit beers as well. On Thursdays they are starting to tap into smaller kegs of older brews, like their Cassis and Desist which is more of a winter saison.

Cleophus Quealy features the The Menagerie of Distinguished Drinkers. Some of the perks include 10% off your tab all year long, a sweet membership pin and custom Menagerie glassware and growlers. Memberships are for one calendar year, January through December. You also get access to exclusive events and members-only swag.

They have select bottles, glass growlers and what the team calls a “growlitio” – 16 ounce glass mason jars with lids – as well as shirts and tanks.

Cleophus Quealy bottles their wonderful beer but have talked about the possibility of canning fruit beers in the future.

The outdoor patio sits right next the delicious food truck! They even have corn hole for those that want to have a friendly game while drinking great beer. Be sure to order your food at the bar though!

CQ is very dog friendly, with treats behind the counter and a dog bowl by the water tap. You can even tag your pup on Instagram with #dogsofcq.

If you’re ever in San Leandro or the surrounding areas, be sure to check out Cleophus Quealy. The great beers, tasty food and taprooom ambiance won’t disappoint! 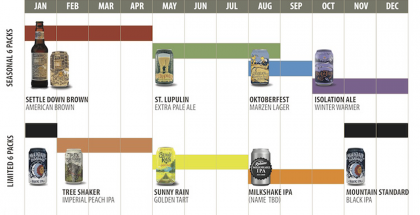 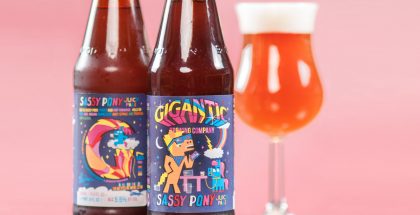