My eyes have seen the glory and I have tasted the nectar of the gods. Sidebar, if you’ve consistently read my posts through the years, you’ll know that I have a tendency to deal in hyperbole when it comes to great beer. That said, all exaggeration aside, this weekend’s inaugural WeldWerks Invitational Festival was the complete package and contends for the title of the best new beer festival in the country.

The proliferation of beer festivals has reached a critical mass, with every non-profit, neighborhood association and now even churches looking to throw a beer festival every weekend of the year. But for the most diehard of beer fanatics, events like Shelton Brothers’ The Festival, Foeder for Thought, What the Funk, Wake Fest, Big Beers Belgians and Barleywines, Festival of Barrel Aged Beers, Beer Advocate’s Extreme Beer Fest, Denver Rare Beer Tasting, and the Firestone Walker Invitational to name a few, have been elevated to an upper echelon of beer events, and after this weekend, the WeldWerks Invitational joins that elite group.

With the intent of creating a truly memorable beer festival experience, the WeldWerks Invitational’s organizers refused to simply rest on the laurels of assembling an all-star cast of participating breweries. Everything from the attendee line check-in process, to the amount of beer requested from each brewery, signage, badges, glassware, venue, brewery hospitality, all down to the music played at the fest, were all carefully thought out and curated and executed. In fact, logistics went so smoothly that volunteers and staff were able to usher-in approximately 600 attendees each session within the span of 7 minutes.

At its core, the event itself was born from WeldWerks co-founder Neil Fisher Jr.’s dream of creating a platform to showcase the city of Greeley to the rest of the world. All proceeds of the sold-out two-session festival went back to supporting the Immigrant and Refugee Center of Northern Colorado with an additional approximately $6000 raised from the silent auction also going toward the local cause as well. But additionally, the event drew beer fans from across the U.S. who patronized other Greeley businesses such as Patrick’s Irish Pub, Wiley Roots Brewing and many more restaurants, and hotels in the area.

But in the end, it really does all return to the beer, and for all of the other positives that were already touched on, nothing was more impressive than the liquid itself. WeldWerks set the bar with a mind-blowing 32 beer lineup, including 13 barrel-aged Medianoche expressions and variants as well as seven more Achromatic Stout variants. Participating breweries also didn’t disappoint as 95% of the beers poured Saturday would normally take best in show honors at virtually any other festival in the country.

And despite the fervor surrounding so many hyped breweries like Meadville, PA’s Voodoo Brewing and Villa Park, IL’s More Brewing, which drew some of the longest lines during both sessions, generally, it was rarer to find kicked beers even at the end of each session. In fact our staff spreadsheet expert, Jaclyn Menendez counted only 7 beers kicked within the first hour and only 23 beers out of over 170 pouring to have kicked by the end of the first session. When asked how much Fundamental Observation Reserve was brought for the event, the Bottle Logic Brewing team simply responded, “We came prepared.”

Now on to the hits! These were some of the PorchDrinking staff picks for the best of the best. Special thanks to Scott Davidson, Kara Rowland, Jaclyn Menedez and Chris Hollands for their contributions.

Standouts of the 2018 WeldWerks Invitational

WeldWerks Medianoche is already an incredible base Imperial Stout that won a Gold Medal at the 2017 GABF, so naturally, they had to make it better by creating insane variants. Single Barrel Malibu Medianoche is my favorite. Maybe it’s the nostalgia of being 17 again, drinking Malibu and Coca-Cola in the garage, listening to Blink-182, and waking up with zero hangover, or maybe it’s the thick fudgy brownie batter aged in a Rum Barrel with toasted coconut and vanilla that allows me to have my dessert and drink it too, either way, this is this my favorite variant.

There were so many Medianoche variant,s that you may have passed Single Barrel Almond Joy Medianoche. That was a mistake. SBAJM, Sah-Baj-Em, was one of my favorite variants after Malibu, because it had a ton of coconut upfront, rich fudgy chocolate, coating every crevasse of your mouth, with a nutty, biscuity, and earthy finish. Any former kid that ate Almond Joys by the fun-size for Halloween, would instantly appreciate this beer and flashback to wearing a winter coat under/over your costume, because Colorado weather hates Halloween.

We knew going into the festival that More was a must-try, but once I got a taste of Double Rainbow, I knew my waiting in line was worth it. Full aroma of strawberries, then caramel, then that batter-boi-pastry-stout-DDB-running-of-man-beards took over and I was in beetus heaven. That vanilla-strawberry aroma and finish had me going back several times. Thanks for dessert guys.

What Cerebral and WeldWerks have become to Colorado for producing elite level barrel-aged stout variants we’re convinced More Brewing has become for the suburbs of Chicago. Their Karma variant of Barrel-Aged Henna incorporated coconut, cinnamon and cacao nibs, combining for the perfect balance of sweetness, spice, and of course everything nice.

Take a brief scroll through the check-ins on Untappd for this beer and you’ll quickly realize that this may have won the show, or at least a close second to my next beer. Rocky Road is that same Cerebral fudgy fudge Stout soaked in chocolate, that is then aged in Breckenridge Bourbon barrels conditioned on Dominican Republic cacao nibs, marshmallow, vanilla and almonds. I am salivating thinking about drinking this beer again as I write this. It pisses me off how early I will need to wait in line for this beer now, knowing that everyone else that tried it will be there too. I have no idea if it is being released, but this is my plea with Cerebral to make my dreams a reality. Best Stout at the festival, that is saying a hell of a lot if you look at the competition.

Amongst the sea of Barrel-Aged Stouts there emerged a clear favorite from our team when it came to variety. Angry Chair out of Tampa, FL joins a growing list of Florida breweries that has perfected ajunct Berliner Weisses and their Yellow Puffs was no exception. This tropical fruit forward gem featured a burst of tart flavors from the use of passionfruit, guava and soursop that was mellowed by a pleasant sweetness from marshmallows.

Kane Brewing A Night to End All Dawns

The legends were true when it came to this silky smooth complex barrel-aged stout from New Jersey’s Kane Brewing. Bolstered by a strong backbone of dark fudge chocolate-y and a hint of vanilla from the 4 Noses barrel gives ANTEAD the distinction of one of the best non-variant BA Stouts at the fest.

The marshmallow hype train charged at full steam during this weekend’s fest, but one of our favorite mallow’d finds was Bottle Logic’s collaboration with Great Notion, a Bourbon Barrel-Aged marshmallow, blueberry and cacao nib Stout. Think a chocolate blueberry muffin in beer form and you’ll have Bottle Logic’s Paisley Cave Complex. Sure Fundamental Observation Reserve was divine, but Paisley Cave Complex stole the show in terms of originality for us.

Consider me half off the hazy New England IPA hype train at this point, because at a certain point, a majority start tasting the same. That said Chicago’s Hop Butcher for the World’s Blazed Orange Milkshake made me rethink everything I knew about the style. Think orange creamsicle smoothie in beer form, this gem was exactly the bright refreshing alternative to our sea of BA Stouts.

While we would have thought there’d be more Barrel-Aged Barleywine submissions this weekend really the only one you needed came from Richmond, VA’s The Veil Brewing. Exhibiting a beautiful blend of raisin, maple syrup and oak notes, this rich emulsive Barleywine balanced it’s boozy sweetness by a cocktail of flavorful complexity.

It’s not often we’re surprised by a sour/wild producer these days but Barrel Culture’s ability to make nuanced but expressive sour beers was truly a revelation. From the Passionfruit – Pineapple – Beets, to the Strawberry Tangie Dream, every offering innovative, distinct and absolutely delicious.

St. Louis-based Perennial Artisan Ales warned festival-goers ahead of time that they only had six bottles of Barrel-Aged Abraxas on hand, so the hype over this special version of an Imperial Stout brewed with ancho chili peppers, cacao nibs, vanilla beans and cinnamon sticks was through the roof. Like clockwork, ticketholders at the head of the line flocked to the Perennial table as soon as the doors opened each session. And with good reason — the velvety smooth concoction with a mild amount of spice tasted divine.

This the greatest of the great white whales of festival beers. It is also the top beer I tasted, with or without the hype. Amalgaam is a blend of 50% 14-month old Amalgam Brewing Freeform and 50% Bokkereyder 2-year old Lambic. Bottles were poured and quickly gone for each session… and then six bottles of Pjassel were raffled off for charity. Those six bottles raised almost $6,000 alone, meaning that each bottle sold for almost $1,000. I got to touch two of those bottles and I know the owner well. I hope that I am able to drink one bottle, but I understand if she doesn’t share hint hint, please God, please make her share.

It’s hard to imagine a world where Firestone Walker goes unnoticed at a festival, so we won’t. As Eric Ponce continues to refresh FSW’s barrel-aging program with special barrel project adjuncts and unique barrels, we had to get a taste of their Coconut Rye Parabola and were not disappointed. Our Mutual Friend’s 100% Colorado malt Helles alongside FSW’s Pivo Pils and TRVE’s Cold were all the sessionable crushers we needed to cleanse palates and revival beers needed to survive the fest. Wiley Roots continues to impress every time we taste their Packed with Peaches and Vanilla Pseudonym, and holy hell… wait till you try their Citra-hopped Funk Yo Couch. Casa Agria’s Guava Fresca Batch 1 was fantastic, and Amalgam’s Balaton Reduction Cherry Eisbier is an absolute revelation. Black Project’s Peach Rye Nectarine Stargate was extremely impressive. We wonder how much longer Primitive Brewing’s Excessively Business Casual Lambic-styled ale can continue to fly under the radar and oh did we mention Jester King brought Spon?

By all accounts, WeldWerks nailed their first foray into throwing a major beer festival. Every. Detail. Having attended a number of festivals through the years as media, consumers, organizers and brewery staff we’ve never been more impressed with a beer festival, let alone a brand new one.

While it usually takes a few years to find the right venue, to figure out the appropriate amount of tickets to beer ratio, to attract the must-try breweries, to get a solid stable of volunteers, and to learn that you can’t treat brewers like shit and not pay them for their beers, WeldWerks honed in on achieving the holistic beer festival experience and it showed.

The only feedback we’d provide was the lack of merchandise available to buy, but that’s because attendees were so stoked on the event, that they wanted to rep and remember the experience afterward. A major kudos to the staff, volunteers and organizers of the WeldWerks Invitational, and now we hawkishly begin stalking Untappd for the next update the 2019 edition of the WeldWerks Invitational. 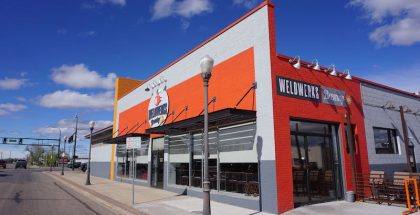 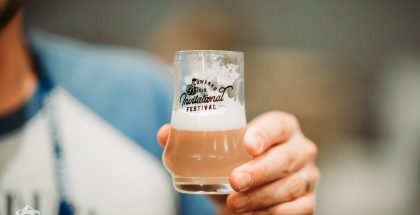