Bootlegger’s Brewery sold their first keg of beer in 2008. It was originally located in Fullerton, California in a small industrial building in an area that was a little rough around the edges. The brewery felt closer to a neighbor’s garage than it did a commercial brewery. Since then, they upsized the brewhouse from a 7 to a 30 barrel system. They moved the main brewing operations to a larger industrial area while staying in Fullerton. They also open their third tasting room location in Costa Mesa to go along with the Fullerton and Redlands locations.

Black Phoenix is a coffee chipotle stout that comes in at 6.7% ABV. First brewed in March of 2009, this beer has been a local favorite since day one. The coffee and chipotle work great with this beer while not overtaking the base stout flavors. Bootleggers enlisted Kean Coffee, a local roaster to provide a custom blend to add the bold coffee flavors. The dried chipotle peppers are added to both the mash and boil to give this beer a zip of spice without making the beer a heat bomb. 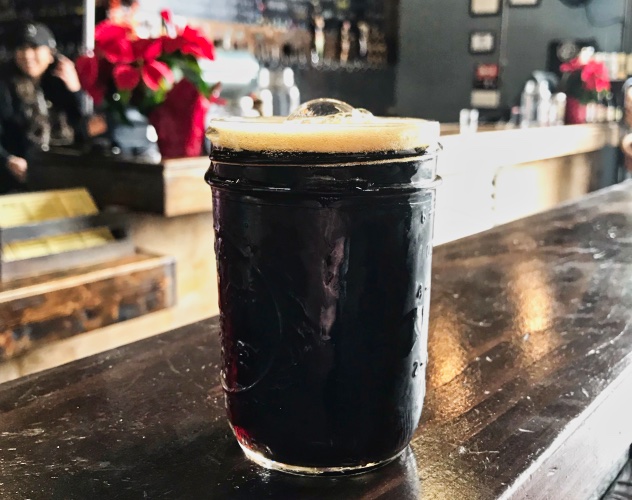 To start, the aroma is roasted cocoa. The spice of the chipotle peppers begins to come in as you sit with it awhile. This beer drinks in layers. If you were only to take one sip, you might only get a bakers chocolate bitterness and black coffee roast. As you drink, the chocolate gets muted a bit and the heat of the chipotle comes in. The more you drink, the more the heat of the pepper tickles to the roof of your mouth and tongue but never gets overpowering. While the coffee is present all the way through, it works more as a complement to the pepper heat, than being a traditional coffee beer. The beer finishes clean and dry with just a bit of lingering heat.

The current craze of the pastry stout makes it difficult to find a stout that has both a manageable ABV and retains the traditional stout characteristics. Yes, Black Phoenix may not be 100% traditional, but the coffee and chipotle additions work in tandem with the base beer and don’t overpower it. As this beer enters its 10th year of production, it’s still a unique beer that transcends fads. No candy bars. No marshmallows. No sugary sweetness.

Bootleggers have been canning for a while, but this is the first time Black Phoenix has seen this format. Definitely a welcome addition.

The Longer the Government Shutdown Goes On, the Bigger Problem it Becomes for Craft Brewers

Hear from the Experts: National Brewers Reflect on 2018 Year in Beer