Brewed in Cherry Hill, New Jersey, 1916 Shore Shiver is an American IPA clocking in at 6.9% ABV. This beer’s huge hop bill includes Mandarina Bavaria, El Dorado and Comet in the boil with a dry hop of El Dorado, Huell Melon, Cascade, Denali and Mosiac. Pouring an amber to copper-colored body with a tawny/off white head, it gives off aromas of pear, papaya, apple (NOT acetaldehyde), hay and sweet orange. Flavor follows the nose with the addition of pine and a biscuit-like sweetness. Shore Shiver has a drying, tannic feel to it but the underlying sweetness, dry hopping and finish of stone fruit flavors keep everything in balance.

Forgotten Boardwalk seemingly has a love for the “peculiar,” especially when it comes to New Jersey. Therefore, it’s not a surprise the name 1916 Shore Shiver is a reference to the state’s history and folklore. The beer gets its name from a spree of shark attacks in the early 20th century. I grew up around the area of this occurrence (C-Beach represent) so the “campfire” story I heard as a kid is this: “In the early 1900s a shark, (which many people claim was a bull shark but was actually a juvenile great white) swam up Matawan Creek, causing panic in the community. The people threw dynamite and nets into the water in an attempt to capture the shark. Some say the predator was found with everything from tires to license plates in the stomach while others say it was never found.” That is just the “children’s story” and the true story was said to have inspired the movie Jaws. However, as to not make light of the situation and out of respect for those involved, you can read the true story here for yourself. 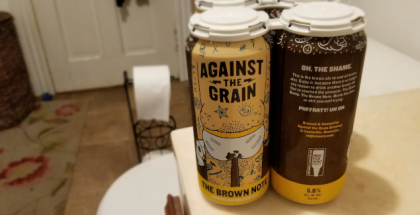