In addition to the eight different BCS’, Goose Island will also be releasing a three-year vertical box set with the original Bourbon Counties from 2017-2019.

Ready for the lineup? All beers will be released in traditional fashion on Black Friday.

The classic beer that began the barrel-aging style so many years ago. The beer this year spent time aging in a mix of Heaven Hill, Buffalo Trace, and Wild Turkey barrels. Expect a richer, thicker mouthfeel than years past according to the brewery.

“We’re really excited for this year’s release; Bourbon County Stout Original is one of the best yet with lots of rich chocolate and fudge notes,” Brewmaster Keith Gabbett said. “We’ve pushed our own expectations of what a BCS variant can be, which has resulted in some fantastic versions.”

For the past few years, Goose Island has had a Double Barrel variant that never made it into bottles. Instead, the rare release was featured occasionally at the taproom and special festivals like FoBAB. Finally, the beer makes its debut in mass production. Based on images released from Goose Island, it looks like this variant will have its own separate box.

Spending twice the amount of time in barrels as traditional BCS, 2-year Reserve is a new twist on a variant that has been in the lineup for the past two years. The brewery used 11-year-old Knob Creek barrels which results in an oak-forward flavor with chocolate, hazelnut and maple.

For the first year since the brewery started doing the Reserve variant, Goose Island is releasing a second Reserve in the same year. For this variant, the beer spent time in Rittenhouse Rye barrels giving the beer a spicier taste that you would expect from a rye whiskey.

If you were following along with the sites that were tracking the labels as they were approved by the TTB, you’ll see that Prop this year was exactly what the first labeled showed.

In an homage to the past few years, this year’s Prop features the fused flavors of toasted pecans, coconut, cocoa, and vanilla. It will be interesting to see how the flavors show up in the beer on the actual taste.

Wheatwine made its debut in the lineup last year and ended up winning a medal at FoBAB. This year the beer was aged in Larceny wheated bourbon casks. You’ll get notes of caramel, toffee, vanilla, and butterscotch. If you liked last year’s version, you should be a fan of this year’s version.

Last year fans of Bourbon County were caught off guard when there was no straight coffee variant. The coffee barleywine worked for some but for those that really liked the coffee variant, it felt like 2018 was missing a key beer.

This year coffee is back. Goose Island added Intelligentsia Coffee beans and cold brew to the beer but then also included cassia bark, orange peel, and panela sugar garnish. It seems like this will be a coffee variant with other underlying flavors. Great to see coffee back, but if you wanted a straight coffee BCS this year, you’ll have to wait another year.

A love letter from Quinn Fueschel, the brewer behind Prop 2017, to his wife who loves cherries, Mon Chéri is this year’s fruited variant of BCS.

Mon Chéri is made with Balaton and Montmorency cherries and brewed with oats and brown sugar. Expect flavors of cherry cobbler, vanilla, and chocolate in one of the more complex fruited versions of BCS to come out.

“I had been toying with using granola in Bourbon County Stout for some time, and cherry has been a classic flavor in stout, and it was my wife that thought to marry the two together,” Fueschel said. “After many tweaks, we found a nice mix of granola, oats and brown sugar, that gave us a ‘pie crust’ element to the beer. Mon Chéri is ‘my darling’ in French, a nod to the inspiration of this variant blend, and Megan is beyond excited to have Cherry back in BCS.”

It’s great to see Double Barrel make it into bottles this year. After having this beer at the taproom on draft, I love the barrel-forward flavors it had and I’m hoping the bottled version delivers.

Both Reserve variants are ones that I’m very excited to try. I’ve really enjoyed Reserve the last two years, in fact they had been in my top two variants in 2017 and 2018. In a time where the trend is to take barrel-aged beers and try to mask the barrel flavor, I love that Reserve really highlights and focuses on the barrel.

That being said, I’m intrigued by Mon Chéri and Café de Olla. When I saw the label leak for Mon Chéri I was hoping that it was real. While I’ve always loved just a straight coffee variant, I was in the crowd that didn’t think coffee barleywine last year really give the coffee fix fans what they wanted.

While still not a straight coffee variant, I’m glad that Goose Island strayed away from the coffee barleywine this year and really focused on coffee being the star in the beer again. The additional flavors of orange peel and sugar I hope will not detract from the coffee.

What Didn’t Make the Cut

As I mentioned at the beginning, each year Goose Island submits many labels to the TTB. Many of those beers don’t make it into bottles, but it doesn’t mean the beer isn’t real. Last year at least one of the beer labels that got approved but didn’t make it into bottles was actually being made at the brewery. It still has not been released to my knowledge.

This year several labels were approved but those beers did not make it into the bottle lineup. Bourbon County Oyster Stout was a far-fetched idea but the label did get approved. Oyster stouts had their moment years ago but the style never really took off. To think that Goose would put that style into their national lineup was tough to believe.

The brewery also got a label for Double Dry-Hopped BCS which had to be a joke based on where the craft beer industry is today. Could they do a DDH version of BCS, sure, but again I think that was the brewery just trolling everyone.

Finally, Bourbon County Brand Irish-Style Coffee Stout was approved but didn’t make it. Of all the labels that got approved but not used, I was most disappointed that the Irish-Style coffee stout didn’t make the list. Described as a beer aged in Irish whiskey barrels with coffee and lactose added sounded really good. If I had to guess, this beer is real and will make an appearance at the taproom at some point late in 2019 or a cold winter Sunday in February.

Now that you know the beers, what’s your plan for Black Friday? 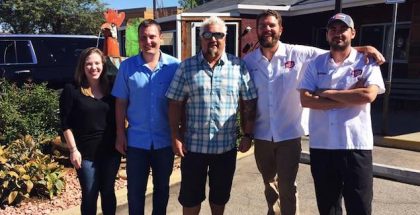 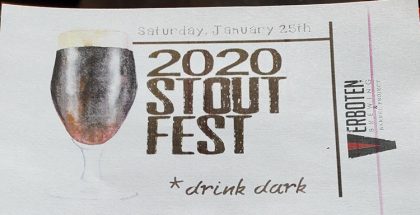