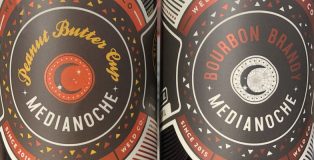 In the ever elusive world of beer rarity and hype, one of Colorado’s most heralded breweries has announced the next big release that’s sure to garner instant attention. WeldWerks Brewing, out of Greeley, CO, announced this morning that it will be releasing Bourbon Brandy Medianoche and Peanut Butter Medianoche as the next two installments in their vaunted bourbon barrel-aged stout series.