Oregon Brewers Festival (OBF from here on out): So let’s first go over some of the logistics of OBF.  As I said in my previous post, there were about 80 or so breweries present, and it’s all outdoors. Unlike other beer fests, you also choose how much beer you get at each booth. Do you only want a sample? That’ll be one token. A full mug of beer? Four tokens. It’s really a beautiful system. 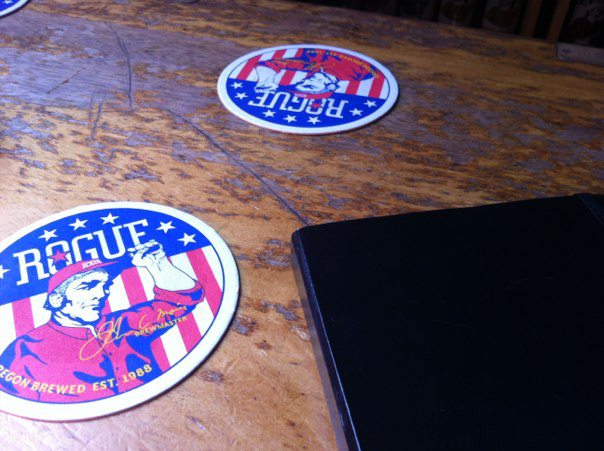 Just about every microbrewery in the Northwest (with the occasional Colorado brewery) was represented, each offering one or two options. The best? Read my review here, but Russian River knocked it out of the park again with their Story of Simcoe offering.  The most disappointing? New Belgium, which only showed up with Somersault; it’s decent but a forgettable summer seasonal.

So we survived. Some of us better than others. I was among a small segment of our group that somehow remained upright and toured other parts of Portland that night. Highlights (and note, my recollection is spotty at best – thanks OBF) include a small winery located a block from the Urban Cabin and my return trip to The Green Dragon for more Pliny.

Day 2: The Reckoning: Oh, hangovers. We all know about you, yet we continue to go back and repeat our same mistakes.

We started the day in the best/only way anyone should while hungover – at a biscuit place. This isn’t just any biscuit place. I know I’ll be shunned by my fellow PorchDrinkers who swear by Denver Biscuit Co., but this place absolutely puts every other biscuit to shame. Ladies and gentlemen, I give you Pine State Biscuits. Behold, the Reggie. 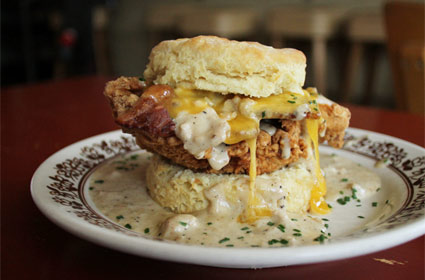 I like Rogue, but it’s never been a beer I would go out of my way to get at a liquor store. Some of their more widely distributed beers can be a bit pricey for what you get. But, I had to visit this brewpub. I had heard good enough word of mouth to make it one of the few planned destinations of the trip.

There are about 38 taps, most of them Rogue or at least Rogue affiliated brews. The best of the bunch were the Chatoe Rogue beers, including:

First Growth Oregasmic Ale: The closest to a prototypical summer beer from Rogue, the fruity/citrus notes are definitely there, but it still retains a very mild taste.

Freedom Hop: Definitely the first time I’ve ever tried a beer that combines floral/spruce/citrus to such great effect. It may not even be as good of a beer as I’m remembering – I was just in awe that they pulled it off.

First Growth Good Chit Pilsner: Not typically a huge fan of this style of beer, but this one was rather enjoyable. More malty than I’d typically expect a pilsner to be.

Next stop was Deschutes Portland Brew Pub for food and, you guessed it, more beer. Deschutes has always been a favorite of mine. I’ve recommended it for cooking and generally order it whenever I get the chance. So it was a no-brainer that I had to fit in some time to visit their Portland location.

The food was general brewpub fare – nothing remarkable, but certainly not terrible. But, we really weren’t there for the food. It was the sideshow to the main event – the beer. There’s just something about trying a fresh pint of Chain Breaker or Inversion IPA that just can’t be beat. And specialty brews? Try Hop in the Dark, a black IPA that so desperately wants to be a coffee stout. Neck and neck with Story of Simcoe as my favorite of the weekend.

I’ve left out several dive bars that were visited at the end of each night, when writing notes and “remembering” things was generally discouraged by my friends. It was a fantastic, hipstery trip over all. Portland is a city you’ll need to visit if you haven’t already, and one that is not long out of the psyche if you already have.

It was a pretty amazing trip. Unreal. Like, I have a lot to tell you.