Hair of the Dog is a legend in the Portland craft brewing scene. Founded by homebrewer Alan Sprints in 1993, Hair of the Dog has been barrel aging beer since the early 90s and has been regarded as a notable pioneer of many distinct styles for decades.

The company opened a beautiful new tasting room in the Warehouse District of inner SE Portland in 2010 and have a fantastically low priced tasting flight and distinct menu comprised of locally sourced foods (the brussels sprouts, pickle plate and vegetable saute are all incredible). I highly recommend putting the tasting room at the top of your list of breweries to visit in Portland. Nationally renown, unique, strong ales such as Adam and Fred or the wintery barlyewine Doggie Claws get much of the attention and are well deserving of three of the four tasters in your flight, but the Blue Dot Double IPA is essential to any tasting selection. 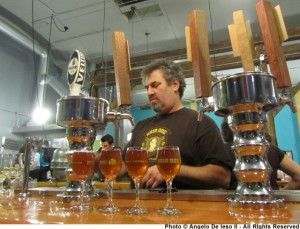 Blue Dot is unlike any DIPA that I have ever tried. I had my first sip in 2009 and have been hooked ever since. My favorite pint was enjoyed at the tasting room after a walk across the Hawthorne bridge at the conclusion of my visit to the Oregon Brewer’s Festival in 2012. The Blue Dot at the tasting room was without a doubt better than any beer that I had at the festival, which is saying a lot!  The bombers are always a fairly limited release, so I was happy to see Blue Dot’s Summer 2013 release become available this week.

Blue Dot pours a hazy yellow-orange with a thin white lacy head. There is a generous amount of bottle conditioning yeast settled at the bottom. The smell is extremely tropical with mango, pineapple and tangerine in the nose. These tropical fruits also dominate the flavor complimented by the organic Gambrinus Pilsner malt. The rye malt is extremely present in the crisp soapy finish that has a spicy alcohol burn for the 7% ABV level. The sticky yet soft mouth-feel lingers with a very sweet hop flavor with a shockingly low bitterness for this 80 IBU DIPA. This beer is for hop heads and big beer fans alike. If you don’t live in Portland, consider this beer one of the main reasons to set up an exchange with a Portlander! 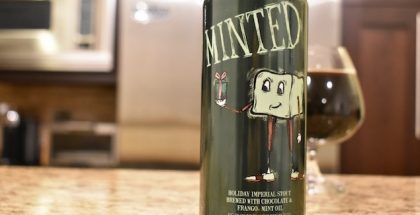