The nightlife in the Navy Yard neighborhood in Washington, DC, is usually quiet in the winter, when the Washington Nationals baseball team heads to spring training in sunny Florida. The neighborhood is industrial, a work-in-progress, with fresh condo developments and a small handful of new restaurants seeking views of the Anacostia River.

But on a freezing night late in 2013, it was standing room only at the Bluejacket. A four-hour wait at the Arsenal, the brewery’s restaurant? The hostess wasn’t joking. Both the Bluejacket and its dining room have quickly become powerful drivers of the beer scene in this brew-thirsty city. The team behind Bluejacket is a mix of individuals with backgrounds that range from time at the Allagash Brewing Company and the village of Oostvleteren in Belgium and then roots in Washington, DC, itself.

Greg Engert, Bluejacket’s beer director, was already a household name along beer lovers in the DC area as the beer director of the Neighborhood Restaurant Group, which operates a handful of popular establishments, including ChurchKey on the bustling 14th Street corridor. He originally moved to the area about a decade ago to pursue a master’s degree at Georgetown University — craft beer sidetracked his plans. Engert was recently named Beer Person of the Year from Imbibe magazine; Food & Wine has called him a Sommelier of the Year, the first nod to a beer professional.

Bluejacket opened late in October 2013 with a playground of brews: a sour blonde, a spice session apple ale and five cask ales have been some of the offerings. The Bluejacket team took a moment to share with PorchDrinking.com some of their views on brewing and the brewery’s popularity.

Here are their bios. (Photo courtesy of Bluejacket.)

Bluejacket has only been open since October, however it has made quite the impression on the DC brewing scene. What have been some of the most exciting moments over the past few months? What has surprised you all?

Greg Engert: One of the surprises for me has been my newfound desire to balance our brewing approach when it comes to style. Years ago, when this project began conceptually fermenting, I thought we’d concentrate on ceaseless stylistic variation; the idea of having a stable of flagship brews continually available seemed far less intriguing than the possibilities offered by trying our hand at a wholly new brew each time out. Then we started releasing our brews, and I found myself as interested in tweaking a newly released brew as I was in brewing something completely new. We are continually learning the nuances of our brewing system, our ingredients and our processes, so once we taste a fresh batch of a Bluejacket ale or lager, we immediately begin flavor analysis, noting the characteristics we love and those subtler notes we’d like alter the next time out. Crafting that next, slightly different batch has become as engrossing as trying our hand at a wholly new recipe. The Bluejacket draft and cask list has become more balanced as we continually offer a handful of standby brands, each getting better and better with each successive batch, alongside a steady arsenal of innovation and experimentation. We opened with 25 singular drafts and casks and have released almost 20 additional unique beers since … in the meantime, five or six brews have become mainstays on the list.

What have proven to be among your most popular brews?

Bobby Bump: Forbidden Planet, 9 Pound Hammer and Lost Weekend. I think we have some pretty solid IPAs in our lineup right now and the Forbidden Planet (a classic Kölsch that we dry hop with a large quantity of galaxy hops) is a very approachable beer for beer drinkers of all levels.

How have your brewery tours been received?

Engert: The brewery tours have been hugely successful. Each one offers us an extended opportunity to truly showcase each facet of our brewery, providing an informative underpinning for each and every Bluejacket brew. The Tasting Tour additionally — and viscerally — highlights the flavors and methods discussed throughout. The Beer & Food Experience Tour is the ultimate culmination of our project: brewery background notes and beer tasting abide, along with the culminating marriage of Bluejacket beer and the wonderful culinary creations of Executive Chef Kyle Bailey. We are continually excited to encompass the entirety of our boutique brewery, restaurant and bar with these tours, and we feel that these hyper-informative walk-abouts provide a singular kind of brewery visit, one perfectly suited for the uniqueness of our brewing concept as a whole.

From where do you and your brewers draw inspiration?

Owen Miller: Our inspiration draws from all aspects of life. The most present inspiration is that from our individual experiences in this industry. We discern what beers we enjoy, what we don’t and we try to hone our techniques to produce a beer that has those qualities we enjoy but also something a bit different, our own touch. Food and flavor combinations are always sources of inspiration. I’m a bit of a traditionalist, most of the time, so I’m interested in how we can develop the most complexity and enjoyment from a beer by using just the traditional ingredients: water, malt, hops and yeast. These are usually the beers I enjoy drinking the most.

What do you hope this upcoming baseball season will bring for your brewery?

Josh Chapman: Opportunities to share great beer with the people of D.C. I know it sounds cliche, but our favorite moment after brewing a beer is the moment we get to tell the story behind it to the customer with glass in hand. It’s why we do what we do, and it’d be great to do it more and more.

How are you staying involved in the development of the Navy Yard area of DC? What would you like to see this neighborhood look like in, say, five years?

Chapman: I’d love to see it bustling with activity and culture all its own. Growing up [in the] southeast along the Anacostia, it had a culture of violence and exclusion; nothing would be better than to see that turned on its head and for it to become an area of beauty and incorporation.

Do you (or any of your brewers) have a personal favorite beer-and-food pairing among your menus?

Engert: The breadth and depth of our draft and cask list offers ample opportunities not just to find a suitable brew for any palate, but also for any plate coming out of chef’s kitchen. As such, I have a host of go-to beer and food pairings, including our Panther Schwarzbier with beef heart tartare, Black Eye Robust Porter with liverwurst mousse and Twit Sour Witbier with our Tuscan kale Caesar salad. 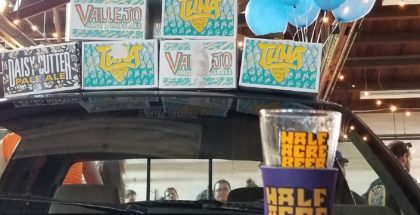