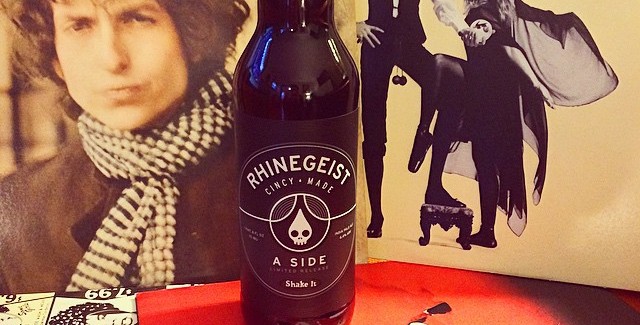 Rhinegeist A Side combines two of my great loves: alcohol and music. I’ve seen probably close to 100 bands in concert and tasted countless more beers. Conceived by Jim Blase of Shake It Records in Cincinnati’s Northside neighborhood and frequent Shake It patron/Rhinegeist distributor Pete Fernandez, this limited release IPA was brewed special for this year’s Record Store Day. Inaugurated in 2007, Record Store Day takes place the third Saturday every April and is “a way to celebrate and spread the word about the unique culture surrounding nearly 1400 independently owned record stores in the US and thousands of similar stores internationally.”

Sold in 22-ounce bombers, A Side pours a golden, amber color with a three finger head that never fully dissipates and leaves a thick lacing on my glass. With a citrusy aroma and pine flavor, it’s the perfect beer for spring. The “yin/yang” of Rhinegeist’s brewing philosophy is “hoppy/sessionable,” and the Pale Ale, Carared, Vienna and Flaked Rye malts balance out the Bravo, Centennial and Citra hops nicely. Even at 75 IBUs, A Side is extremely easy to drink. So easy, in fact, I’m most likely going to finish it in its entirety at 1:30 in the morning, despite having to be at work at 8 a.m.

If you can still find it, I recommend picking up a bottle of A Side and jamming out to the new Mumford & Sons album (or whatever you’re into). For my Cincinnati friends, I bought mine at Jungle Jim’s last weekend. It also looks like they may still have it on tap. Either way, good luck on your quest and rock on! 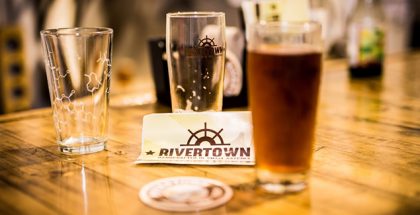 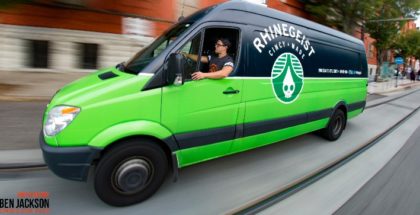